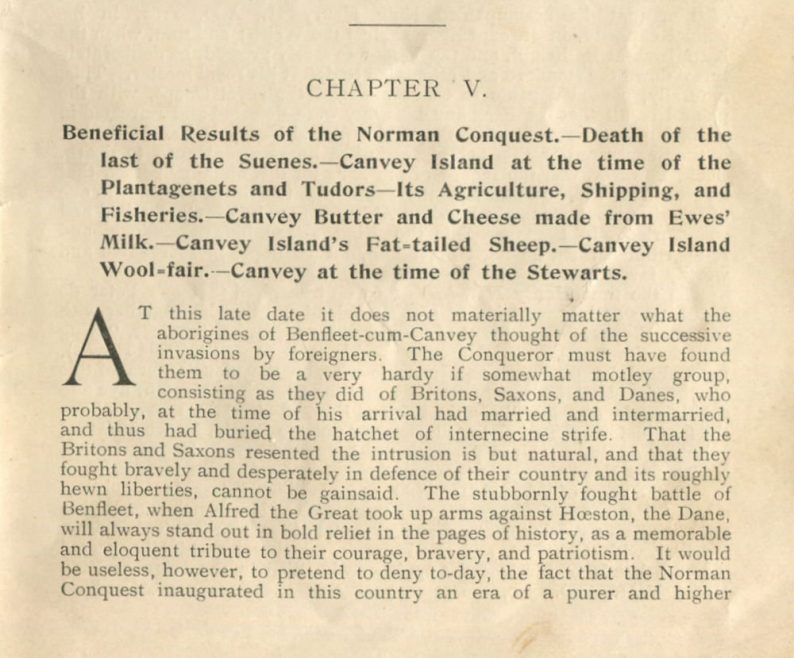 At this late date it does not materially matter what the aborigines of Benfleet-cum-Canvey thought of the successive invasions by foreigners. The Conqueror must have found them to be a very hardy if somewhat motley group, consisting as they did of Britons, Saxons, and Danes, who probably, at the time of his arrival had married and intermarried, and thus had buried the hatchet of internecine strife. That the Britons and Saxons resented the intrusion is but natural, and that they fought bravely and desperately in defence of their country and its roughly hewn liberties, cannot be gainsaid. The stubbornly fought battle of Benfleet, when Alfred the Great took up arms against Hæston, the Dane, will always stand out in bold relief in the pages of history, as a memorable and eloquent tribute to their courage, bravery, and patriotism. It would be useless, however, to pretend to deny to-day, the fact that the Norman Conquest inaugurated in this country an era of a purer and higher civilization, Its softening and refining influences were, in their result, so far reaching that it gave to us much that has rendered the nation enlightened, and its people humane. As if by magic it rescued us from a state of semi-barbarism to one of comparative civilization, and initially wheeled us into line as a commercial and colonising people. Hence it may be presumed, that the primitive dwellers of Canvey Island, benefiting all along the line, calmly settled down to the peaceful vocation of the cultivation of the soil, and followed agricultural pursuits generally, for we find nothing particularly interesting about that spot worth mentioning until the time of Henry II, when we find that the Suene family, having come ignominiously to grief, lost all control over the Island and consequently it passed into other hands. In fact all the possessions of the Suenes at this time, consisting, according to Doomsday Book, of no less than fifty-five manors in the County of Essex, were confiscated to the King. To have acquired all this property in so short a space of time, there is no doubt but that a vein of rascality and land-grabbing strongly pervaded the Suene tribe. Their domination, however, came to an abrupt termination in 1163, when Henry de Essex, the grandson of the original Suene whom we previously mentioned, was charged with cowardice, disgraced according to the custom of the time, and finally dispossessed of all his honors and landed possessions. Amongst other honors this Henry de Essex had bestowed on him, was that of the coveted appointment of “Hereditary Standard Bearer to the King.” It is recorded of him that he accompanied King Henry II., A.D. 1162, in his official capacity, in an expedition against the Welsh; and that, when the battle was at its height, and the King was sorely pressed, he deliberately threw down the standard and attempted to desert his royal master. This, naturally, caused a panic to ensue amongst the royal troops, with the painful result that the King and his army were defeated and retreated in confusion, not, however, until they had captured Henry de Essex—the last of the Suenes. For this act of cowardice he was sentenced to death. Such, however, was the regard of the King for this unhappy person that he spared his life, and subsequently commuted the death sentence to one of imprisonment for life in Reading Abbey, where he eventually died and was buried. In the meantime the King seized his possessions, and re-distributed them amongst other and, let us hope, more reliable and worthy favourites.

In the time Henry III., A.D 1263, it transpired that one Peter de Moubery was in possession of Canvey Island and that he, together with his wife Eigena, made a grant of the marsh land called Westwicke, “lying between the marsh called Horemore and le-Hole-hauene” (Hole Haven), unto one John de Longe and Joan his wife, on the pious tenure of this worthy couple ” rendering unto God, and the Church of Morton, five and a half marks annually.” In the reign of Edward II., A.D. 1322, we have the first historic record of the illustrious Appleton family, for we find that John de Apeton acquired possession of Lymwerd marsh, Canvey Island, of Peter de Heneingham in this year.

In the reign of Edward III., A.D. 1340, William Fitz-Peter, doubtless a son of Peter de Moubery, granted the marsh of Northwick-cum-Wykes unto William Woodham at an annual rental of two marks. This marsh, together with Chaffleet and Fatherwick marshes, eventually passed into the hands of Sir Roger Appulton, who died in the reign of King Henry VIII., A.D. 1530, the same year that the once great Cardinal Wolsey died. In the same reign, A.D. 1543, we find that one Edward Baker, Esquire, held three marshes in ” Canweye,” known as Knightswyke, Southwyke and Attenash, In the year 1557 when Bluff King Hal’s daughter, Queen Mary I. held regal sway over these dominions, a grandson of Sir Roger Appulton, bearing the same christian name, succeeded to these and other portions of the Island, called Northwicke and Westwicke; and in Queen Elizabeth’s time, A.D. 1569, we find that James Baker, Esquire, son of the above-mentioned Edward Baker, had still considerably increased his holding to the extent of some five hundred odd acres of marshland called ” Saltings.” In the time of James I.—the first of the Stewart line—A.D. 1604, it is recorded of the Appleton family, as they then spelt their surname, that they had also considerably increased their possessions in the Island, they having added to them the marshes of Autliche, Wolfpital, and Shornam. Thus, at the time of the Stewarts, the Appletons and Bakers were virtually masters of the whole Island. 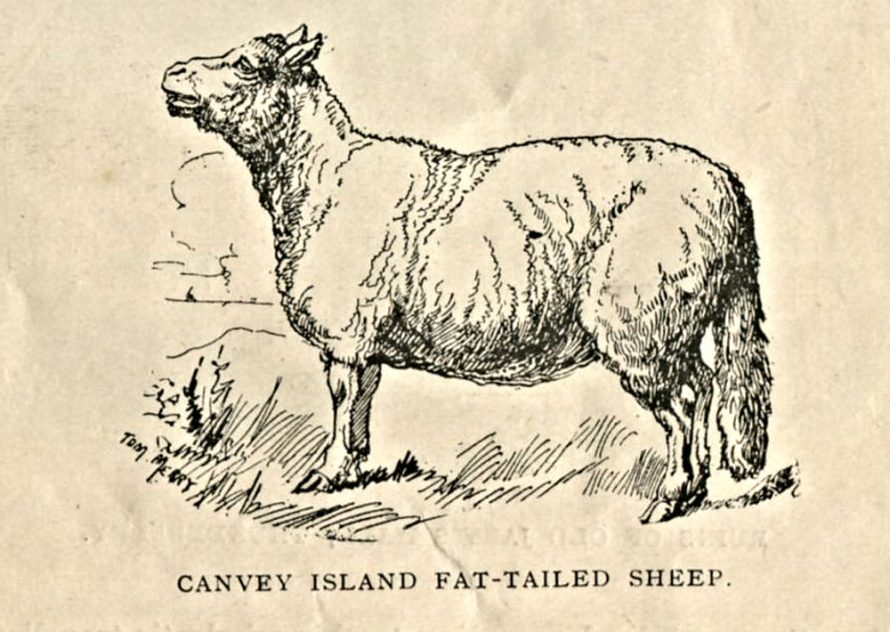 During these successive changes of monarchs the agricultural and commercial conditions of Canvey Island had been materially improved, for we discover that it had already established a considerable reputation for raising a certain breed of sheep, known as the “fat-tailed” variety. They seem to have been a fine large breed of animals, yielding flesh of a superior character and fleeces of good serviceable texture. The ewes were milked with the same regularity that cows are to-day, for the sake of the peculiarly rich milk they afforded. This milk was subsequently converted into cheese and butter which, we are told, was of a very excellent quality. The wool of this variety of sheep seems to have been exceptionally long and fine, with the result that the united industry provided by these animals was, of itself, sufficiently important to warrant the holding of an annual fair, and for this purpose the 25th of June was set apart for the festival. Independently from its commercial aspect, it is not difficult to imagine the rustic revelry that the inhabitants of Canvey Island periodically indulged in.

It is impossible to determine with any degree of accuracy, why this interesting old-world industry fell into desuetude—probably like many others from sheer inanition. The fair, however, outlived the neglected industry, for it was only abolished a few years ago, much to the regret of the surrounding neighbourhoods. That this industry was well known, both in these and later years, is clearly evident, for in his excellent work bearing on the time, ” Speculi Britannia:,” in the year 1594, when Queen Elizabeth was on the throne, the learned John Norden writes:—” Neere untoe the Thames mowth, belowe Beamflete, are certaine ilandes, called Canvey Ilandes, low merish groundes, only converted to the feedinge of Ewes—which men milk and thereof make cheese, and of the curdes of the whey they make butter once in the yeare—wch serveth the Clothier, As towching the comodeties of the sea, they are manie, among the rest it yeldeth store of excellent good fish, and giveth passage to all kinds of trafique to the great benefit of all the country.” It will, therefore, be noted that Canvey Island according to this scholastic traveller, was also an important fishing centre, and also, in a smaller degree, it possibly contributed something to the shipping and carrying trade. With regard to its sheep, milk, cheese and butter producing capacity it is freely borne out by William Camden, the historian, who visited the island some years later in A.D. 1610, when James I. was King, for he says in his great historical work ” Britannia:” when alluding to Canvey Island:—”It keepeth about foure thousand fatte-tailed sheepe of exceeding greate size, whose fleshe is most sweet and delicate to taste. I have seen younge lads taking women’s function, with stools fastened unto their buttocks to milke, yea, and to make cheeses of ewes’ milke in those dairy sheddes of theirs, that they call wickes.”

It certainly does seem to us, to-day, a regrettable circumstance that such an interesting, primative, yet rural industry should have been allowed to sink into oblivion; for Canvey Island undoubtedly possesses in its pasturage, climate and other agricultural surroundings, all the natural constituents for sheep raising purposes, to say nothing about the loss sustained in providing us with such toothsome dainties as ewes’ milk, cheese and butter, which produce in Continental countries, is regarded by the gourmet as both delicate, nutritious and appetising. Possibly some enterprising reader may yet be induced to see his way clearly, to rehabilitate this lost and neglected Island industry, as there is absolutely no reason why the resuscitation of such dainty produce, in this luxurious age, should not yield an ample margin of profit. 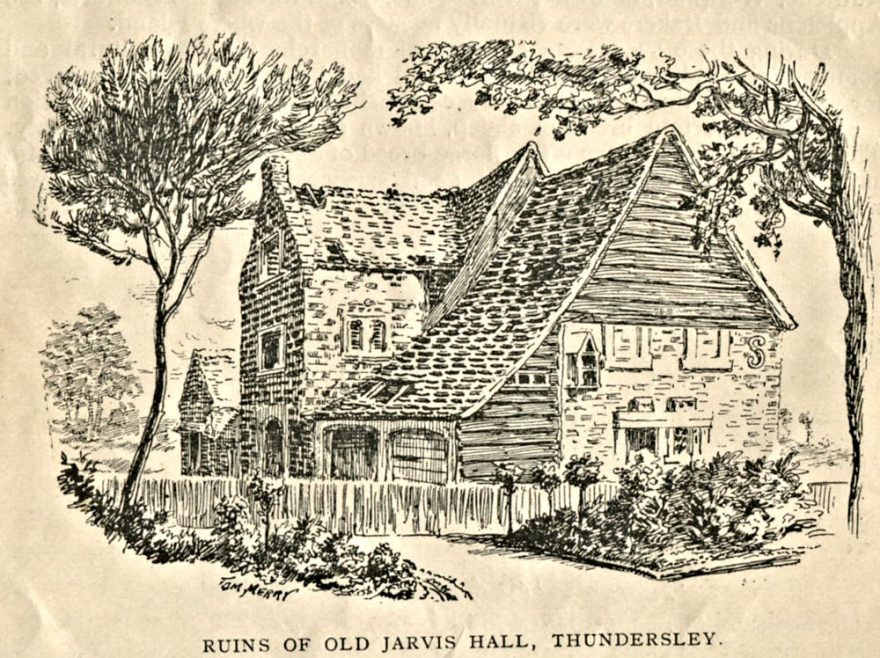 Passing on with our narrative, we find that in 1557, in the reign of Queen Mary I., Sir Roger Appleton of Jarvis Hall, Thundersley, held Canvey Island in fee simple, and also that it remained in the hands of this notable family until the time of James I., when it was in possession of Sir Roger Appleton’s great-grandson, Sir Henry Appleton in 1604. The tombs of the Appleton family, in an excellent state of preservation, are to be seen in the chancel of the Church of St. Mary the Virgin, South Benfleet.

In this reign Canvey Island, under the auspices of Sir Henry Appleton, was destined to see great changes effected for the permanent betterment of the Island. From the time of the disastrous flood mentioned in the preceeding chapter, very little, if anything, seems to have been done in the way of attempting to reclaim the then submerged portion of the Island; and an accidental yet interesting circumstance, which we shall subsequently relate, occurred, whereby Canvey Island was rescued from the incursion of the sea, and permanently restored to its original proportions.