Why the Danes came to Canvey Island.—Local tradition.— King Conubelin’s Gold Mines.—”Old King Coel.”—Defeat of King Ethelred the Saxon by the Danes under Sweyn.— His son, Canute the Dane, proclaimed King of England.

At this remote period of our country’s history, owing to a want of continuity of ancient record, it is extremely difficult to discover, with any degree of accuracy, the predominating motive which inspired the Vikings to take possession of Canvey Island, and thus invade the country generally. Whether they were originally bent on permanent conquest, or periodical plunder, is also equally difficult to determine. Local tradition, however, would point to the latter alternative, although afterwards it eventuated in the former one. If plunder was originally meant—and this seems to be borne out in the Saxon chronicles compiled by Plegmund, Archbishop of Canterbury, from the registers kept in the monasteries, of passing events from Alfred’s time, A.D. 871, to that of Stephen, A.D. 1154—the astute Vikings or creeksmen, certainly chose an unique position to effect their nefarious designs. Canvey Island itself would afford them a safe camping ground, whilst Canvey Creek would be admirably adapted, as a navigable harbour, for the disposition of their fleet.

From hence, periodically, they could land at Benfleet, with the utmost ease, armed hordes of these adventurous and unscrupulous raiders, and thus scour the country generally.   And who was to say them nay?

The ancient Briton had no fleet, whilst the hardy Norseman was, at that time, practically master of the sea. If, on land, they met with a repulse or temporary defeat, they could take to their boats and summon to their aid the reinforcements that were continually arriving on the south side of the Island, and return with redoubled force and vigour to the onslaught of their objective. If plunder were their immediate object, the idea, accord­ing to local tradition, seems to have originated in the fact that the County of Essex was reputed to be rich in mineral wealth ; and that, round its coast, more especially that portion immediately abutting the Thames, or the Tamis as it was then called, from Tilbury to Shoeburyness, an abundance of gold and silver was to be found. This, therefore, has been supposed by some to have been the initial attraction of the Danish invaders. How far this theory is true we cannot vouch; but there remains the fact that we have numerous references to the existence of King Conubelin’s gold mines in this vicinity, in ancient records and subsequent histories.

It may possibly gratify the reader’s curiosity to learn who this mysterious potentate really was. 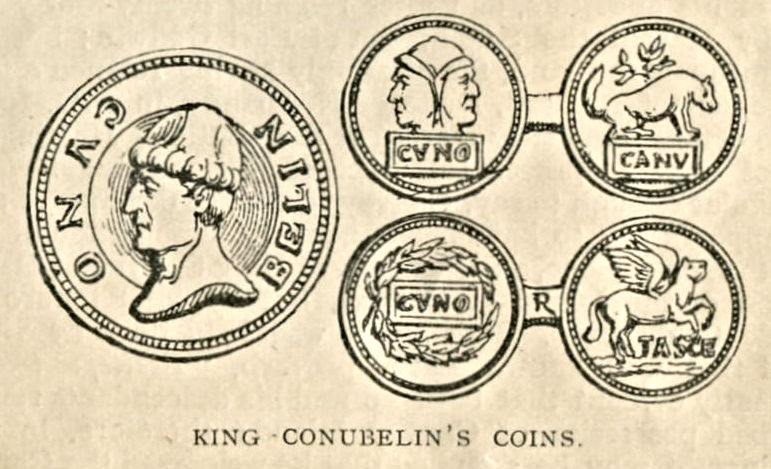 Briefly, Conubelin was the King of the Trinobantes, an ancient British tribe, who took the liberty of dwelling in that part of England now known to us as the Counties of Essex and Middlesex. How this nomenclature obtained is not at all clear; but, suffice it to say that, Julius Cæsar called them Trinobantes, whilst Ptolemy and Tacitus speak of hem as the Trioantes. King Conubelin was reigning at that period when Tiberius was the Roman Emperor. He was a descendant of King Coel—of ” merry old soul ” renown—the reputed founder of Colchester, and whose daughter Helena, subsequently became the mother of Constantine the Great.

Some remains of these alleged Conubelin gold mines are yet to be seen between Benfleet and Tilbury, now called “Dene Holes” or “Danes Holes,” and vary from sixty to seventy feet in depth. They were evidently in a good state of preservation in 1610, inasmuch as Camden, who personally inspected them, not only makes mention of them in his Britannia;, but also furnishes us with the quaint illustration we have taken the liberty to reproduce on the opposite page. Camden’s description of them is almost as quaint as the illustration. He says: ” Neer untoe Tilbury, there be certaine holes in the rising of the chalkey hills sunke intoe the ground tenne fathom deepe, the mouth wherof is but narrow, made of stone cunningly wrought, but within they are large and spacious. Tradition hath it that they be some of King Conubelin’s golde mines.”

In spite of the severe defeats inflicted on the Danes by Alfred the Great, and a century later by King Ethelred, neither of the Saxon monarchs apparently succeeded in the task of thoroughly extirpating them. Yes, they bad evidently, “come to stay.” Their repeated returns to Essex were insistent; and, with the gradual efflux of time—” the great healer”—and other fortuitous circumstances in their favour, the undaunted Norsemen found their way back to Benfleet-cum-Canvey in great numbers, and seem to have possessed themselves of considerable property in the adjoining neighbourhood of Thundersley, Hadleigh, Raleigh, Eastwood, and Leigh, as we shall show in succeeding chapters. In fact, so powerful did the influence of the Danes become all over the country, that they finally succeeded in dispossessing the Saxon line of monarchs by placing Canute, the son of King Sweyn of Denmark on the British throne, A.D. 1017. Writing at this transition stage, after the defeat of Ethelred by Sweyn, Polydore Vergil, in his history of the time, quaintly puts the position thus:—”Soe that nowe Etheldredus, thincking it highe time to geeve room to his enemie, after XXXV yeares of his reigne, fled unto Richard Duke of Normandie, and Sweno consequentlie obteyned the whole dominion over England. Thus the Danes were the nex straungers which gatte a kingdom in the Ilonde, which was MXVII yeare of our Salvation.”