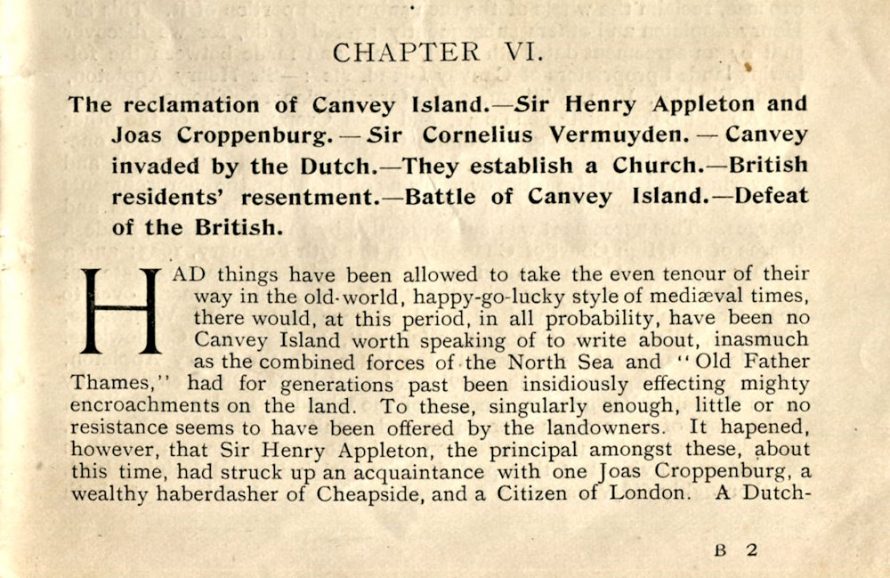 Had things have been allowed to take the even tenour of their way in the old-world, happy-go-lucky style of mediaeval times, there would, at this period, in all probability, have been no Canvey Island worth speaking of to write about, inasmuch as the combined forces of the North Sea and ”Old Father Thames,” had for generations past been insidiously effecting mighty encroachments on the land. To these, singularly enough, little or no resistance seems to have been offered by the landowners. It hapened, however, that Sir Henry Appleton, the principal amongst these, about this time, had struck up an acquaintance with one Joas Croppenburg, a wealthy haberdasher of Cheapside, and a Citizen of London. A Dutchman by birth, he had by business aptitude, accumulated enormous wealth ; and, on an occasion of his visiting Canvey Island with Sir Henry Appleton, the worthy Dutchman pointed out to Sir Henry the advisability of taking immediate steps to repel these two powerful invaders, and thus rescue the Island from an eventual watery grave. The reclamation of land, as is well known, has by Dutchmen been reduced to a fine art; and doubtless, Sir Henry Appleton lent a favourable ear to the astute haberdasher’s sug­gestions. The best part of Holland, to-day, affords us ample evidence of the Dutchmen’s power of acquisition of land from the maws of the sea. On the occasion of his visit to Amsterdam, Erasmus once said:—” I know now, where a people, like the rooks, dwell upon the tree-tops,” and verily such is the fact. Reclaimed from the Zuider Zee, by the continuous labour of driving millions and millions of stalwart wooden piles, the hand­some and wealthy City of Amsterdam now rears its lofty head, proud in the fact that it is a substantial and enduring monument of foresight, industry, and energy, which combination wrestled with, and subsequently gained a great victory over a great natural element and all its forcible concomitants. Yes, at the beginning of the thirteenth century Amsterdam was only a remote fishing village, subject to frequent inundations, in pos­session of the Lords of Amstel; but to-day it is one of the chief com­mercial cities of Europe, and the Capital of the Kingdom of the Nether­lands—and all this owing to the art of reclamation. The suggestion of the reclamation of Canvey Island, by the like methods employed in rescuing Amsterdam, was made by Joas Croppenburg to Sir Henry Appleton; but, for a time apparently Sir Henry could not see his way clearly to embark on such a prodigious undertaking single-handed. But the commercial-minded Dutchman, recognising the intrinsic value of the Island, and with a view to future business, proposed that if he—Sir Henry Appleton—and other landed proprietors would combine, and grant him a one-third of the acreage of the Island, he would at his own cost and expense, reclaim the whole of the then submerged portion of it. This Sir Henry Appleton and others subsequently agreed to do, for we discover that by an agreement dated 9th April, 1622, and made between the fol­lowing landed proprietors of Canvey Island, viz. :—Sir Henry Appleton, Julius Bludder, John, William, and Mary Blackmore, Thomas Binckes and Abigail Baker, of the one part, and Joas Croppenburg of the other part, the said landowners granted unto Croppenburg, in fee simple, one-third of their lands, in consideration of his sufficiently “inning” and recovering the Island from the overflowing of the tides, the encroachments of the sea, and maintaining an effective sea wall at his own costs and charges. This agreement was subsequently, by mutual consent, made a decree of the High Court of Chancery on the 27th February, 1623; and a further agreement was entered upon and registered, bearing date 1st December in the same year, whereby Sir Henry Appleton made over to Joas Croppenburg one-third of his lands, which included Westwicke, Shonares, Westatenes, Chaffleet, Wellispitt, Darlette and Castlewicke. In order to carry out his contract to the letter with Sir Henry Appleton, Joas Croppenburg engaged the services of a celebrated Dutch engineer, by name Cornelius Vermuyden, a native of the Island of Tholan, in Holland, and a pupil of the renowned engineer and architect Jacob Van Kamper, who did much to beautify Amsterdam, and who possibly knew more than any other individual of that period about reclaiming and draining land. So thoroughly did Vermuyden accomplish his task of reclamation, both here and in other adjacent reaches of the Thames at Leigh, Hadleigh, and Dagenham, that King Charles I., recognising his skill and ability in this respect, conferred the honour of Knighthood upon him at Whitehall, on the 6th January, 1628, hence, through his connection with Canvey Island, he became Sir Cornelius Vermuyden.

It seems not a little strange that no approximate mention of this great engineer’s services to Canvey Island has ever been made. Neither has he been recognised by old Essex chroniclers, such as Morant, Salmon, Wright, nor even by modern local guide books. They, one and all, fall into the same error in asserting that Croppenburg, the City haberdasher, was the reclaimer of the Island, whereas, in reality he was only the financier for a valuable consideration, of a practical scheme suggested, and actually carried out by Sir Cornelius Vermuyden, the celebrated Dutch engineer, whose native place had from early youth, afforded him excep­tional facilities for studying the principles and practice of reclaiming and embanking. We do not for a moment wish to detract from the original part played by Jaos Croppenburg, in exhibiting his perspicacity—neither do we say it in any carping spirit—but let us “render honour to whom honour is due.” We learn, however, if somewhat belated, that the name of Sir Cornelius Vermuyden is yet to be perpetuated on the Island by Mr. Frederick Hester, one of the principal landowners there. This gentleman is now erecting for the benefit of the public generally, a Winter Garden, which, when completed, will be an elegant glass structure, planted with choice fruit trees, flowering shrubs, and climbers, intersecting the whole Island, six miles in length, certainly the longest and most unique of any­thing of the kind in the United Kingdom, and which, we are credibly informed, will in the due process of time be called “The Vermuyden Winter Gardens.” 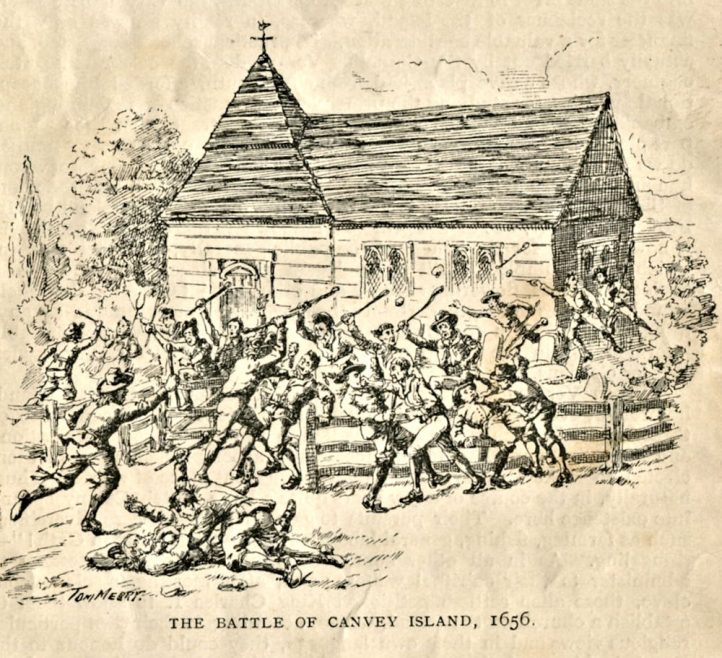 When Vermuyden undertook the task of reclaiming Canvey Island, he brought over with him from Holland an efficient staff of some two or three hundred Dutchmen, all well skilled in the art of land reclamation; and after the work had been successfully accomplished, most of them elected to make Canvey Island their permanent place of abode. Thus, naturally, in the course of a few years quite a large Dutch Colony sprung into existence here. Their pursuits to gain a livelihood were diversified, such as farming, fishing, general labouring, and—”tell it not in Gath! “— smuggling. As in all other communities, it was found necessary to administer to their spiritual welfare; and, after meeting in solemn con­clave, these alien settlers petitioned King Charles I. to allow them to establish a church on the Island, where, according to their own particular religious views and in their own language, they could do honour to the Great Architect of the universe. This petition appears to have been graciously granted by King Charles; and the Dutch community having built a wooden church, elected Dom Cornelius Jacobson as their first pastor. The introduction of the Dutch church, the Dutch religion, and its conduct in the Dutch tongue, seems to have somewhat perturbed the primitive British dwellers on the Island. Their Parish Church was, at that time St. Mary the Virgin, South Benfleet, some two miles off, and to many of them, much more than that in distance; and in order to save this long journey in all weathers they, in their turn, petitioned the Dutch community for the occasional use of their church, whereby the service could be rendered in English. This the Dutch peremptorily declined to acquiesce in, with the result that British indignation and resentment was aroused, and anarchy between the two factions became so rife that on Whit-Monday, 1656, it culminated in a general riot and a free fight for the possession of the church. For it appears that the British provided them­selves with a minister of their own choosing, formed themselves into a body, marched to the Dutch church, and demanded the keys. The Dutch had evidently anticipated the British design, for they also were assembled in strength and prepared to withstand—by force if necessary—and thus resent what they regarded as an invasion of their legitimate rights. A free hand-to-hand fight ultimately ensued between the opposing factions for the possession of the keys, which, however, were successfully withheld by the Dutch, and the disconcerted British were eventually defeated and routed—” How these Christians love each other!”