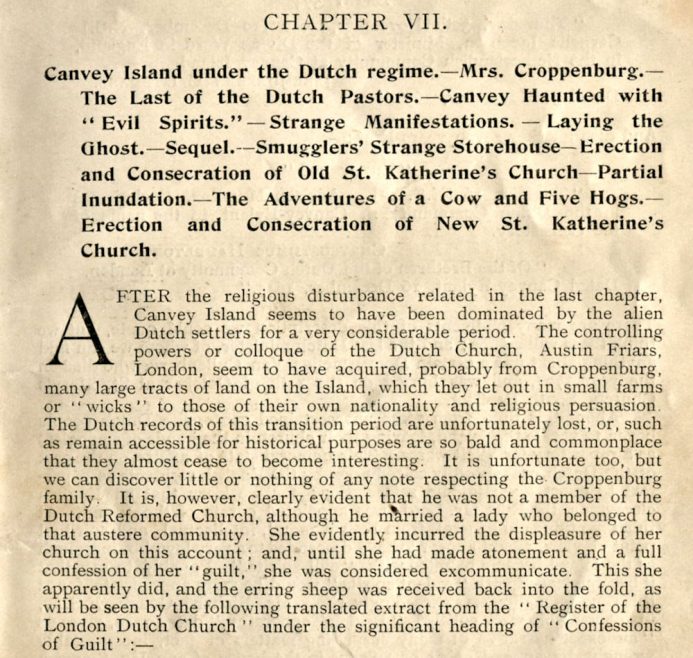 After the religious disturbance related in the last chapter, Canvey Island seems to have been dominated by the alien Dutch settlers for a very considerable period. The controlling powers or colloque of the Dutch Church, Austin Friars. London, seem to have acquired, probably from Croppenburg, many large tracts of land on the Island, which they let out in small farms or “wicks” to those of their own nationality and religious persuasion. The Dutch records of this transition period are unfortunately lost, or, such as remain accessible for historical purposes are so bald and commonplace that they almost cease to become interesting. It is unfortunate too, but we can discover little or nothing of any note respecting the Croppenburg family. It is, however, clearly evident that he was not a member of the Dutch Reformed Church, although he married a lady who belonged to that austere community. She evidently incurred the displeasure of her church on this account; and, until she had made atonement and a full confession of her “guilt,” she was considered excommunicate. This she apparently did, and the erring sheep was received back into the fold, as will be seen by the following translated extract from the ”Register of the London Dutch Church ” under the significant heading of “Confessions of Guilt”:—

“A.D. 1585. . . . Lievine, the wife of Joas Croppenburg, whom she married two years ago, against the ordinance of our church, without the banns having been published.”

The religious offence of this lady, if such it can be considered, was evidently absolved by the church, for in a later entry, under the head of ” Baptisms,’ we find that a son of this worthy couple was duly baptised according to the Lutheran rites.

How, for many years, the Dutch people fared in a spiritual sense is equally uncertain. It is clear, however, that the religious ministrations of Canvey Island were, to say the least, only occasional and intermittent.

From the same authority, above quoted, we cull under the heading of “Attestations,” the official appointment of another Dutch minister:—

And also another seven years later :—

“Tuesday, 16 [N.S. 12]. Adriaen Munninx, Ecclesiastes in the Dutch Community in Canvey-Eylant, in the name of the Consistory.

Chrysostijmus Hamelton. ” Of the Brethren of the Dutch Community at London. Dated Canvey Eylant, 16 December. 1645.”

There are many oddments of this description we could quote, but we think these will suffice; and the last Dutch minister, of whom we can find anything about was a certain Dom Emelius Van Cullenborg, who died in the year 1704, and was buried on the 14th of October at St. Mary’s Church, South Benfleet. 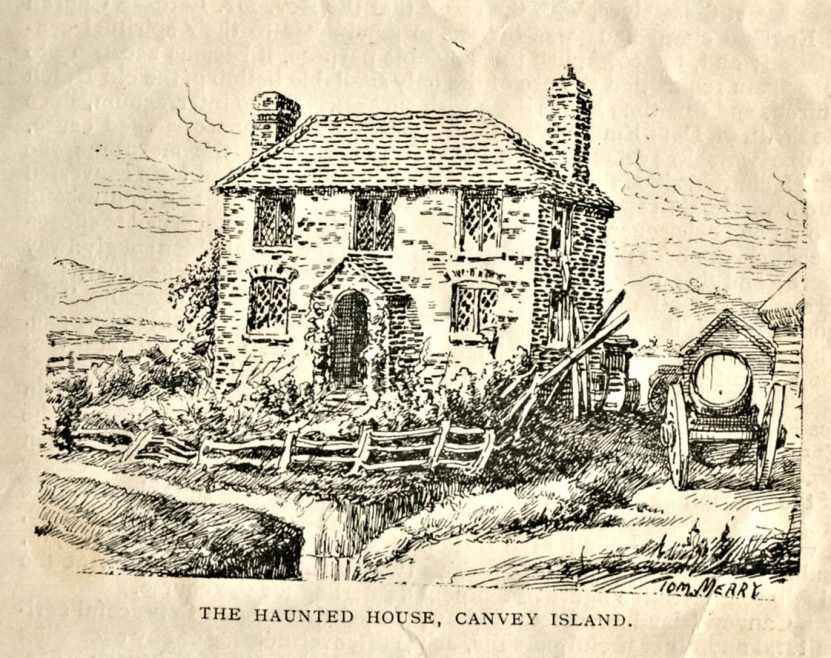 About this time from some unascertained cause, the Dutch people began to vacate the Island, leaving their church in the hands of smugglers as a repository for illicit wares. This immoral state of affairs, on the part of the Dutch, was speedily seized upon by the English residents as a pre­text to effect a wholesome reformation; for we learn that an English clergyman, the Rev. Mr. Lord, was appointed curate of the Island. At this time things in general, from both a moral, intellectual, and spiritual point of view, would appear to have descended to a very low ebb, inasmuch as the Island became haunted with “evil spirits.” Possibly to say that it became loaded with “ardent spirits ” would be more appropriate, for at this time smuggling was exceedingly rife. Mr. Richard Gough, F.S.A., in his valuable work entitled, ” British Topograthy,” dated 1780, gives us “an exact narrative of many surprising matters of fact, incontestably wrought by an evil spirit or spirits, in the house of one Jan Smagge, farmer, in Canvey Island, near Leigh, Essex, upon the 10th, 13th, 14th and 16th of September, 1709, in the day time, in the presence of the Rev. Mr. Lord, curate of the said Island, Jan Smagge, the master of the house, and several neighbours and servants, and many strangers whose curiosity had led them to this place of wonders.” The Rev. Mr. Lord, mentioned in this quotation, also vouches for “the extraordinary things credibly said to have disturbed the house, both before and since Mr. Smagge came into the house. The utmost caution being used not to exceed the truth in the minntest circumstances.”

Historical records tell us, that this said Jan Smagge rented “thirty acres of land lately in the occupation of Peter Van Bell, in the South part of Holyhead, alias Canvey Island,” at eight pounds per annum; and tradition also asserts that strange sepulchral noises, accompanied by sulphurous fumes, disturbed the household both by day and by night. This alarming state of affairs seems to have culminated on the dates given in September, 1709, in the presence of the Rev. Mr. Lord, when to the consternation of all present groans and screams were heard, the house shook violently, windows involuntarily cracked themselves, and sober articles of domestic furniture played grotesque antics to the amazement, fear, and trembling of all beholders. Like all reputed haunted houses, which have, in by-gone days, sheltered evil spirits, things eventually resumed their normal condition; for to-day this incredible circumstance, however respectably vouched for, is almost forgotten on Canvey Island, the house, however, still exists, and we give a picture of it as it stands to-day.

Probably, according to the superstitious custom prevailing in those benighted days, the Rev. Mr. Lord was called in to a function well known at the time of ” laying the ghost “—Requiscat in peace.

But there is another side to this alleged ghost story, however, and one probably unthought of by the good, but perhaps too confiding curate, the Rev. Mr Lord. The Dutchmen of Canvey Island were not such simple-minded folk as their stolid features pourtrayed. This is, in all probability, a feature which the Rev. Mr. Lord overlooked in his con­scientious endeavour for the pacification of those disquieting elements, ” the evil spirits.” Be that as it may, however, whilst the Rev. Mr. Lord, the wily Jan Smagge, the servants, and the strangers within those ancanny gates, ” whose curiosity had led them to this place of wonders,” were en­gaged in witnessing these wonderful alleged supernatural manifestations, it possibly, did not occur to the reverend gentlemen, that other astute Dutchmen were also, at that psychological moment, assiduously engaged in removing, not only “evil spirits,” but other contraband produce from the little place of worship he had been called upon to do duty in, in pursuance of his holy calling! Yes, these simple-minded Dutchmen knew something after all; for while the parson was “praying” in the house of Smagge, other astute Dutchmen were not only “watching,” but working in the church. The origin of the existence of “evil spirits” in Canvey Island is alas! contained in the sequel, which it will be as well to relate to put all doubts at rest. Since the death of Dom Emilius van Cullenborg, the Dutch religion had, vulgarly speaking, “gone to the dogs”; and the English residents being aroused to a sense of duty, once more determined to re-assert themselves, with the result that the Rev. Mr. Lord—a Church of England clergyman—was invited to administer to their spiritual con­solation; and, to accomplish this laudable purpose, it became necessary to once again requisition the use of the only available building, the old Dutch church, and this time it was done with success. In the interregnum, since the death of Dom Emilius van Cullenborg, for some unascertained cause, Divine worship seems to have been suspended. In the meantime the Dutch church, since the cessation of religious services, had been converted into a wholesale repository for the storage of smuggled and contraband goods; and consequently it became imperative for those concerned to effect a speedy clearance of the illicit revenue-defrauding produce hidden snugly away there; and this very necessary operation was being very effectively per­formed whilst all disinterested persons were assembled witnessing ” the wonderful manifestations” we have described, at the instance of Jan Smagge. The process of removal completed, it is almost unnecessary to add that the ” manifestations” subsided, and the “evil spirits ” disappeared. 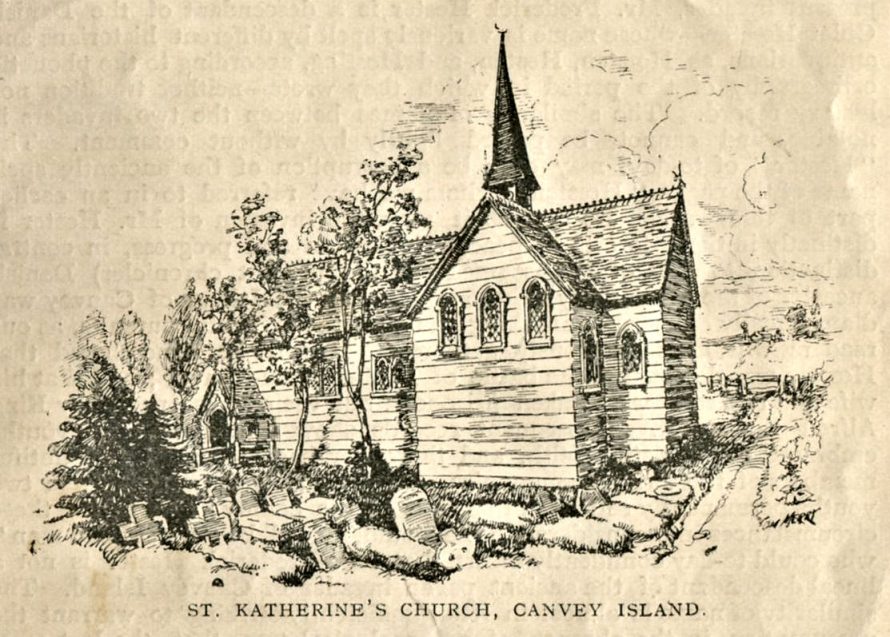 The tumble-down, desecrated, barn-like structure, which had been used as a church by the Dutch, did not last long in the hands of the English; for, thanks to the generosity of a certain Mr. Edgar, the then owner of Chaffleets Farm, Canvey Island, who is described as an officer of the Victualling Office, it was pulled down and a more suitable structure erected to accommodate about eighty people. Dedicated to St. Katherine, it was duly consecrated by the Bishop of London on the 11th June, 1712, and a curate was appointed to preach twenty sermons per annum, at the highly remunerative figure of ten pounds sterling for the course.

Canvey Island now seems to have settled down again to peaceful agri­cultural and other useful pursuits, as we discover nothing of any exceeding moment until the reign of George II., when on the 16th of February, 1735, owing to an abnormally high tide and a remarkably heavy gale, a portion of the sea-wall collapsed under the extraordinary pressure of the combined elements, with the unfortunate result that partial inundation ensued; and although no lives were lost, the Rev. Philip Morant says, “one half the cattle and sheep were drowned,” and relates in his history the following remarkable escapade of a cow and five hogs:—”A cow and five hogs, then happening to stand on a dung hill, were swept by the on-rushing water nearly a mile over a deep creek, and luckily preserved from being driven with the rapidity of the stream by the dung hill being stopped by a high, bank.” This is the last serious flooding the Island was subjected to. The temporary break made in the wall was speedily repaired and strengthened; and it is satisfactory to know that one-third of the rental value of the Island has ever since been applied annually to the further strengthening of the sea-wall, so as to put the chances of a recurrence of a similar disaster at any future time out of the question. The sea-wall to-day is practically invulnerable.

In 1745 St. Katherine’s Church was restored and enlarged at the expense of Mr. Daniel Scratton, a large and respected landowner then residing at Prittlewell, and this edifice apparently had to do duty until 1875. The next one hundred and fifty years in the history of Canvey Island would appear almost like a blank, but for the fact that land changed hands many times, and that the Dutch have long since surrendered it to a peaceable body of thrifty English farmers, who, considering the long period of agricultural depression they have had to contend with, are one and all healthy, contented, and fairly prosperous. Old St. Katherine’s Church, which was built in the time of George II., began to get somewhat dilapidated in the reign of our late beloved Queen Victoria; and thanks to the untiring energy and perseverance of the late vicar, the Rev. Mr. Hayes, sufficient funds were raised to warrant the demolition of the old structure, and the rebuilding of one in its place capable of seating no less than two hundred people. The only portion of the more ancient edifice of 1712 utilised in the reconstruction of the present church, are some windows and the old porch. It is a pretty little structure of wood— thoroughly in keeping with its rustic village surroundings—standing in the churchyard on the London road, consisting of nave, chancel, transepts, and Lady chapel, together with a spire, belfry, and a first-rate organ. It was consecrated on the 9th of November—our present King’s birthday—1875 by the Bishop of Rochester. The present vicar is the Rev. Walter Hagger, and the living is the gift of the Bishop of St. Alban’s, and is now worth £230 per annum.