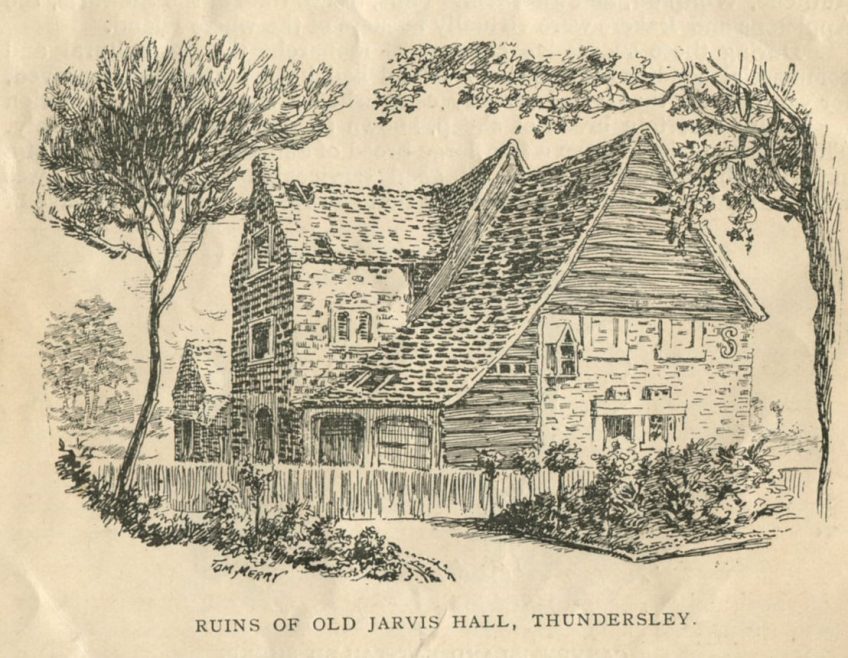 Having laddened the eyes and refreshed the senses with such an enchanting scene as described in the last chapter, we descend the hill, take the first turning to the right, past the “Anchor Inn,” and keeping the raised pathway, under the churchyard wall, we arrive at the fingerpost at a forked road, the left running to Thundersley and the right to Hadleigh. Passing the Works of the Benfleet Electric Light Company, Limited, we proceed to Thundersleigh, a very interesting old village which is sandwiched between North and South Benfleet, some two and a half miles from Canvey Island. Our old friend Suene and his succeeding heirs loomed largely here, and were for many generations lords of the Manor, until Henry II. deposed Henry de Essex and confiscated his proud domains. Thundersleigh was also, in after years, the manorial seat of the Appleton family. The remains of their ancestral home, Jarvis Hall, are still to be seen; and considering its antiquity and the fund of historical interest attaching it, they are some­what disappointing. 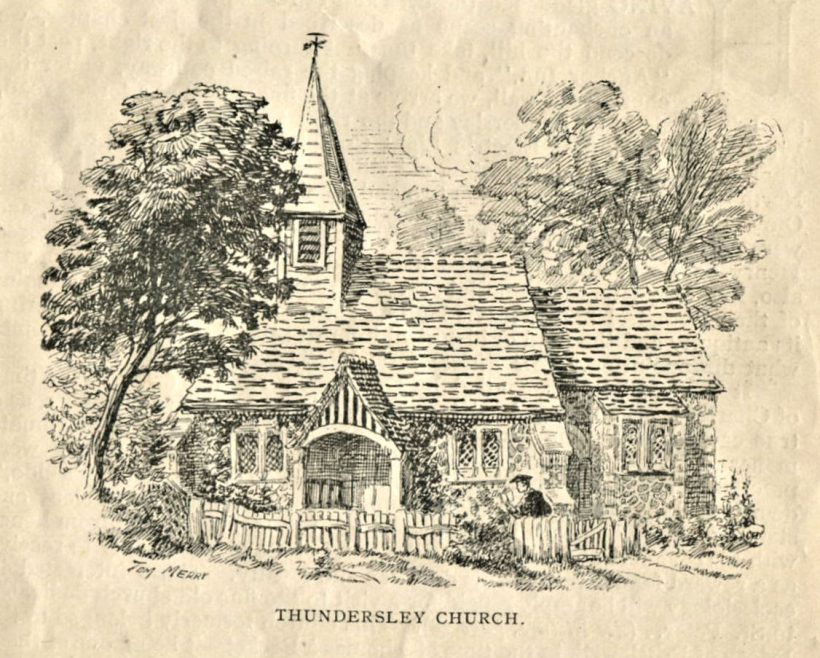 It was partially dismantled by Cromwell’s ruthless army in the time of Charles I. Sir Henry Appleton the then lord of the Manor having, as a true cavalier, taken up arms in defence of the cause of that unfortunate monarch. With the lost cause of the King the Appleton family were practically ruined; the old house, “once the pride of that country’s side,” demolished by Iretons fanatical roundheads, and thus an ancient and stately mansion has been lost to posterity. Sir Henry set out from hence with his cavaliers and retainers to the relief of Colchester—only to receive as a reward family ruin for his devotion and loyalty. Those interested in ecclesiology will be amply repaid for a visit to the fine old church dedicated to St. Peter. This church formerly belonged to the Priory of Prittlewell, in the time of Thomas a Becket—it being one of those the martyred Archbishop had under his special protection. There are many very old grave stones in the chancel, but alas! they are all too defaced to decipher now. The Rev. Talfourd Major is the present Rector of Thundersley. The village of Thundersley seems to be enveloped in an atmosphere of bye-gone years, and it hovers about amid its rural surroundings until we wonder if it will ever again throw off its somni­ferous air of repose. We are here in a hilly, listless, country commanding extensive views of a variety of interesting scenery including the sunny slopes of Pitsea and the loftier tops of the Laindon Hills; but turn which way we may, we cannot lose sight of Canvey Island.

Retracing our steps to the finger post, we turn to the right, and passing Elizabethan-looking Vicarage, nestling under the tree-clad hills, we make a sharp ascent strait up the road. We take things easily now, for if ever we doubted the existance of hills in Essex before, the delusion is ocularly dispelled for ever; and, although the elevation is gradual, the road is tortuous and persistent. We do not stay until we have attained the summit, at an altitude of over three hundred feet above the sea-level. This minature Alpine experience accomplished, we congratulate ourselves on having tramped to a height equivalent to that of the dome of St. Pauls. The sun is shining radiantly, and inparts a genial warmth to the exhilarating and rarefied atmosphere. The early spring garniture of the hedge-rows and wood and pasture lands is gratifying to the eye. From this coign of vantage we not only get a clearly denned back view of Canvey Island, but we are enabled to get an extensive panoramic view all over the Island, with the towering Kentish Hills silhouetted against the sky-line on the southern slopes of the River Thames. We journey on for rather less than a mile, and we arrive at the time honoured ruins of Hadleigh Castle which Constable, the artist, has depicted so graphically. 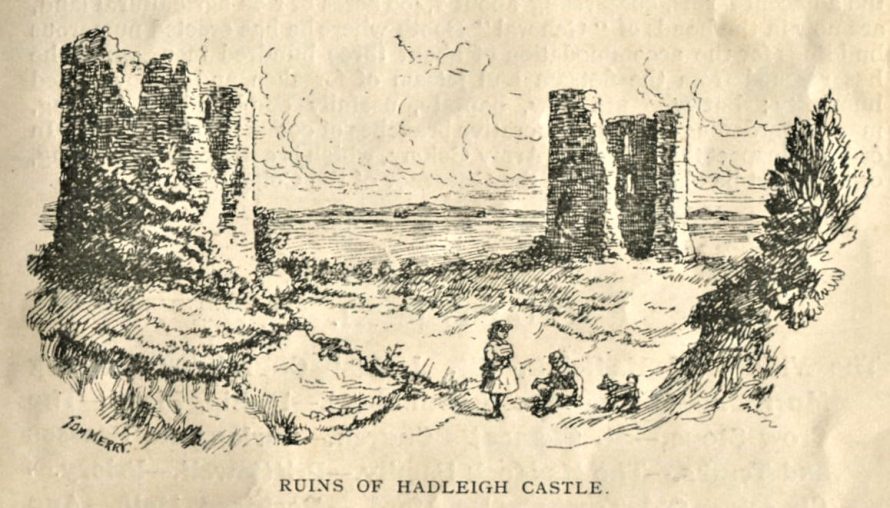 The vicissitudes of this old fortress have, needless to say, been many. This venerable baronial establishment was built by Hubert de Burg, Earl of Kent, A.D. 1231, who, during the time of Henry III., acted conjointly with Peter de Roches, Bishop of Winchester, as Regent during the King’s minority. These two important functionaries did not entirely agree on a question of State policy; and we are told that Pandulp, the Pope’s legate, “had some considerable difficulty in preventing an open quarrel,” Henry III. was eventually crowned at the early age of seventeen at the instance of Hubert de Burg; and from this circumstance, became the King’s chief favourite. Amongst other valuable possessions the young King bestowed on him, was the land upon which he subsequently built Hadleigh Castle. The land previously had been a portion of Suenes, confiscated estate. It is traditionally asserted that Suene had a Castle hereabouts, long before the Conquest, therefore, that built by Hubert de Burg, was probably only a restoration or an enlargement of the former and older one. The following, however, is a translation from the Patent Roll of King Henry III., A.D. 1231 “The King to whom these present letters shall come Greeting. Know ye that we have granted for us and our heirs to Hubert de Burg, Earl of Kent, our Justiciary of England, and to Margaret his wife, a certain Castle at Hadleigh.” Therefore it is plain that a structure of some considerable importance must have existed here prior to the execution of the above warrant; the more especially so, as it is alluded to in Doomsday Book, in the time of William the Conqueror, as ” Hadleigh ad Castrtim.” But, whatever may have been primarily built here, the Castle must have been in a pretty considerable state of dilapidation in the time of Edward III., for we find in the year AD. 1359. that timber was sold in the parks of Thundersley and Raleigh to provide funds to partially rebuild it. For the purpose of this renovation the King appointed John de Tyneside, “to repaire certayne houses in his Castle of Haddleye, taking for his wages Xll pence per daye ” The King and Queen seem to have made this their royal residence, and to have spent much of their time here, for other curious accounts show that much of this money was expended on “the King and Queen’s Chambers.” Henry VI. granted this Castle and Manor, together with a “weekly market,” to his brother Edmund. Henry VIII. granted the Castle. Manor, &c, to his fourth and forsaken wife, Anne of Cleves, whom the “bluff King Hal” was wont to euphemistically characterise as “a great Flanders Mare!” Having successfully contrived to obtain a divorce against Anne, within six months of his marriage, the King, A.D. 1540, made this munificent grant in her favour, together with an annual pension of £3,000, for her maintenance, both of which she enjoyed to the day of her death—which happily for this maligned and unfortunate lady, was a natural one. Edward VI., the son and successor of King Henry VIII., granted A.D. 1551, the Castle, Manor, and Market to Richard, Lord Riche, from whom they passed to his descendants the Earls of Warwick. The Castle was finally dismantled as the hands of Cromwell; and all that now stands of the historic structure is represented in our picture. The remains are situated on the acclivity of a steep wooded hill, commanding fine views over Canvey Island, the Thames Estuary, and the North Sea. Very little of the ancient Castle remains to-day, excepting two circular ivy-clad towers, which still exhibit some traces of its former ancient grandeur. The walls on the north side are strengthened with buttresses. The cement between the stones, deserves inspection, and seems to be largely composed of sea-shells and cement, which has undergone a process of natural vitrification, and which to-day is as firm and as hard as the stones themselves. The Castle and the adjacent farms, comprising about 1,400 acres of rich agricultural land, are now in the hands of “General” Booth where he has erected numerous buildings for the accommodation of about three hundred men, whom he has rescued from the flotsam and jetsam of forsaken and impoverished humanity; but who are now, happily, usefully employed in farming, market-gardening and other lucrative branches of commercial industry. In order to inspect the Salvation Army Colony, which is extremely interesting, orders must be obtained from the Governor of the Colony.