In later copies this man was said to be Joseph Hills which is probably correct. He lived to the ripe old age of 93.

Having taken this somewhat wide detour for the purpose of inspecting the rural environments of Canvey-on-Sea, we return and inspect the Island itself as the present chronicler finds it actually to-day. Such a record will undoubtedly find some considerable interest amongst future generations of “Canveyites.” We have seen the Canvey Island of the past, let us see what it is to-day and enquire what its future prospects are. Although the Dutch people have long since quitted Canvey Island, and returned to the land of their origin, it matters not which way one turns, one sees in all around Dutch remains written very largely. In fact with its dykes, walls, and buildings dating from the time of King James the I., and an occasional heron standing gravely on the banks amongst the reeds, silently watching for its prey, it only requires but a very slight stretch of imagination to fancy oneself on the shores of the Zuider Zee. Although as much as possible of its originality will be retained, yet, on every hand there pervades a grateful sense of development and improvement steadily and persistently going on, which plainly tells us that the whole phase of its existence will be entirely changed in the course of a very few years; and also that those fleeting years will speedily convert it into one of the most fascinating little health and pleasure resorts in the kingdom. Certain it is that the hitherto obscure and almost forgotten little Island on the South Eastern Coast of Essex, is destined to witness a grand and immediate transformation, a trans­formation more rapid, and more vigorous than that which elevated Southend from the obscurity of a mere common-place fishing village, with a small handful of people, to the importance and dignity of a Corporate Borough with a population of 29,000 to-day. Had this rapid transition have been predicted for Southend some thirty-five years ago, the prophet would have been laughed to scorn. But, giving a guiding spirit, an organiser, and an astute administrator, we travel even more rapidly to-day; and Canvey-on-Sea is indeed particularly fortunate in this respect, for the day of its development has arrived, and with its arrival it has discovered the required guiding spirit. There are many material and natural reasons why Canvey-on-Sea must advance. More fortunate in these respects than its neighbour on the mainland, Southend, Canvey Island has a long stretch of a beautifully firm shell and sand beach, unaccompanied with that terrible item of black mud which so sorely disfigures the foreshore of Southend, and which at low-tide pre­sents a dreary waste of unadulterated black soft mud—a veritable slough of despond. Considering its proximity to Southend and the mouth of the River Thames, the picturesque foreshore of Canvey Island is simply wonderful; and in the near future it will doubtless be a children’s perfect paradise, inasmuch as both spade and bucket—so dear to the juvenile heart—can be requestioned with impunity to extemporise myriads of fairy­like, but yet, alas! fragile castles, whilst possibly their elders, fondly watching these childish endeavours, will be fashioning some fantastic dream of futurity—also, alas! to eventuate in nothing more substantial than transitory “Castles in the Air.”

The Marine panorama as seen from the beach here is not to be equalled on any other part of the British Coast. Morning, noon, and night provides us with an ever-moving and ever-changing picture, illus­trative of our complete domination of the world’s shipping. Every class of vessel from the mighty battleship and graceful mercantile “liner,” to the humblest wherry, both inward and outward bound pass this way every day, and every hour of the day, rendering it extremely difficult for “the man on the beach” to pass a wearisome hour. Many seaside resorts will envy Canvey-on-Sea for its excellent bathing facilities, which may be freely indulged in here at any state of the tide, where children can safely wade on firm sand in pure sea-water, without the suspicion of coming away with mud-stained clothing.

Fishing and shrimping, and the gathering of winkles, mussels, cockles, and clams in large quantities may be freely indulged in here by all those who have piscatorial and bivalvular inclinations and tastes. In pursuing these acquatic proclivities the ozone-laden breezes of the North Sea will bring colour to the palid cheek and lend a lustre to the eye of the wan, which in themselves, will speak volumes for the natural healthfulness of the whole place.

As a health resort Canvey Island has few equals on the Eastern Coast, and its death-rate is abnormally low. Of the inhabitants it is said that they live as long as they like; and the aborigines will candidly tell you that no undertaker can live, much less thrive on Canvey Island. They evi­dently have no use here for anyone following this lugubrious profession. Fine stalwart specimens of active longevity simply permeate the whole Island, until one wonders if they ever die, or if it really be true, as is locally said of the “Canveyites,” that they simply shrivel up of extreme old age and eventually get “spirited” away, or otherwise mysteriously disappear from this mundane sphere. Be this as it may, however, Canvey-on-Sea is an ideal place for health, quietude, and recuperation, and should afford a welcome refuge for the valetudinarian. 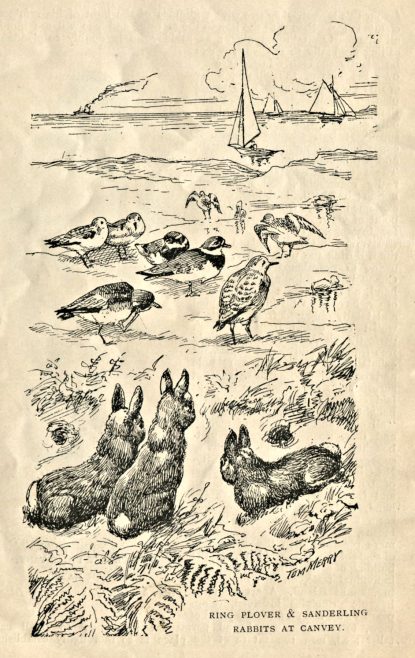 Climatically speaking, it is a land of eternal sunshine. Its geo­graphical position lying as it does longitudinally east and west, entitles it to this nomenclature. From sunrise to sunset in his diurnal course, “Old Sol” never quits Canvey Island when he condescends to favour this terrestrial sphere with a glimpse of the light of his refulgent countenance. Rise with the lark in the morning and you will see him in all his early matutinal glory; at midday he is doubly resplendent, sailing gradually to the west, where he silently sheds his lustrous glow over the face of the shining water ere he gives place to his nocturnal planetary compeers -the moon and the stars. Yes, Canvey Island not only registers a maximum of bright sunshine; but, singular enough, it experiences a minimum of rainfall, and a practical immunity from fog. These two latter phenomena are really remarkable, and are worth noting; but both, doubtless, can be explained away from a scientific point of view. Take especially fog for instance. The present writer has been on Canvey Island many times during the past winter, when, owing to prevalence of fog in the Channel, the shipping on the one hand, and the Essex Hills on the other, have been thickly enshrouded and totally obscured from the view, whilst the Island itself has been perfectly clear, and comparatively free from this murky and unpleasant exhalation. With such a reliable and equal climate as this, it is not surprising to learn that the land, as laid out in plots, is being eagerly bought up at a very cheap rate by ” all sorts and conditions of men; ” and that, no sooner are the plots bought up than building activity supervenes with a surprising celerity. Neat bungalows of every description of building material—wood, brick, and iron—meet the eye on every hand, and very picturesque they seem too. To persons of limited means, we can conceive nothing more practical than the acquisition of some of these plots of land, and the building of a dwelling suitable to the individual taste, on this health-giv­ing, sunlit Island. Apart from the hygenic principles involved, it ap­pears to us, from a financial point of view, to afford a sound and permanent investment to small capi­talists; as, now the future of the place is so thoroughly established, land hereabouts is bound to rapidly increase in value. But we are digressing. Those voluntary toilers of the deep — yachting-men—will find in Canvey Island all that is to be desired in the way of harbour and other accommodation as a yachting centre. With a bungalow on the Island, and a neat little craft anchored in Hole Haven, any man of leisure can enjoy his sport in perfect freedom. The rowing-man will find himself amply provided for Already a yachting and rowing club has been established, and in tKe course of the coming season much may be heard of the prowess of its members. Old English sports too, such as cricket, football, and golf, from the very flatness of the Island, will find a natural and acceptable field here. In the season wild duck, plover, and curlew abound, while the “furry” tribe, as represented by the hare and the rabbit, will afford the shooter sport in abundance, and all this is to be found within thirty miles of London.