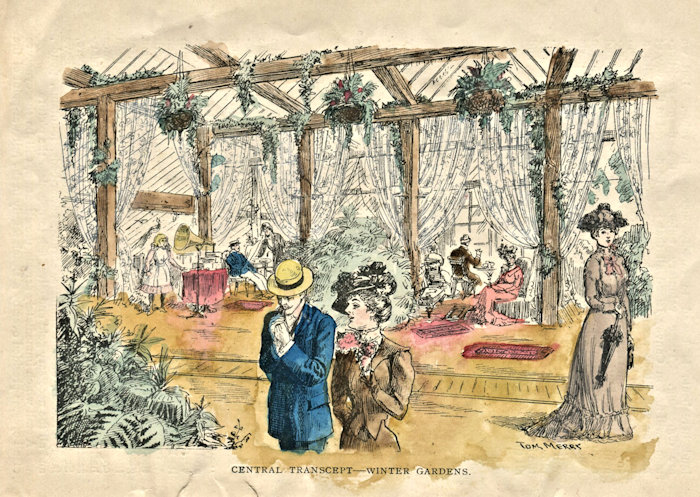 Bidding adieu to what we may be permitted to call the suburbs of Canvey Island, we leave the mainland and cross, via the ferry, to the landing-stage, adjoining the premises and house­boat of the “Mud-lark Club” on to the Island itself, and taking the London Road, we arrive at another of those old-fashioned “Wicks ‘ we have previously commented upon, called Waterside Farm, and keeping the cinder-path to the left—which is now rapidly being con­verted into a proper road—we strike straight across the open country with its Flemish dykes in lieu of hedges, to the entrance of the Vermuyden Winter and Summer Gardens. We enter, and are literally surprised with the wonderful progress that has been made in the interior of this elegant glass structure. When completed it will be six miles in length; but at the time of writing, rather more than a mile and a-half only has been completed and thrown open to the public. We pass the rustic entrance hall called the “Poet’s Corner,” from the numerous pieces of statuary scattered about, representing such poetical luminaries as Shakespere, Scott, Burns, Milton, Moore, Tennyson, Longfellow, &c. Here we have fancy grottoes, elegant climbers, shrubs, flower-beds, fountains, ponds, and all the necessary gold and silver fish to complete the picture. 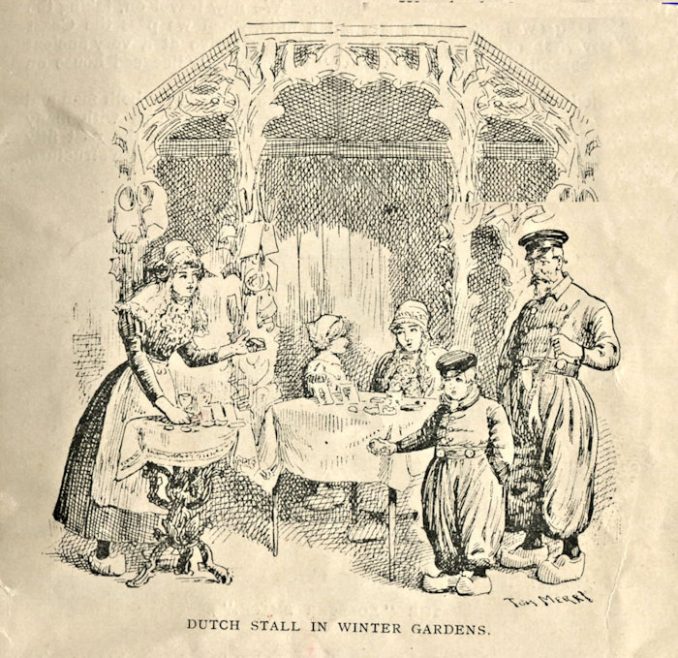 A stall which immediately arrests the attention, will be the cynosure of all eyes, is presided over by a Dutch family in the full war-paint of the picturesque Netherlands costumes. The women wearing that curious antique headgear, consisting of silver helmet, golden horns, and flowing Flemish lace veil—only to be met with when travelling in Holland.

We take the Central Transcept, and admire the choice climbers and shrubs on every hand, until we arrive at the aviary and stop to see the collection of live birds, including the gorgeous peacocks, proudly exhibiting their beautiful plumage. Further on still, we have the nucleus of what is destined to be a considerable menagerie. The scene again changes, and we find ourselves in an alcove, amidst thousand of fruiting tomato, cucumber, pumpkin, and vegetable marrow, vines tastefully trained—their cooling green foliage, affording a comforting shelter against the penetrating rays of the sun. On either side we are confronted with espalier trees bearing peaches, apricots, and nectarines; and, as we pass up the long vista of supporting arches, the eye rests on flowering jasmine, honey-suckle, and clematis. We now arrive at a spacious cross-section of this wonderful edifice; and amid another galaxy of flowers, we discover a fancy bazaar, with all the usual varied attractions, and enter the refresh­ment rooms and have a cup of tea, or other light repast as may suit the palate, to the accompaniment of musical phonographs; and thus we pass one attraction after another, until we reach an exit, adjacent to St. Katherine’s Church, opening on the London Road. We emerge, and pass through the rustic village, noting the quaint old well, wooden buildings, and another ancient Dutch structure dated 1621, the interior of which is equally as quaint as the exterior ; and small though it be, it boasts an upper storey for sleeping accommodation. 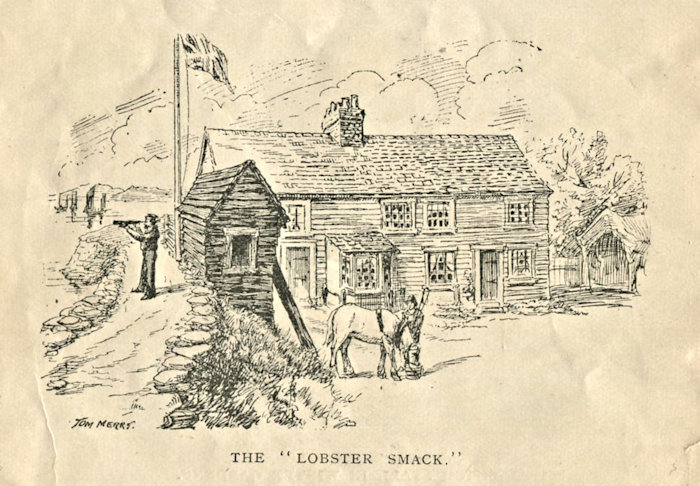 We now travel on, taking the sloe-hedged road, to the right for about a mile, when we pass the Coast Guard Station, with its prim gardens, and now arrive at a very ancient hostelry called the “Lobster Smack,” the only fully licenced house on the Island.

Here every class of accommodation can be obtained for both man and beast; and the host, Mr. Charles Beckwith, can regale us with many interesting incidents in connection with the Island, during the past fifty years of his residence here. The house itself is a large wooden structure, with comparatively lofty rooms, supported with old oak beams. The license dates from the time of Queen Elizabeth. Passing up the steps adjoining the house by the Coast Guard look-out, we find ourselves on the parade of the substantial sea-wall, built by Sir Cornelius Vermuyden, in the reign of James I., in 1622. On the right hand, we have Hole Haven and Shell Bay; and here we discover the partially submerged SS. “Benmohr,” lying a dismal wreck on the beach. 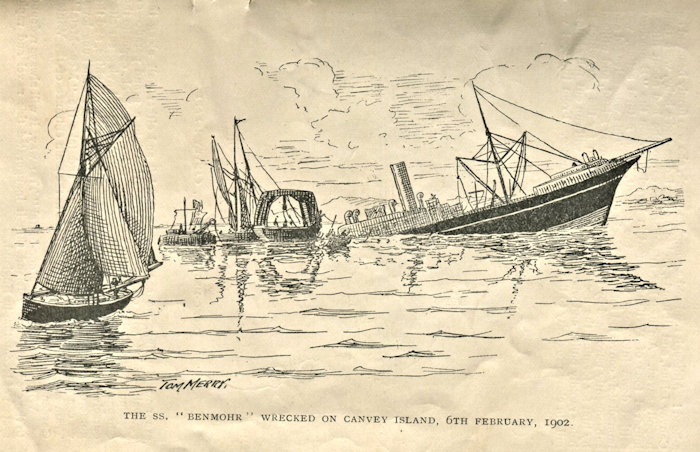 The “Benmohr” is a fine steamer of 5,000 tons burden. Its wreck on Canvey Island, at this psychological moment, is a pronounced illustration of the old proverb “It’s an ill wind that blows no one good.” She was bound for India with a general cargo, and in a dense fog collided with the SS. ” Bamfshire,” while nearing the mouth of the Thames, on the 6th February, 1902, and Captain Wallace, of the ” Benmohr,” recognising that his vessel was in danger of sinking fast, with that great presence of mind characteristic of the British sailor, put her head to the shore and ordered full speed a-head! Although rendered a complete wreck, she was firmly beached on Canvey Island, and all hands, including two ladies and a baby, were thus happily saved. Amongst her miscellaneous cargo, she had about fifteen hundred tons of Portland cement in barrels. When the “Benmohr” settled down into deep water, the cement, by a natural action, was immediately converted into solid blocks of stone. This was salvaged and subsequently purchased by the Developer of Canvey Island, and utilised by him for forming the necessary solid foundation for the pier, which is being rapidly built; and which, when completed, will run out fully half-a-mile in close proximity to the Chapman Lighthouse. From the spot we are now standing, we can turn to the left and either walk along the sea-wall—which will eventually be converted into a grand parade—or descend to the shell-beach and walk four miles to Lebeck, opposite the Chapman, where the pier is being constructed ; and, having surfeited ourselves from the seashore, with the sight of ever passing ships, and the numerous prettily designed Norwegian, Swedish, and Dutch bungalows, we can turn inland to the tramway station and take the “Mono-Metal ” Tramway, and retrace our steps back to the main entrance of the Winter Gardens. 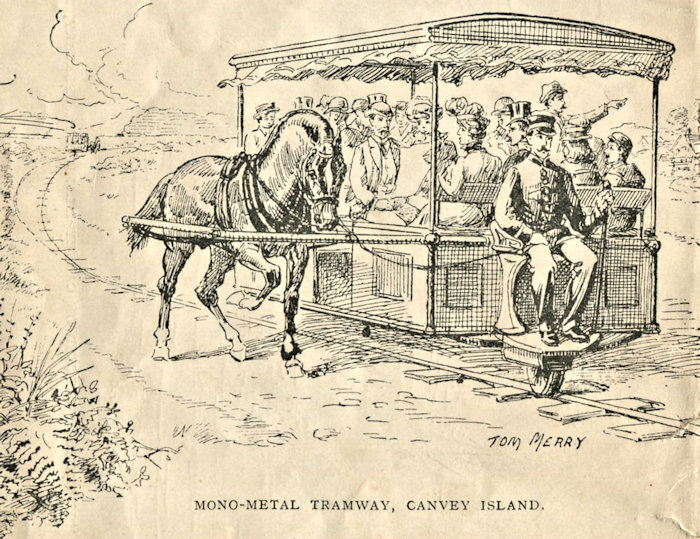 With regard to the “Mono-Metal ” Tramway, it will always redound to the credit of Canvey Island that it inaugurated this novel and rapid system of locomotion in England.

We can now either return through the “Winter Gardens,” or if preferable the “Summer Gardens”—immediately outside, and on either side and take a tour on the Grand Venetian Canal, by gondola, to a charming natural lake, where we can boat, or, by permission of the Developer, fish to our hearts content. At various points of the Island band-stands are to be erected, where, at stated intervals, sweet music will be discoursed, and possibly, Terpsichorean revels indulged in. A large Kursaal for indoor entertainments, and a library and reading-room for more studious of visitors, are also, we are informed, about to be added to the already liberal list of attractions. To show the up-to-date character those interested in the development of Canvey-on-Sea, the whole Island is to be illuminated with the electric light, and every house and bungalow will be connected with the telephone to the mainland, therefore a sense of isolation need never discompose the Island dweller. In fact, everything that it is possible to imagine is being done to secure perfect comfort, and considerable luxury for the future generation of “Canveyites.” Taking all these improvements and attractions into consideration, we confidently assert that a visit to the Island, will convince the most incredulous, that the future of Canvey-on-Sea is assured, as a health and pleasure resort— hence we feel it unnecessary to vouchsafe anything further on this particular subject. This is a history of the Island, and we naturally note the improvements now taking place, in order that succeeding generations may know what Canvey Island was like in the Coronation year of His Majesty King Edward VII.—when it emerged from comparative obscurity to a place of considerable importance.

Before concluding we should like to draw attention to the fact that, for some unascertained cause, and certainly for no substantial reason, an impression prevails that the County of Essex is an impoverished and unattractive one. We trust, in the course of our little excursion, we have contributed something to dispel this erroneous delusion. Taken on the whole, it is one of the most charming in England ; and possibly, the most charming and varied of the whole of the home counties—speaking from geographical, topographical, historical, antiquarian, and archaeological points of view. If in later years impoverishment to any appreciable extent, has overtaken this fair county, it is wholly and solely due to having experienced an extended period of agricultural depression, from which it has undoubtedly suffered in common, with every other county in the United Kingdom. But, however, with the recent re-imposition of the corn and flour duties, by the present Chancellor of the Exchequer, Sir Michael Hicks-Beach, there is no reason why Essex, generally, should not recover from this slight blemish, and speedily re-assert its position ; and once more arrogate to itself the proud distinction it held for generations, of being the finest and most prolific, corn-producing county in Great Britain.