You are here: HomenextPlacesnextAreasnextLakesidenextOysterfleet Farm

A story of Canvey folk

Canvey Lake is a remnant of Oyster Creek since the inning by the Dutch. There was an Oysterfleet Farm (see map) which stood to south-west of the arc of the lake, then in the section of Canvey belonging to North Benfleet parish. Old maps show Oysterfleet Farm with some form of enclosure, usually with two building inside it, which most likely amounted to a house and a barn. In his will of 1713 yeoman John Wakelin hinted at the poor state of repair of the dwelling: ‘…in case my said wife Johanna Wakelin shall build a house upon my said farm at Oysterfleet (which is needfull)…’ 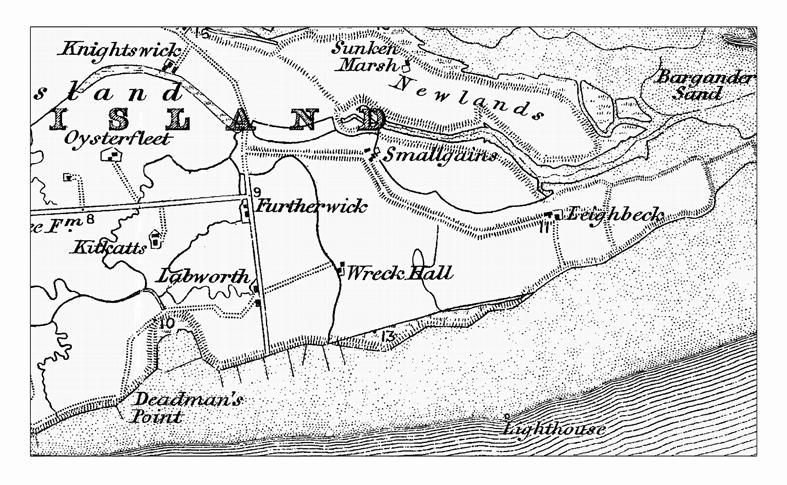 This map of 1884 shows the former connection of Canvey Lake with Oyster Creek to the east.

A publication of 1709 relates events at Oysterfleet Farm, recalling strange phenomena, when the miserly farmer, his long-suffering wife and all sorts of apparitions returned after his death, spooking the inhabitants. So, was the house built by Johanna Wakelin?
The printed account (1709) of the strange happenings ‘upon the 10th, 13th, 14th, 15th and 16th of September last, in the Day-time…’ gives some idea of Canvey farm activities, such as ‘…the Maid was scrubbing Cheeses at the North side of the Kitchin…’ or ‘…the Windows of the Beer-Room were broke again…’. We read of ‘…the Milk-House…’ and ‘…the Maid and Boy having milkt…’ and find some good Dutch names among the inhabitants come to watch. Apart from the farmer Jan Smagge, there was the Minister Mr Lord‘whose House was a short half Mile from this…’, Mrs Weakling (Wakelin), Goodman Lane, Mrs Skilder, Goodwife Cause, Grinaway (Greeneway), Goodwife Snusher, Mr Bell, Mr Weakling (Wakelin) and his daughter Mrs Cooper, Mrs James and her son… 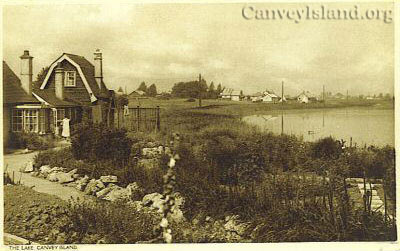 The Lake and later location of the Oysterfleet Hotel. Oysterfleet farm would have been in the area behind.

On the sparsely populated island most of the inhabitants seem to have turned up to watch. The name Wakelin would be familiar, of course, as would be Mr Bell, who might well be the Giles Bell mentioned in John Wakelin‘s will in 1688 as his son-in-law. Among the earliest Dutch settlers on the island and one of the elders of the Dutch timber chapel in 1655 was one Gilles Van Belle. Later the Bells of Thundersley Lodge were local merchants and landowners – some are buried in Benfleet churchyard. At the induction into the Benfleet vicarage of the Rev. Edward Roberts in May 1704 one of those present was James Lord, parish clerk. Haggar Greenaway was landlord at the World’s End – now the Lobster Smack – in 1770. John Greenaway of Canvey Island and Johanna Greenaway rest under a gravestone in Benfleet’s churchyard, though the dates are illegible. When Mary, ‘widow and executrix of John James of Canvey island’, married ‘gentleman’ Thomas Spittey of Rettendon, she took the unusual step for a woman of spelling out her ownerships in a pre-nuptial arrangement, listing what she’d inherited from her father Lawrence Skylder, what she ‘had subsequently purchased’, and in which she had right of dower as widow of John James.
More of the Canvey names mentioned during the paranormal happenings were recorded at the Epiphany Court Session in 1698, when Joseph Evans of Canvey Island (‘insula de Canvy’), was accused by John Smager, John Skilder, Peter Bell and Moses Eliams to answer the overseers of South Benfleet for ‘getting Mary Wapoole with child of a bastard’.

At the 1881 Census South Ockendon born William Kemp (37) was in charge at Oyster Wick Farm with his wife Hepsebah (difficult spelling) (34), from Thundersley. The birth places of their children indicate the route the growing family took before arriving on Canvey. Daughters Mary (11) and Elizabeth (9) were born in Rawreth, Ada (7) and son Ernest (5) were born in Eastwood, but daughters Ann (3) and Emily (1) were born on Canvey Island. 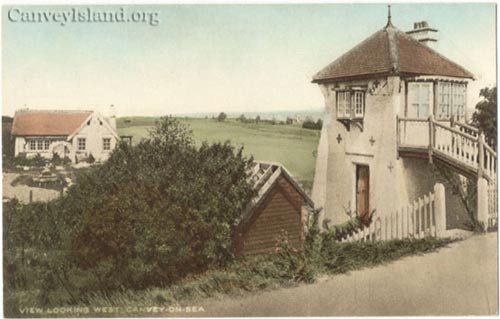 The Lighthouse at Lakeside Corner. The bungalow left became the original Oysterfleet Inn.

Oysterfleet land was one of the farms bought up by Frederick Hester. After that and in early photographs we find the Oysterfleet pub that used to be a private house by the lake. It had ‘the Lighthouse’ in its back yard, an unusual ‘granny annex’ that necessitated surmounting outside steps to reach the upstairs bedroom. The possibility must exist that the farmer at the time resettled by the lake.

Oysters used to be the poor man’s fish and chips, such was their importance to the diet of working men. The Imperial Gazetteer of England & Wales stated in 1866 under South Benfleet: ‘The waters on the coast were celebrated for oysters.’ Canvey’s red hills prove that people lived by creeks even in the centre of the island(s) in Roman times, producing salt, so it is very likely that oysters would have been harvested there, too. The map clearly shows the one-time connection of Canvey Lake with the creek to the east (marked as Oyster Creek on some maps). Oysters, as other shellfish, meat, wool and cheese would have been important exports over the centuries, especially to London and there may well have been numbers of oyster pits from which the creek and the farm took their names.

Does anyone know of a picture of the farm?