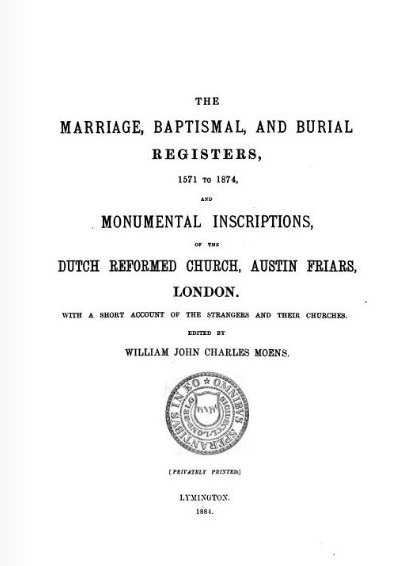 It is very quickly noted when trying to research the Dutch on Canvey Island that there are no records.

The first port of call is the Dutch Reformed Church, Austin Friars in London who held the records if any existed. These are no longer held by the church but are deposited in the Guildhall repository which I understand has amalgamated etc etc.

But we have been very lucky and found a copy available online. Pages and pages of records documenting the Dutch in London and other areas. Unfortunately as will be seen from the copies of pages from the registers below, Canvey Island’s documents are lost.

Whether any of the marriages for example have had their banns recorded here only time will tell. We have dozens of names to trawl the register with.

Below each scan is a transcript to help you read them. Anything we find will be reported later. 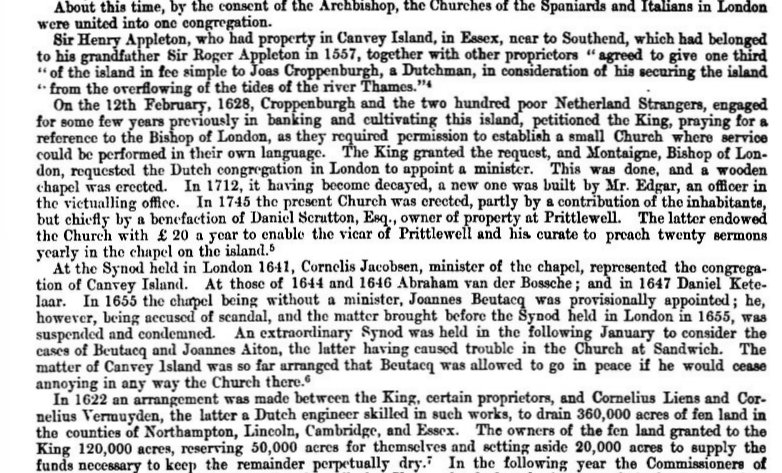 Sir Henry Applcton, who had property in Canvey Island, in Essex, near to Southend, which had belonged to his grandfather Sir Roger Appleton in 1557, together with other proprietors “agreed to give one third”of the island in fee simple to Joas Croppenburgh, a Dutchman, in consideration of his securing the island from the overflowing of the tides of the river Thames.

On the 12th February, 1628, Croppenburgh and the two hundred poor Netherland Strangers, engaged for some few years previously in banking and cultivating this island, petitioned the King, praying for a reference to the Bishop of London, as they required permission to establish a small Church where service could be performed in their own language. The King granted the request, and Montaigne, Bishop of Lon­don, requested the Dutch congregation in London to appoint a minister. This was done, and a wooden chapel was erected. In 1712, it having become decayed, a new one was built by Mr. Edgar, an officer in the victualling office In 1745 the present Church was erected, partly by a contribution of the inhabitants, but chiefly by a benefaction of Daniel Scrutton, Esq., owner of property at Prittlewell. The latter endowed the Church with £20 a year to enable the vicar of Prittlewall and his curate to preach twenty sermons yearly in the chapel on the island.

At the Synod held in London 1641, Cornells Jacobsen, minister of the chapel, represented the congrega­tion of Canvey Island. At those of 1644 and 1646 Abraham van der Bossche and in 1647 Daniel Ketelaar. In 1655 the church being without a minister, Joannes Beutacq was provisionally appointed; he, however, being accused of scandal, and the matter brought before the Synod held in London in 1655, was suspended and condemned. An extraordinary Synod was held in the following January to consider the cases of Beutacq and Joannes Alton, the latter having caused trouble in the Church at Sandwich. The matter of Canvey Island was so far arranged that Beutacq was allowed to go in peace if he would cease annoying in any way the Church there.

It will be noticed that the Marriage Register of the Dutch Church at Austin Friars is of a most im­portant character, the birth places of both parties to the marriage being given in every case; by means of which indications, research can be pursued in those towns where the refugees came from. The ” Lidmaten Boeken ” or Member Books of the Church from 1584 are fortunately preserved, though an earlier one is missing; an index of the first volume, arranged according to the baptismal name, only existing. These give similar indications in many cases, and it is my intention to devote some spare hours to the copying and arrangement of the names of men who were admitted members of the Dutch Church. Besides these, the Afkonding or Memorandum Books, where the banns were entered, also exist from 1615, these are also of great importance because many banns were published at the church at Austin Friars of Marriages which were celebrated at the other Dutch or perchance at English parish churches. These Dutch churches established in England were eight in number, viz., London, Norwich, Colchester, Maidston, Canvey Island, Yarmouth, Sandwich, and the Dutch Chapel Royal, St.James. Unfortunately, with the exception of the Dutch Church, Austin Friars, and of St. James, London, of Colchester and Norwich, all the Registers are missing. Those of Austin Friars are, as has been stated, perfect from 1571, Burials having taken place only since 1675.