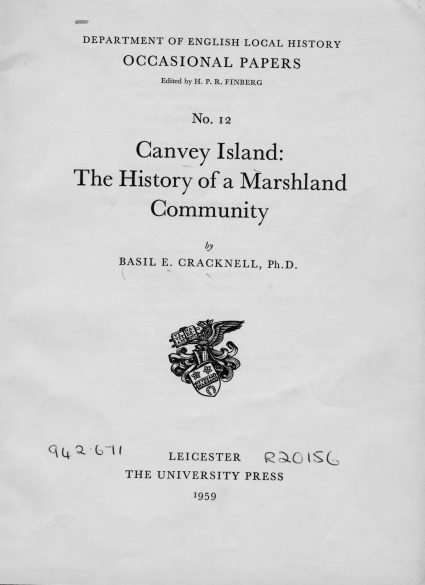 The first part of this chapter from Dr Basil Cracknell’s ‘Canvey Island: The History of a Marshland Community’ gives us some insight into what happened to the Dutch community in the 1700s.

§1.   The Maintenance Of Worship

For the next two hundred years, though the outward appearance of the island may have changed a little, its communal life was almost the same. Most of the Dutch people who remained abandoned their national language and form of worship and became integrated into the community. The only events which occurred to enliven the community were connected with the church or the old public house down by Holehaven Creek, whilst the occasional inundations, damaging as they were, must almost have provided a welcome break from the monotony of island life. Apart from their agricultural duties, the main energies of the community were absorbed in three directions, the maintenance of worship, the roadways, and the walls.

The first real break with the past was the arrival on the scene of a Church of England curate in 1709 and the pulling down of the old Dutch chapel which was replaced by one capable of accommodating eighty people. Dedicated to St. Catherine, the new structure was consecrated by the Bishop of London on 11 June, 1712. There were no wealthy families actually living on the island, and the building of the church was made possible by one of the absent landlords of Canvey, a Mr. Edgar, of the Victualling Office. Historians of Canvey Island have always been puzzled by the appearance on the scene of this unknown gentleman since he seems to have had no previous connection with the island. The solution to the mystery is at once simple and significant. Mr. Edgar was in fact none other than Mr. ” Otgcr,” patron of the original Dutch chapel and a member of the Dutch Church in London. This we know by the chance discovery of a copy of the original sermon preached by Samuel Hilliard, Rector of Stifford in Essex, at the consecration of the chapel on 11 June, 1712. The sermon is printed and bears the dedication:—

To the Rt. Rev. and Rt. Hon. Henry Lord Bishop of London: May it please your Lordship,

At your Lordship’s commands and the request of the generous Gentle­man who gave and endowed the chapel your Lordship has lately conse­crated, this plain discourse appears in public . . .

In the margin opposite the words “generous gentleman ” has been written in manuscript ” Abraham Otger of London—Gent.” This finally establishes the fact that the Dutch Church in London, rather than washing their hands of the little community of brethren on Canvey, actually paid for the con­struction of a new chapel for services to be held in English. They had clearly come to the conclusion that it was time the Dutch community became absorbed into the district.

There is some evidence that Dutch residents on Canvey had anglicized their names: for instance, the John Bell who was living on the island in 1742 was probably descended from Gilles van Belle, one of the Dutch settlers. Other Dutch names disappeared by intermarriage between the English and the Dutch. One such marriage took place in 1735 between Thomas Hansom and the daughter of a Dutch family on the island. In other cases the Dutch preserved their own names. Thus in 1720 there is a reference to a Mr. John van de Voord occupying a small piece of land on Canvey. [This family seems later to have moved to Prittlewell since we find an Abraham Vandervord occupying a cottage there in 1839.] In the following year, 1721, there is a reference to a Mr. Vanbord living on Canvey. Thus it is clear that at least some of the Dutch inhabitants stayed on Canvey and retained their Dutch names.