Thanks to Paul Chetwin for this great find. 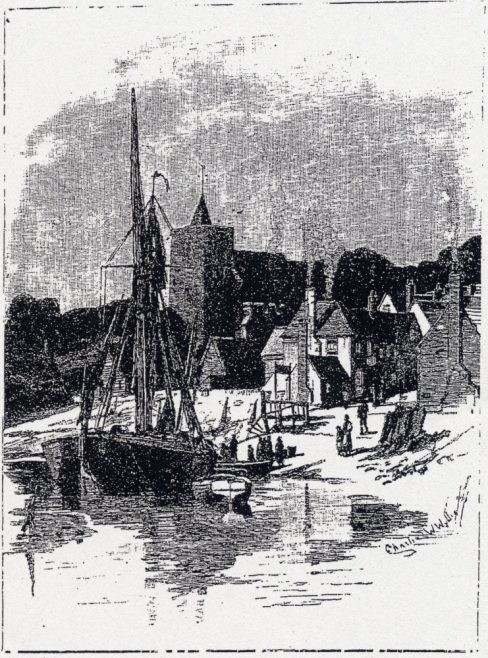 Though Canvey Island, on the Essex Shore, where the Thames widens to the sea, is within thirty miles of London, it is practically terra incognita; for even the owners of small yachts compelled to run into Hole Haven for shelter seldom explore the island, and guidebooks do not make many comments upon it. It is a land almost without history; only a few artists – seekers after the unconventional – know and love it for the sake of its quaintness, its beauty of colour and its vastness of horizon. The expanse of its mud-banks, which at low tide spread out from its shores, cuts it off from the ordinary holiday maker.  Mud, though the artist may revel in its tints and reflections of light, is not at all popular. It opens a vista of low fever and ague, but in reality it is not unhealthy. No doubt at one time Canvey was anything but salubrious; and Defoe, speaking of this in his ‘Tour through the Eastern Counties’ says that the decay of the fair sex in the marshlands of Essex was such that the men were obliged to find their brides among the healthier dwellers in the hilly country of the mainland, and that when these unfortunate women died, as they soon did after being transferred to the lowlands, the men went up again to the hills to get new wives. Defoe was even told that “in the marshes on the other side of the river, over against Canvey Island, there was a farmer who was then living with his five-and-twentieth wife and that his son, who was about thirty five years old, had already had about fourteen”.  All that, however, has been reformed long ago, and now Canvey, if damp and cold in winter, is healthy enough.

The island is reached from the mainland by a ford near Benfleet, a picturesque old town in which there is a church famous for its carved porch. When the tide is up the creek it is crossed by a ferry- boat, but at low tide it is necessary to wade through the mud to the other side, unless  a cart opportunely appears as a deus ex machina. Seen from the river, Canvey presents but a long beach and wall of grey stone surmounted by a line of grass, with a few buildings huddled together at Hole Haven, the western mouth of the creek surrounding the island. Once the entrance to the haven has been made and anchor cast, you might easily suppose yourself to be in Holland, for the island is shut from your view by a high weed-grown dyke, and, near at hand, Dutch eel-boats, waiting until their cargoes are wanted at Billingsgate, lie at their moorings. They are strange-looking craft, almost as broad as long, and in build they resemble those depicted by Vandervelde; they are grouped, too, just as in pictures by Dutch artists. The arrival of a small yacht deeply interests the skippers and their wives, who leave the peeling of potatoes to hold up their children so that they may get a good view of the strangers. On going ashore, the curious impression of having sailed into a small Dutch haven by mistake is deepened. But, after all, Canvey was practically made by a Dutchman, Joas Croppenburgh, who, in 1623, rescued the marshland, as it then was, from the tide by building a dyke right round the island; so that now, when you stand on the top of the wall the land spreads out below you and high-water mark; in fact, the island, is like an irregularly-shaped soup-plate with a flat bottom. A few of the cottages which Croppenburgh and his fellow-countrymen built while engaged on their labour still-exist, and extraordinary types of architecture they are, with their octagonal mud-walls and conical straw thatched roofs, with chimneys in the very centre; but, no doubt, they were well calculated to resist the force of the winter gales that rage across the low-lying country from the north-west.Their work finished, the Dutch settled on the one-third of the land given to them as a reward and built many of the farmhouses, some of which are tarred wood, while others are of red brick and roofed with tiles, on which many chill mists have sprinkled moss. Belts of bushes and shrubs surround the larger of the farmhouses, and clumps of elms and poplars grow close by, so that the effect of these quaint buildings, set as they are in long-stretching fields of corn and flower-decked fallow land, is most picturesque. 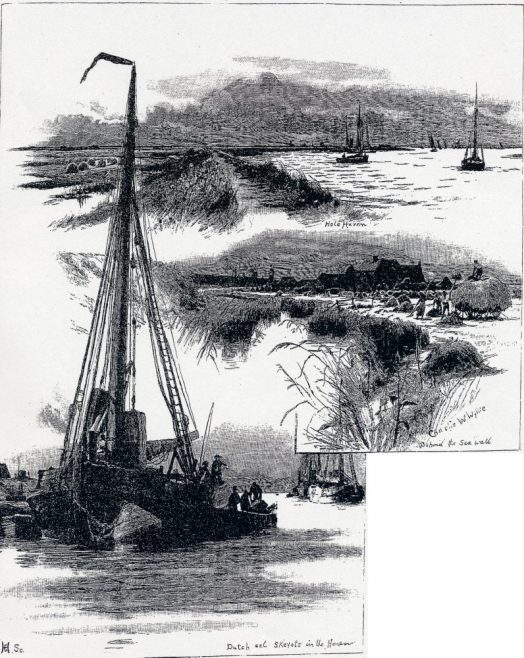 A compilation of sketches of Canvey. Top ‘Hole Haven’ Middle ‘Behind the sea wall’. Bottom ‘Dutch eel Skeyats in the Haven’

The principal inn of the island, at the entrance to Hole Haven, is an old building of white weather-boards, with a red-tiled roof. Its sanded parlour is the meeting-place of fishermen and labourers, and, there, in the evenings, the Dutchmen from the eel-boats play their fiddles and accordions to an open-mouthed circle.  Mine host, who is at once farmer and innkeeper, is the most important personage of the 280, or so, inhabitants. He is an enthusiastic lover of boxing, and speaks with pride, tempered by regret at a lost delight, of-having been a spectator of one of Tom Sawyers’ battles, which took place in this out-of-the-way spot. At a little distance inland is the one village, called “The Hills”, apparently on the lucus a non lucendo principle, for there is not a hill on the whole island, and only-the most vivid imagination can pretend to perceive even a gradual slope up to the hamlet. Here, surrounding some ancient elms, there are about a dozen wooden houses, which include a comparatively palatial rectory, a school and several private dwellings, where the few visitors to the island stay during the summer.  The village church, originally built in 1712, but so entirely reconstructed in 1875 that scarcely anything of the old building remains, is also a wooden erection, and is painted a light French grey, relieved by narrow bands of lemon colour; and as the other houses, with the exception of one or two red-brick cottages, are also painted in stripes, it may be imagined that this zebraesque village is extremely quaint, not to say gaudy. Canvey, previous to 1881, was divided among eight different parishes; and, in old days, when a service was about to be held-by no means a common occurrence then-a flag was hoisted as a signal for intending worshippers, an expedient delightfully characteristic of an island in which farm-labourers are to be seen working in semi-nautical dress. But it is not only the bizarre style of “The Hills” architecture, nor the Dutch farmhouses, that give a foreign appearance to the island. Old fleets, over-grown with rushes and nearly dried up by the summer heat, and roads bordered with flower-grown ditches instead of hedges, make you rub your eyes and wonder if Canvey really is in England; and, whether or not Dutch customs still survive, the preference for bright colours shown by the dress of the women and children is more characteristic of Holland than of England. Then no one is in a hurry in Canvey; the very horses take life easily, and the village girls think nothing of wasting an hour of their lovers’ time by flirting over the belts of rushes that separate the roads from the fields.

The best idea of the island, as a whole, is to be gained by looking northward from the top of the grass-grown dyke by the side of the Thames. Here is a picture of Canvey as seen from that spot. Above a narrow strip of cornfield, nearly on the horizon, the red sails of a barge, putting out to sea with the tide, move with stateliness, and the white wings of a yacht, beating up the creek, stand out sharply against the blue hills of the mainland. A little nearer the mouth of the creek, above the distant wall, the tall yellow masts of the Dutch eel-boats taper into the sky, and, beyond the farthest point of the embankment, the sail-draped yards of a ship, and the curling smoke of its tug are slowly moving seaward from out the west.  Strips of light green pasture, rich brown ploughed fields, bronze-gold corn and the red roofs of tree-encircled farmhouses lie gleaming in the sunlight, while, nearer at hand, fallow meadows, covered with red spiked dock, ivory-white cow-parsley, and, here and there, the yellow flower of a marsh-weed, are subdued in colour by the shade of a passing cloud. By the side of a farmhouse, far away across the island, a group of cattle, mere specks in the distance, is touched by the sunshine. At your feet, and all down the sloping grass-bank, a mass of flowers and purple thistles grows in admired disorder, and, at the bottom of the dyke, rushes wave and rustle in the shallow fleet. In the nearest field a reaper, clad in a blue shirt, pauses from mowing down the corn to sharpen his scythe. Innumerable white butterflies flit to and fro;  bumble-bees drone from flower to flower; and swallows poise in mid-air, and then skim over the sweet-scented meadows.  Above the sounds of the sharpening of the scythe, the rustling of reeds, the hum of insects, and the thud-thud of a steamer laboriously panting down to the sea, the rising tide, lapping upon the stone-faced-wall behind you, murmurs a liquid lullaby. Crowning the blue hills that are the background of the island, Hadleigh Castle and the square tower of Leigh church, with the red-roofed village clustered beneath it, shimmer through the noontide heat. Southward, over the broad Thames, lies the Kent shore, delicately blue, and, eastward, the sea, dotted with red and white sails, is a shining expanse of gold. Light fleecy clouds sail through the blue sky, and, as their shadows fall over the island, farmhouses and cornfields, sails of ships and distant reaches of river are, in their turn, cast into shade, only to gleam with renewed vividness when the sun bursts out again. Apart from its quaintness, the spacious skies, the vast horizons, and the beautiful effects of light and shade playing over the far-stretching plain, are the charms of Canvey Island, the miniature Holland in England.