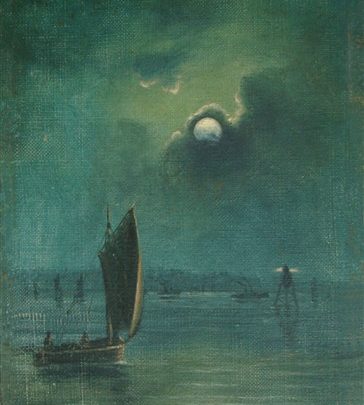 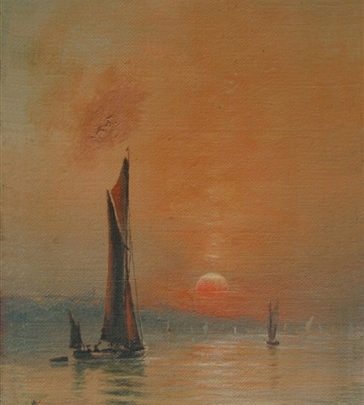 These oil paintings were originally included on a page by Robert Hallman.

It is thanks to Robert Hallman and Graham Stevens who owns the paintings that we have been able to find out more about the artist.

A comment on Robert’s page by Janice Shayes, whose late husband was Charles’  grandson, gave me the starting point to find out a little about his life.

‘Charles Lloyd Shayes was born in 1860 in Snodland in Kent to Alfred John Shayes and his first wife, Eliza Peters. Charles married Emilie Anna Augusta SEILER in 1882 at St Mary, Newington, Surrey where he had been living for sometime before his marriage, the couple had at least four sons and three daughters.

In the census for 1881 and 1891 his occupation is stated as Print Compositor. He later moved to Leytonstone where he was a picture framer and artist. It is believed he moved to Canvey Island in about 1920 and lived in a hexagonal? shaped house called ‘Estoe’ in Leigh Beck. He died in 1937, followed by his wife two years later.

The Dutch Cottage Museum had an exhibition in the late 60s – early seventies when two of his paintings were exhibited.

His son, also Charles, b1889, served in the Royal Garrison Artillery during WWI serving in France. Not long after Charles jnr’s marriage to Florence Wilson he joined his father on Canvey Island and ran a shop in/or near Thelma Ave. The couple sold water from a stand pipe amongst other things. He and his wife brought up a large family of 2 boys and 6 girls and for a while lived in Creek House not far from what is now the entrance to King’s Residential Park.’