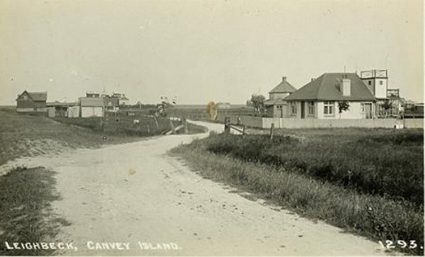 Postcard from c1910-1930. The house on the foreground on the right with the square tower facing South was called “Gate House”. The Fence running off to the right is now Southfalls Road. The Other road running up to top left of the picture is Approach Road. The building behind “Gate House” is Estowe. The dark building on the far left I suspect is Leigh Beck farm. The White sided Building to the left of Approach Road, but nearer than Leigh Beck farm is “Floss Cottage”..

As you will see from other articles we have about Charles Lloyd Shayes the artist we had some information from records and from a member of his family which gave us the following: Charles Lloyd Shayes was born in 1860 in Snodland in Kent to Alfred John Shayes and his first wife, Eliza Peters. Charles married Emilie Anna Augusta Seiler in 1882 at St Mary, Newington, Surrey where he had been living for sometime before his marriage, the couple had at least four sons and three daughters.

It was believed he moved to Canvey Island in about 1920 and lived in a hexagonal shaped house called ‘Estoe’ in Leigh Beck. We found him there with his wife in the 1929 Electoral Roll at ‘Estowe’, Van Diemens Pass, Canvey Island.

Thanks to Martin we now know a lot more information. Although still living at the address in Leytonstone as recorded in an earlier census Martin has found a record of Mrs E A A Shayes buying ‘Avondale Villa’ (Van Diemens Pass) in September 1905 for £6. (This was sold off by 1927) In September 1908 ‘Estowe’ was bought (then called ‘Elston Villa’) for £250. Charles L Shayes also owned a strip of land adjacent to ‘Estow’. It measured 180ft by 60ft and was bought for £60.It would appear that a wooden shanty was built on this plot of land where a Miss (or Mrs) Shayes lived or recorded as owned.

We knew his son Charles Allen Eugene Shayes was also living on the island. According to the 1929 Electoral Roll he was living with his wife Florence Beatrice at ‘Oysterfleet Stores’, Waaren Avenue, Canvey Island. From Martins research we found him 1924-27 at ‘Warren Cash Stores’ opposite ‘Eastleigh’ Oysterfleet at the rear of the farm house. The Oysterfleet farm house was in the area of Denham Road so I suppose Waaren Avenue could be the right place (Waaren/Warren??).

So we now know that the family had an interest in Canvey from 1905 although it would appear they did not reside on the island until between1915-1918. I must say the poor rate book records Martin found are very interesting but also confusing.

You will see from the maps and postcards etc below that Martin has pinpointed where the Shayes’ properties ‘Avondale’ and’ Estow’ in Van Diemens Pass was actually situated. ‘Estow’ was as described above, a hexagonal shaped house, as can be clearly seen on the postcards and if you look closely also on the aerial photo.