You are here: HomenextArtsnextArtnextHarry RussellnextA word portrait of a painting

A word portrait of a painting

On the back of the original, an oil on hardboard, sits a taped -on paper written by Harry. I have transcribed it here. It is undated. I can vouch for the crashing bomber, I saw it with my own eyes from the top of the house where we lived near to ‘The Point’.

St Katherine’s is now I understand, no longer a working church, but the headquarters of the local historical society.       David Russell 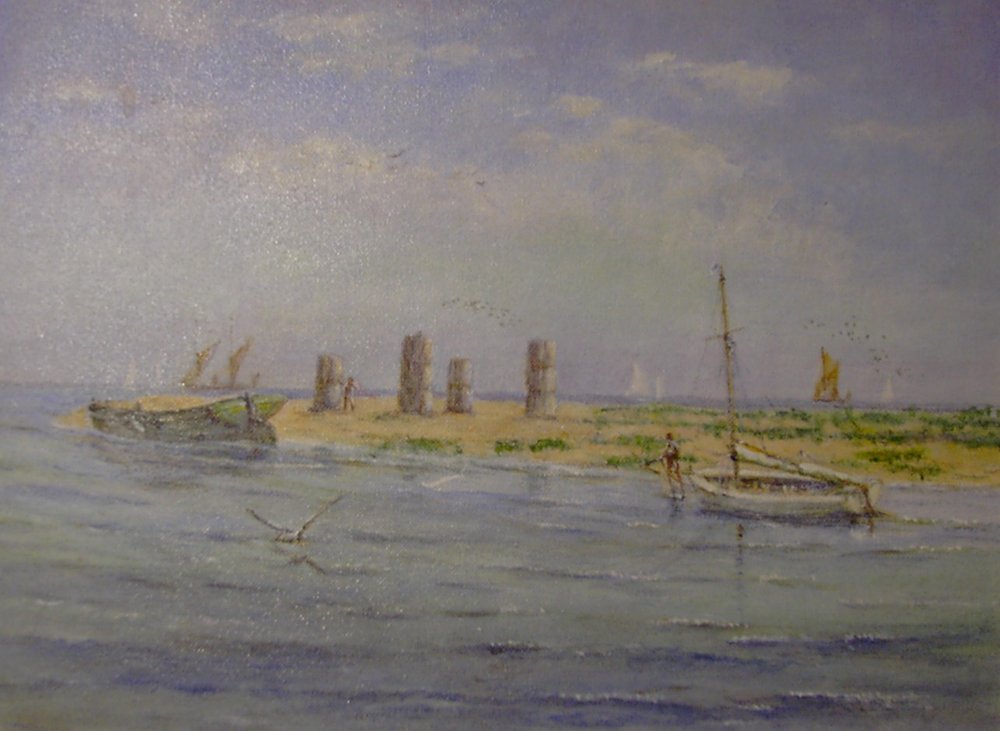 An impression of the point, Canvey Island, about 1920 showing the wreck of the Thames barge ‘Josephine’ and ‘Hester’s columns’

Hester was a speculating builder and developer, operating on Canvey at the turn of the century; he had many forward looking schemes in prospect. One of these concerned the building of the ‘Winter Gardens’ a name still borne by the area till this day. I think this is the story.

About the time Hester became busy on Canvey, a ship, the ‘BENMOHR’, carrying a cargo, amounting to some hundreds of tons of Portland cement, contained in wooden barrels, was sunk off the island, as the result of a collision with another vessel. The details of the subsequent salvage operation I know nothing about, but HH Hester acquired the bulk of the barreled cement; this is where the columns at the ‘Point’ come in, the barrels being used to construct the half dozen or so piers or columns, wired around a framework of timber, built up from a rough concrete foundation. Over the course of time the wooden barrel staves parted and fell away, leaving the hardened cement to stand the punishment of time and weather. The purpose of these piers was to provide a base for, it would seem, an ambitious building, whether as a dwelling or for commercial uses, no one now surviving would really know. 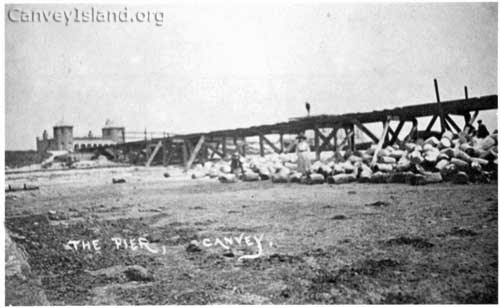 Before the final building could be commenced Hester’s Canvey Island empire had collapsed into liquidation;. this situation coming about in the years leading up to, and most likely in, the first years of the Great War; however, there they stood for decades, until the period following the second World War, when natural decay and other factors removed them from the scene.

In the twenties and early thirties, when the physical conditions and atmosphere at ‘The Point’ were so fresh and free from pollution of any kind, these old piers; at least to my unsophisticated intellect, took on some of the timeless sense of abstraction which one feels and associates with the giant figures of Easter Island and other places in the Pacific Ocean. All this may seem far fetched , but I can assure anyone that the extreme point of Canvey was beautiful, with its own brand of charm in my earlier years; sea birds, clean air and long uncluttered views.

My painting is only as accurate as memory allows, but in general all the main factors are disposed much as they actually were.

So the barge ‘Josephine’ or what remained of it when I was seven or eight years of age was lodged on the north edge of the bank which made Canvey Point. As I recall, the transom, with decoration and gilding of quite an elaborate nature, was in a fair state of preservation, and in these times would not have survived the attentions of some avid collector; however, I was too young to really concern myself with such matters.

Time went by and came a day in the year 1944, by which period little remained on the surface, of the old ‘Josephine’, the engulfing sand and mud having completed the burial, leaving little or no indication of the one time wreck. Thousands of feet above the ‘Point” a young American bomber pilot was fighting a losing battle to control his crippled aircraft from plunging earthwards, maybe into the middle of a densely built up and populated area. The pilot gave orders to his crew to bale out and save themselves, while he, with the last vestige of control, too late to save his own life, managed to turn the damaged ‘Fortress’ over an area of saltings and mars; a final headlong dive and the tangled mass of aircraft engines burrowed down to join the last vestiges of the Josephine.

It is a matter of recorded local history that the remains of that young man were interred, with full military honours at St Katherine’s Churchyard, the old village parish church. This epistle is my own small tribute to that pilot.