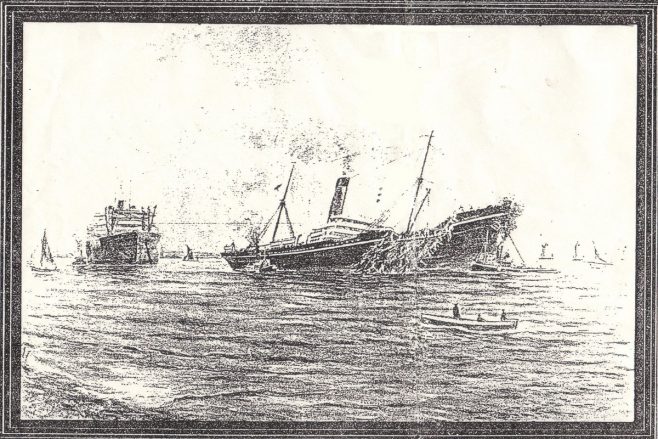 In the year 1924, getting on for thirteen years of age, I was living with my parents and young sisters in a bungalow at the Leigh Beck end of Canvey Island. We were all accustomed to the noises made by shipping passing on the river. The clanging of bells, the hoots and brays of sirens and foghorns were fairly commonplace but from about daybreak on Monday March 24th we were aware that there seemed to be an unusual volume of such sounds. This seemed to be coming from up river – towards the western end of the island.

However, so far as I was concerned, from about 8am the main objective in life was to get my two young sisters and myself along the half mile or so on the old point road, to Percy Nichol’s yard in order to get our seats on the school bus – the bus at this period being a rather dilapidated and ramshackle ex 1914-18 ambulance vehicle. Nichol’s yard, by the way, stood on the main road, at the top of station road, just across from where the Admiral Jellicoe pub now stands. This conveyance took we youngsters, with a couple of intermediate pick up points, to Canvey Village and deposited us by the village school at about ten minutes to nine. 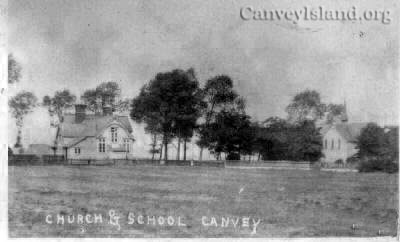 The school, a white painted, weather-boarded building, was just opposite the old parish church of St Katherines. This edifice is still standing but no longer doing duty as a place of worship. Instead it now serves as a museum and heritage centre. We older pupils at the school were housed and did our lessons in a portable wooden hut which had been erected on the plot of land at the rear of the old permanent buildings, part of which comprised the house and living quarters of whoever was incumbent Head and family if any.

Our hut we thought, was marvellous. The whole south side facing towards the river was window space. Our desks were arranged so that we were facing west, so that the light came over our left shoulders. Being seated in this fashion did not prevent us from taking a peek over our shoulder to see what was going on out on the Thames. There was nothing to obstruct our view right down to the ‘Lobster Smack’ and Sluice Farm. Craning round a little more we could see the old Kynoch’s Hotel – a little further back, but any traffic on the tide, with masts, sails and superstructure, we could plainly see. There was a vast amount of shipping in those days. During the summer months when the excursion paddle steamers were making their daily run from London to Southend and points beyond; we kids were able, when we saw the two-funneled ‘Royal Sovereign’ passing, to know that in another ten minutes or so, we would be taking our midday dinner break.

That meant an hour of comparative freedom – not totally free as we were not supposed to roam beyond the village where we were allowed to spend the odd copper on sweets. As well as the vessel just mentioned, there were at this time another four or five paddle steamers doing this daily journey. They were the ‘Eagle’ and ‘Golden Eagle’, forerunners of the ‘Crested Eagle’ and the ‘Royal Eagle’ – little ships that earned fame in the second world war. Also there were the “Belle” boats – ‘Clacton Belle’, ‘Margate Belle’ , ‘Yarmouth Belle’ and ‘London Belle’ etc. Then of course there were the magnificent passenger liners of the Cunard Line, the Orient Line, the P&O Line and the great swash-buckling vessels of the Atlantic Transport Line – ‘Minnewaska’ and ‘Minnetonka’. There were too, fleets of fine cargo steamers such as the Blue Funnel Liners, Harrison Liners, Clan Liners and many others too numerous to write of here. One line of steamers, of which I had never heard, before this day in March, was ‘Shaw Saville and Albion’ It is a vessel of this company which forms the centrepiece of this chronicle.

I have written in the foregoing on the shipping continually passing our school viewpoint, in order that it can be understood how much the river Thames and its traffic interested and educated us – like a living scroll of knowledge. Anything out of the normal would arouse our curiosity, such as the sight of the two steam ships apparently at anchor just off Hole Haven, the stretch of water that was overlooked by the ‘ Lobster Smack’ inn. The ship which appeared to be nearest was laying at an awkward angle, which threw the masts and funnel and as much as we could see of the bridge superstructure, completely out of perspective. 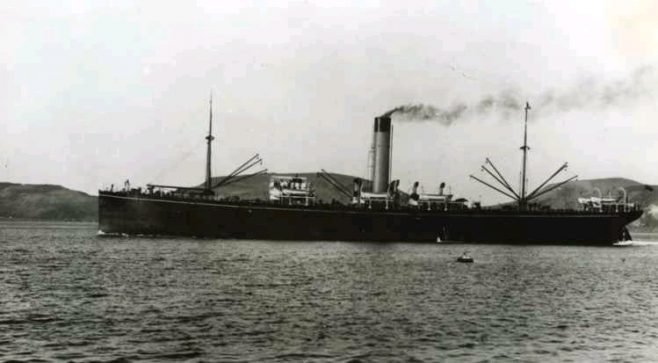 This was the ‘Matatua’ of the previously mentioned Shaw Saville line, as I found out subsequently. The other ship at anchor further out in the river turned out to be the ‘American Merchant’ of the United States Line. Before I learned of the Shaw Saville and Albion company, I thought Matatua was a ‘White Star” steamer owing to the buff, black topped funnel. There were also the masts and funnels of various steam tugs, sundry fishing boat masts, and plumes of smoke and steam arising from the assembled vessels – all adding to the picture created.

I do not want to give the impression that in school we did no lessons that morning, but nobody had spoken of any untoward happening taking place over the seawall. However, there was obviously something out of the ordinary out there where the ships were anchored, so, come break time, although we were not supposed to do so, one of my friends and myself set out along Haven road to satisfy our curiosity. When we reached the sea wall and climbed to the top , the sight was something we had not expected – dramatic and tragic.

The ship we could see way back from the village, listing at an awkward angle, was in this position because it was halfway beached on the mud or sand spit that ran out on the far side of Hole Haven creek. On the starboard side from the bows to nearly back to the bridge superstructure was a vast hole torn in the fabric of the vessel, from which hung an obscene raffle and tangle of torn and rended steel, twisted pipework and torn and splintered, smashed woodwork. There was all the hideous jumble of displaced bulkheads, smashed lockers, crushed and distorted fitments, that went to make up the crew’s living quarters

Working amid all the debris were parties of men with stretchers still searching to find and free the remains of those crew members who had been killed in their bunks. This was when I learned that this ship was the ‘Matatua’. Having seen all I have attempted to describe, it was more than time for we two schoolboys to return to the village and school, where we received a ‘wigging’ for going absent.

It was only by general gossip and word of mouth that any further news of this incident filtered through, certainly to we youngsters. It became known that several seamen had been killed and others injured in the collision, but it was not until many years later that I recalled the occasion and started to research back for fuller details. Over the course of time with an ever growing interest in ships and shipping, I kept an eye open for the name ‘Matatua’ to crop up. In a Lloyds list or a magazine but the other ship, the ‘American Merchant’ I know went on to trade as before between London and the USA. In fact I think that vessel gave us a near pass when I was about seventeen years old out sailing with a party of sea scouts.

To return to 1924, my memories of unusual fog horn noises, etc from an early hour were right as it appears the impact between the two ships took place about 6am that Monday morning. Much information was afforded me a matter of six months ago and this is being penned in the late summer in 1989. My source of information was the Central Library in Southend on Sea.

Here in Southend I was able to pinpoint the date as memory could only tell me that the time was early in the year about 1924/5. It was in the micro-fiched copies of the ‘Southend Standard’ that I found the facts as to how and why the crash came about. ‘Matatua’ had come down from the Royal group of docks in London to anchor off Hole Haven in order to take on a consignment of explosives – dynamite and suchlike, and here digressing, I do recall that anchored in close call were several Thames Barges each flying the red flag that indicated they were carrying explosives.

This area was the normal ammunition anchorage. In later years it was moved to a point some two miles east of the old Chapman Light. ‘Matatua’ was either at anchor, or just coming to anchor when the inward bound American Vessel sliced into her side, with dire results. I recall that the weather was rather quiet and grey and there appears to be some question as to whether at that early dawn time it was also rather misty on the river. There was of course an enquiry into all the circumstances, but any findings on this would have been more likely reported in shipping and trade journals, than in weekly papers like the ‘Southend Standard’.

There were eight men killed and three injured of ‘Matatua’s’ ship’s company . The eventual fate of the injured men I have not found out. The stem of the ‘American Merchant’ was slightly damaged, but from all accounts was speedily put right and enable the ship to return to normal duties. There appears to be a discrepancy in naming the American ship involved as the ‘American Farmer’ – while my reference book on the Shaw Saville and Albion Line names the ‘Merchant’. However, apart from name, the five ships of that class were similar in build – no nonsense, robust looking cargo ships with accommodation for a dozen passengers. Their dimensions were, length 450 ft, beam 50 ft, registered gross tonnage of 7,430 tons.

Further seeking on my part into the history of the Shaw Saville and Albion Company brought to light the fact that ‘Matatua II’ as she really was, started her career in February 1904 on the run Glasgow – Liverpool – Australia, but seems to have been a jinxed ship. Early on she was rammed astern by another vessel, which necessitated docking and repair work being carried out before being put back into service. During what would have been her maiden voyage her propeller shaft snapped and the rudder jammed. In 1916 she was damaged by a fire in dock in Montreal. In this event her captain was killed while trying to save the ship’s papers. She had to be scuttled in order to quell the blaze. On the return voyage to Britain she went aground off Newfoundland.

In 1924 came the collision in the Thames off Canvey Island. ‘Matatua’ changed hands several times later on and was finally consigned to be scrapped, but the British Admiraly stepped in. This time during the second world war it was decided to sink her as a Block Ship in Scapa Flow, but though being towed to take her final position, it was just too late to prevent the U boat U47 under Prien sneaking into the flow and torpedoing the battleship ‘Royal Oak’ with heavy loss of life. ‘Matatua’ was finally broken up in 1951.

A sad and dismal tale to tell of a vessel which had belonged to a shipping company with many inspiring episodes in its long history, right back from sailing ship days to providing the fine vessel ‘Gothic’, which for the purposes of her tour became the Royal yacht when HM the Queen and HRH the Duke of Edinburgh toured Australia, New Zealand and other far flung outposts of the Commonwealth in 1953