Painted and written by Harry Russell 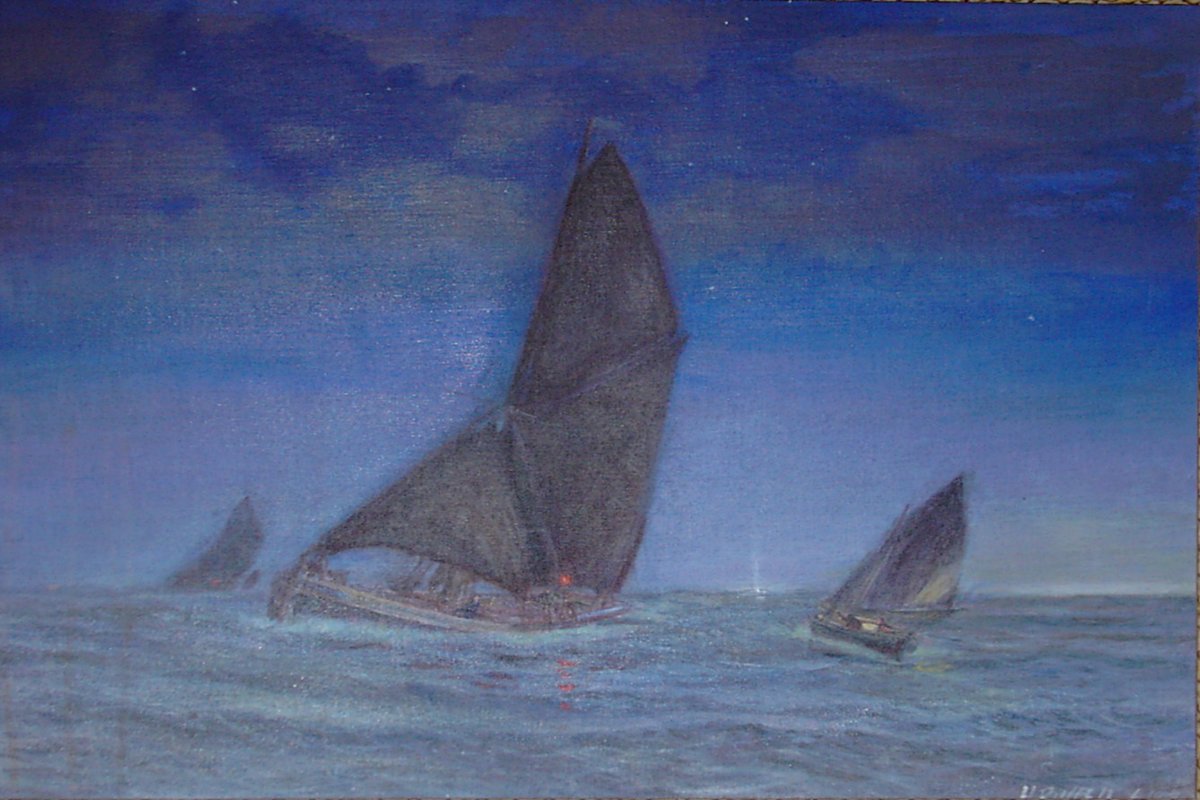 The Black Cat barge. Encountered by the young Harry Russell in a small boat near the Whittaker light off the Maplin Sands. About 1934

There is a document attached to the back of the painting, which reads:

Title to a painting “Barge and Black Cat”

I can’t be positive,after a lapse of fifty odd years, but I think the barge was ‘Portlight’. This was one of the better known names in the Thames barge world way back in the 1930s, when these vessels were at a peak in terms of numbers working in and around the Thames Estuary, and the east and south coasts of England. ‘Portlight’ was built about 1924, for HF Hordock of Mistley in Essex and became one of their well kept fleet – she had a long and busy career, but in company with many of her kind, somewhere in the 50/60s lost the glory of her masts and sails, to finish as a motor vessel – what the eventual end was, I do not know.

A number of barges still survive under sail, but these are mainly in the hands of preservation societies and similar bodies, though a few are owned privately.

The various owners and preservation committees get together and promote the traditional sailing races, during the summer season, notably from such places as Maldon, Southend and Rochester, over on the river Medway in Kent.

It is still a sight worth seeing, when a dozen or more of these craft show their paces in a fresh breeze.

‘Black Cat’ was originally owned by Geoffrey Prout, father of the men Roland and his brother Francis, now famous worldwide for their catamarans.

Before it became Black Cat this boat was just the shell of a small ship’s lifeboat, laying more or less discarded and derelict, on the saltings at small gains creek, Canvey Island. I think that it actually belonged to Uncle Bert’s father, William Mcrerie, who probably sold it to Geoff Prout for a song.

However he made a sturdy little vessel by decking it and forming a cabin top big enough to give shelter and sleep for a party of four,after bunks were added. To add to such comforts as there were, a small coal stove was installed in the cabin. About this stove, I could recount more but mustn’t digress too much.

The mast and sails, which completed the transformation, were both tough and heavy, making a very stout and workmanlike craft, capable of standing up to some pretty heavy weather and rough conditions. I was to spend many, to me happy and adventurous hours, both with Geoff Prout and the subsequent owner of Black Cat, Dennis Bendy.

It was with Dennis that I was sailing when we had our pictured meeting with the barge on a summer’s night in the year 1934.

We had set out from the Ray, off Canvey point, so far as I can recall, late on Friday afternoon, on an ebbing tide, with the breeze astern falling light as the evening drew on. Our intention was to sail round to Burnham on Crouch for the weekend. It is a considerable distance from Canvey Island out and around the Whittaker Spit, then back into the Burnham river and really one needs a fast boat and favourable winds to make the journey in a weekend and without the aid of a motor.

One also had to carry favourable tides and Black Cat could, by no stretch of the imagination, be regarded as fast. Weatherly yes, but swift , no. So it was that we just drifted on the outgoing tide past Southend and out into the converging shipping lanes of the Thames Estuary.

Somewhere in the vicinity of the old Nore lightship, we looked up and found we were drifting right across the path of a large outward bound P & O ship- the ‘Mongolia’, which bore down on us and I have always considered it was only the mass of water she was pushing in front of her that threw us aside. Next we were tossed up and down by the five or six foot wash in the wake. From the decks of Mongolia – so far above us – interested passengers gazed down on the little Black Cat with its terrified crew of Bendy and me.

After we had collected our wits and made sure nothing had bounced overboard, we tried to set course for the Mouse light vessel and a breeze making itself felt gave some control of movement allowing us to get free of the main shipping lanes, which could be very busy in those times.

By now it was dark, with a stiff breeze blowing, and it wasn’t long before we were in a thunderstorm , with torrential rain followed by a gale, forcing us to reef in our sails, an uncomfortable job in the pitch black, as it had become. In the end we sailed under the lee of the Maplin Sands into smoother water, dropped our anchor, probably made some tea and just waited for the weather to ease and the storm to blow itself out.

Eventually it did and we set sail with a steady offshore breeze over our port quarter. It was thus that about 3 a.m. that we met up with the barges. ‘Portlight’ close to and another, just discernible, perhaps a quarter of a mile away on a parallel course. They were both London bound, with the wind free to us, giving them good full and bye sailing.

By that time of the year, July, apart from a faint plume of light to the north, probably thrown up over Clacton on Sea, there was just enough early pre-dawn light showing up in the north-east for us to see the main detail but not much colour on the barge as she swept past us.

Near enough to see the skipper and his mate and to exchange shouted greetings, over the noise of taut strumming rigging, rushing and gurgling water under the forefoot and along the side into a tumbling phosphorescent wake, there was sufficient light for me to take in and appreciate what a truly magnificent spectacle that vessel made as she swept past us only yards away. These barges were kept in tip top condition by their crews and even in the half light it was possible to see that the paintwork gleamed and that all was smart and ship-shape. As I can recall that brief moment in time so I realise I cannot do my impression justice in paint.

On the northern horizon there was the intermittent flick of a light probably from the ‘Whittaker’ and this also gave a gleaming reflection from Portlight’s surfaces which encompassed painted deckrails and washboards to the straining oiled tan sails.

It was all past and gone in maybe two minutes, but the memory still remains to savour.

I can’t really recall a great deal of the rest of the weekend. Dennis Bendy and me, we never did reach Burnham that time. Instead, as the new day came up the wind dropped again and I do remember that at about mid-morning it was dead calm. The sea like oil, over to the land, which from our position was barely visible, the sky was banked up with cloud and thunderstorms were growling in the distance.

There were a number of yachts and fishing boats all some way off but such were the atmospheric conditions that these other craft seemed to be suspended in mid air. It wasn’t possible to see where sea ended and sky began. Under these conditions it began to look problematical as to whether we could even sail back home, but somehow we must have found some wind and a favourable tide, because somewhere about half past six on Monday morning we had our next little incident.

This I do remember, that again we were more or less drifting with the ingoing tide a couple of miles seaward of Southend pier.

I was at the helm of Black Cat. I think Dennis was getting some grub ready down in the cabin. Astern of us and spread out well apart were three of four small motor coasting cargo vessels. There were a great many run by Dutch in those days, but one nearest to us was dead in line and although it seemed a rather dull morning, visibility was fair.

We couldn’t positively sail out of the way and in a minute or two it was obvious we were going to be run down. I shouted to Bendy, who came out of the cabin. Whatever possessed the man on the wheel of the coaster not to make some avoiding action – well I don’t know. Dennis Bendy rushed forward and tried to fend off with a boat hook ,but as with the Mongolia pushed along by the ‘Harwarden Castle’ which was the name of this troublesome vessel, that threw us aside. No damage was done, except to our nervous systems, but as we bumped clear a startled looking individual in a white sweater and with a sailor’s type peaked cap on his head apparently dashed out of the wheelhouse to look over the side at us. I imagine from the expression on his face as I recall it, he must have either been asleep, or certainly absent from his post at the wheel.

I don’t remember the rest of the journey back to Small Gains creek – I think it was on another occasion, while out for a sail on the Cat’ with Dennis Bendy, that the tiller, which was fashioned out of a length of iron pipe, about four feet long, broke off and I fell overboard clutching it. You ought to try swimming after a boat sailing away from you, holding onto a great lump of iron. But I will recount that episode another time, with some odd items about the coal stove in Black Cat’.

Note: we never found any such account – more’s the pity. DPR