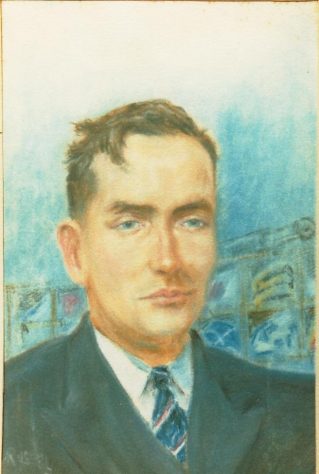 Vic Ellis, when still a dental technician on Canvey Island, was given drawing and painting lessons by Harry.

Much to Harry’s private disgust, Vic improved so much he went on to become a successful commercial artist and a member of the Royal Society of Marine Artists and painted many shipping fleets for their owners and operators. A typical high quality painting of his ‘Barge ‘is shown here, from a photo given to Harry by Bunty, Vic’s wife, for Christmas 1984.

Vic lived out his final years in Leigh on Sea, where he had a studio and they remained firm friends, though Harry always felt that Vic ‘was too commercial’ to use one of his kinder remarks.