You are here: HomenextArtsnextArtnextRivers of Great Britain. The Thames from Source to sea

Rivers of Great Britain. The Thames from Source to sea 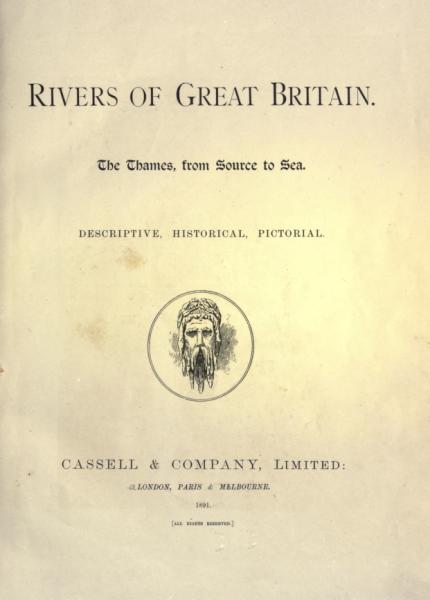 This book was published by Cassell and Company Ltd in 1891 and the illustrations shown here are by WW May. I have not so far been able to find out anything about this artist. Chapter XII at the end of the book is the chapter ‘Gravend to the Nore’ by J. Runciman where there is a very good description of Canvey Island. It also goes on to describe Hadleigh Castle and Leigh.

There be many men in London who count Ben fleet Station as the entrance to Paradise ; and it is a very pleasant sight to see the smart shooters dispersing on a brisk, frosty morning. Below Canvey Island,and over the immense flats of that dismal place, the heaviest bags can be made with a big duck-gun.

A small boat soon shoots round the Lower Hope and into the westerly channel that flows around Canvey Island. At high tide the boat will travel easily up to the seawall, which rears itself like a strong fortification at the innermost edge of the saltings. The wall is overgrown with sea-weed, and the very steps by which one gains the Coastguard Station are slippery with sea-grass. Inside the wall the stretch of the island lies, as it were, in a great basin. Corn waves, bright meadows shine in the summer, and marshy streams creep slowly into the channels that cut the weird place away from the mainland. A wild and forbidding place is Canvey Island. The strong sea-wall is gruesome with its shaggy wreaths of trailing weed. The inner side is well covered with coarse grass, and from thence away to the northward a flat of somewhat repulsive aspect runs as far as Benfleet. The island has a peculiar population. The coastguards’ hamlet lies close to the wall, and the men are ordinary, sailors; but in the villages of Canvey, Knightswick, Panhole, and Lovis, there is a scant population of people who have their own ways, their own traditions, and their own methods of regarding a stranger. They are singularly hospitable, for free-handed sportsmen find the island a happy hunting-ground, and the people expect and give kindness. The one little inn by the Coastguard Station is, perhaps, the quaintest in all Essex. Memories of smugglers, of desperate water thieves, of old collier sailors seem to hang about its low walls. No one need expect comfort there, but the keeper purveys for all comers with a rude hospitality which is amusing. On the Fobbing side of the island the ditches are very deep, and the sides soft and treacherous. Once a bird is shot there it is very difficult to recover it. All the dogs kept on the island have a singularly business-like air, but no one would care to let a valuable dog follow his game down these steep, gluey, ramparts. To the east, however, the saltings stretch far towards Canvey Point; and it is not only safe, but absolutely pleasant to walk over them before the tide creeps through the rough herbage. 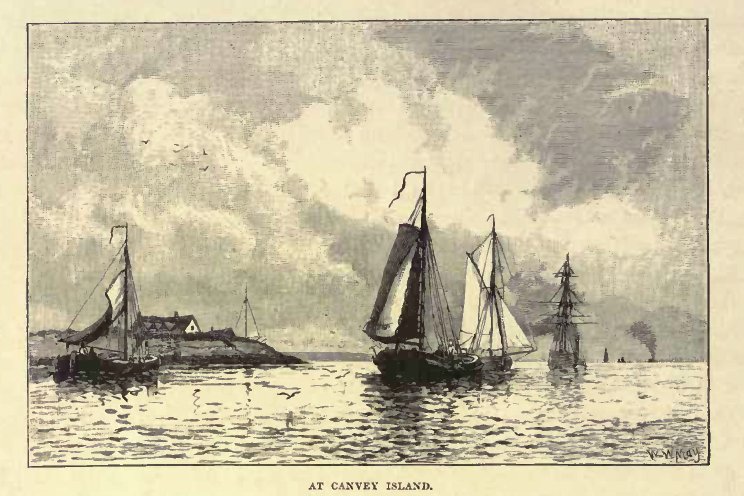 Hardly a shore-bird known in the British Islands fails to visit Canvey. Looking through a telescope from Benfleet Station, it is easy to pick out the flocks as they consort in their different communities, and squat among the mud, or pick their way carefully through the twining grass. At one time, on a frosty morning, it is possible to see dotterels, plovers, redshanks, gulls, and pipers, all busy on the eastern flats; while to the west the cunning curlews dodge on the slippery banks of the Fobbing ditches. The foreshore is perfectly free to strangers; although one proprietor in the island has ventured to dispute the fact. A private grant of the shore was made two hundred years ago, and below the sea-wall no visitor can be considered as a trespasser, while a boat may bring up anywhere in the channel. Canvey is not an inviting spot for camping out. On a gusty night, when the rushes moan and shiver, and the great river sounds hoarsely, it is hardly possible to look out into the darkness without feeling a sense of strangeness and even of fear. The island seems to have no salient points; the hill, topped by the house known as the Hall, rises a little, but it is more like a cloud than like a solid mound. A shadowy figure from the coastguard’s hut sometimes paces up and down, but even this gives none of the refreshment of human companionship. The writer once took refuge in the Channel at midnight during very bad weather. The boatmen did not c are to land, and we sheltered ourselves as best we could from the storm. The island then showed in all its mystery through the drift of rain and the flying haze. It was an experience never to be forgotten ; but no one is recommended to try it. It is better to seek the hospitable shelter of an inn, and put up with rough fare, or any fare, rather than remain in the open amid that abomination of desolation. 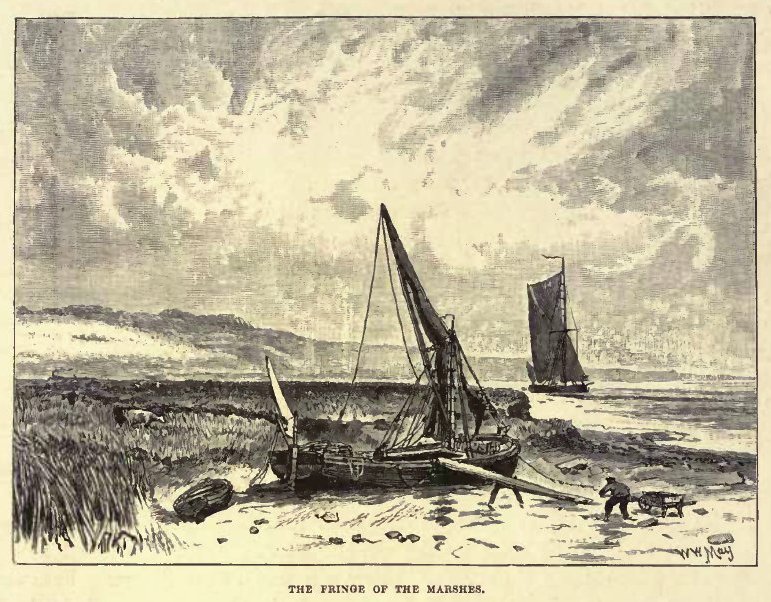 The sea-wind comes with sharp, stirring breath after we pass the long spit that shoots out from the weird island; the river is still yellow, but when the breezes set the foam dancing the crests of the waves are of pure white. 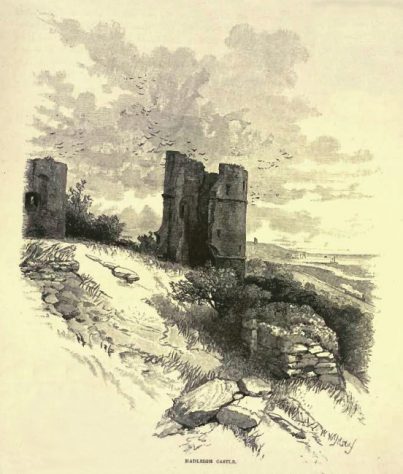