You are here: HomenextArtsnextArtnextRound about Canvey published in the Yachting Weekly 1914

Round about Canvey published in the Yachting Weekly 1914

William Edward Wigfull was born in Sheffield in 1875, the youngest child of William & Ann.  Wigfull lived or had on a houseboat on Benfleet Creek. Wigfull was, professionally, an illustrator – both for newspapers and books and magazines. In the 1901 census he is living with his brother, Joshua, in Battersea. The 1911 census shows him as an artist living in Leamington Spa with his wife, Alice Rhoda Green whom he married in 1903. The couple were living with William’s sister Charlotte and husband Frederick Green, Alice’s brother. Is Charlotte the sister-in-law he mentions below? 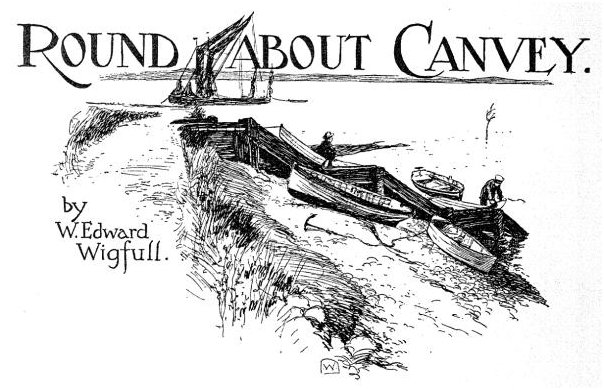 YEARS ago, when I was working for a big London daily newspaper, the Editor one day called into his office a rising journalist and congratulated him on an article he had just written on ” Life in a Destroyer “-it was at the time of the Russo-Japanese War-and finished up by asking him where he had got his facts. Now the journalist, though rising, was very, very young, and he replied, “Facts? I hadn’t any facts.”

Unfortunately for me, the occupant of the editorial chair of the YACHTING MONTHLY not only desires “facts,” but carries his eccentricity as an editor further, by insisting on the facts being actually personal experiences of his contributors. It was in the attempt to gratify this whim that the series of mishaps, here following, occurred; therefore I lay the blame on his shoulders. We determined to “discover” for ourselves the way to Benfleet; many times had we dodged about the entrance, and even hesitatingly penetrated as far as the old oyster watch boat, but not beyond, fearing the hidden mud. So we fixed on a day a week in advance for the venture. When it came it was a dull morning, but with a nice breeze about S.W. By making a good tack straight out from the shore at Leigh, we should be able to fetch up the greater part of the way on the next high tide about 12.30, which would give, a nice sufficiency of water, my boat drawing about 2 ft. 10 ins. I can see the average reader smile, but we measure our draught in inches in this locality. This very day of writing, that two inches lacking of three feet enabled us to creep up to our moorings. 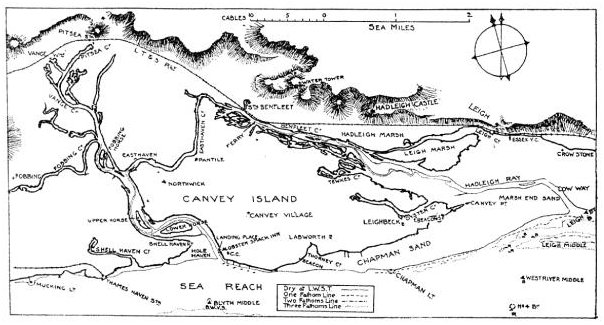 The crew consisted of my wife, sister-in-law, small daughter and myself, and of course, we got away later than we intended. The long tack out came off as per programme, but no sooner were we round on the other, than the wind became westerly, dead ahead. However, we determined to keep on. The first part of the creek is fairly wide, and there was plenty of water, so, carefully sounding with the boathook inshore, we got along very well. As the creek narrowed, the tacks became shorter. “Why don’t you go straight instead Of wiggly-waggling all over the place like this?” asked the junior member, until at last it was not worth while making fast the jib sheets on each board. A barge yacht, the ideal boat for these waters, was beating up ahead of us, and we were gratified to find that each tack brought us nearer to her-in spite of the fact that she could hold on much further inshore. This proved our undoing, for, coming about close under her lee, we held on further than we should in the hopes of clearing ahead at the next meeting. Our boat came round all right, but a little spur of mud, outlying, caught and held us. It was, of course, just on the top of the tide, and, after exhausting all known means of getting her off, we decided to abandon ship. So, after tidying up the gear and laying out the anchor, we piled ourselves and personal luggage into the dinghy and started to row home. Unfortunately the opening of Leigh Creek tempted us. If we could get through, it would save a mile or so. Cautiously we tried-there was plenty of water-until we found the “watershed” was about 200 yards inside, and we could go no further. The water was dropping behind us; it was too late to row the laden boat back. Six feet or so of mud separated the dinghy from the bank, so I prepared to carry the ladies across. This method of debarkation is also one of the common features of yachting in the Thames Estuary, so we were used to it. But, alas! the mud here was much softer than at our moorings, and the weight of the first passenger drove my feet too deeply in for recovering. I lost my balance and fell. Happily the lady-it happened to be my sister-in-law-managed to keep on her feet, and struggled through. Hastily scraping the outer coats of mud off-moments were precious if we did not want to leave the dinghy, too-I placed stones for the others to gain the shore. Then I started to wade back, pushing the boat in front of me. Suddenly I trod in a deep hole and the water came up to my waist before I managed to throw myself across the stern of the dinghy. Of necessity I had to climb aboard; naturally the lunch and our coats were in the stern sheets, so that so soon as I put my knee on the stern, the water out of my high boots emptied itself indiscriminately amongst them. Out again in the main creek, I collected the passengers from the sea wall, and we just managed to save our tide on the moorings. 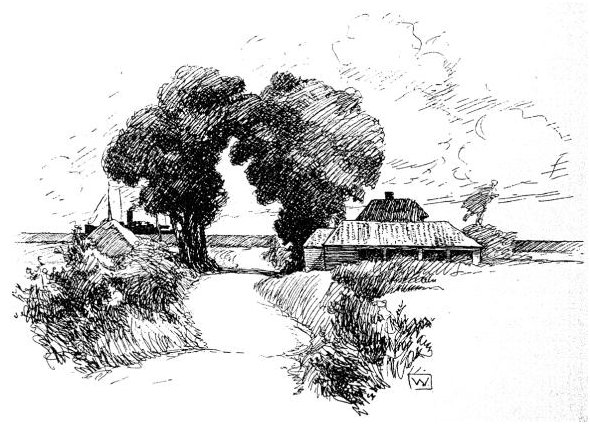 A Canvey Road, looking towards the River.

It will be at once apparent that this district offers to the “ditch crawler” all his joys. The up-river man, anxious to try his luck on tidal waters, will find the creeks at the back of Canvey easy of access, and affording plenty of sheltered water, which he can vary by having quite a considerable “dust up” on occasion in Sea Reach if required. The owner of a big boat can lie comfortably either in Hole Haven or in the Ray off Leigh, whilst making side trips in his dinghy. The stranger anchoring in the Ray should look out for a large “horse” (not marked on the Admiralty chart) that runs up the middle of the lower end, and which dries out about two hours before low water. The bawleys anchor in line at either side of it, and consequently are a good guide as to its position. As will be seen from the map, there are two principal navigations: One from the Ray to Hole Haven, via Benfleet; the other up the creek to Vange with its branch to Fobbing. The first is very popular with local boats, and it is possible with a fair wind to get round the island and back to moorings on the one tide, even in a 12 ft. dinghy.

Starting from Canvey Point, the deep water keeps fairly to the middle, the channel being marked on the starboard hand by tree beacons. This is chiefly for the benefit of barge traffic, and a light draught boat can “borrow,” being considerably on that side. A tree beacon on the port hand marks the end of a spit of mud by the entrance to Tewkes Creek. At this the channel crosses to the north side of the creek and keeps fairly close to that bank for some distance past the Salvation Army cranes, which form a prominent feature in the landscape hereabouts. Leigh Creek joins in behind some islands below the cranes, but has only sufficient water on the top of spring tides for even a small boat. The port bank must be treated with respect, as the saltings are covered at springs, and the width is, inconsequence, very deceptive. Some three hundred yards past the cranes the channel slants across to the south bank, and is very narrow, the mud to starboard being marked with bushes. This continues right to Benfleet. At the Ferry the channel gets into the middle again, bends towards the north bank past the station, and thenceforward keeps fairly to the centre. The “watershed” is a little beyond Benfleet, the tide ebbing through both Hole Haven and the Ray.

Above Benfleet: The Watershed.

Through East Haven Creek the channel continues in the centre, swinging to the outside of the curve round any points in the usual way. Once into Hole Haven there is plenty of water.

Apart from its sheltered waters, the district is well worth a visit. The sea wall on the south side of Canvey divides two worlds. On the one side deep water almost to one’s feet, with the variety of craft from all the world passing up and down; on the other. Rich pastoral land, flat but for the occasional marking of an old sea channel. The fields, ditch divided, are dotted with farmsteads, each with its clump of big trees and black-tarred, thatched sheds.  At Canvey Village, a collection of a few cottages in the centre of the island, stands the pump, practically the sole source of drinking water for the whole.  Consequently it the ‘Lobster Smack’ be ‘run out’, the yachtsman will have considerable exercise in renewing his supplies.  Here also is one of the quaint octagonal Dutch cottages, built in the early seventeenth century.  The building of the sea wall was started in 1621 by Vermuyden, the Dutch engineer, and 4,000 acres of land were enclosed and drained.

Historically the island goes back much farther than that, being known in Roman times, though one wonders what the inhabitants did during ‘high springs’. Hole Haven, with the ‘Lobster Smack’ dating from Elizabethan times, has already been described and charmingly illustrated by Mr Charles Pears in this magazine.  It is sufficient to mention that a small detachment of De Ruyter’s fleet anchored here, whilst the main body were busy working their own sweet will at Chatham, and landed a party who burnt the houses and carried off the cattle.

In the background, the wooded, undulating hills of Essex form a pleasing skyline; the ruined towers of Hadleigh Castle, built by that fine old amateur sea fighter, Hubert de Burgh, in Henry III’s time, stand out prominently. To the left is Rochford Water Tower; to the right Leigh Church tower, under which the tall ships of Elizabeth and the Stuarts anchored in Leigh Roads, then a deep water harbour.  Benfleet, where the ferry and the ‘leppings’ to the mainland are, was the scene of one of Alfred’s victories.  Hasting the Dane landed and built a fort near the spot where the church now stands – this church, by the way, has a very fine porch of carved oak – but the citizens of London, with others, drove him back to Shoeburyness, capturing his wife and daughter, together with his bag and baggage. Little as it appears now, Benfleet was once a thriving port in a very small way, and owned sea-going ships.

The walk up to the top pf the hills beyond is well worth doing.  The whole of the Lower Thames, from Gravesend to the Nore, the Kent shores, and the winding Medway beyond, spreads like a map beneath one’s feet.  That the district offered every convenience for smuggling successfully is obvious, and the sturdy maritime population took every advantage of it.  From Leigh alone nearly a dozen vessels sailed permanently in the trade.  Only a few days ago a long-forgotten cache was unearthed at the Hoy Inn at Benfleet, the contents – sherry – alas, corked! 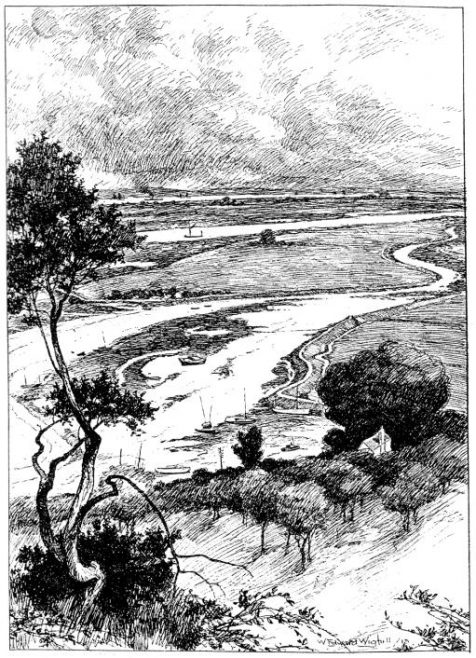 Thank you to Tony Haynes for supplying us with the end of this story.