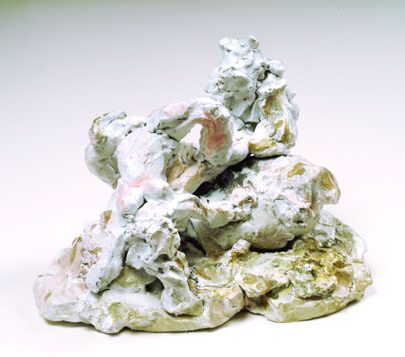 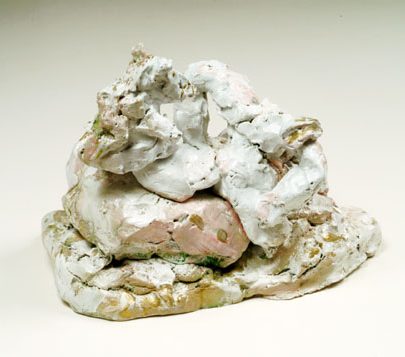 The sculpture was shown at Rebecca Warren’s solo exhibition at the Donald Young Gallery in Chicago between 24 September and 8 November 2003.

The press release from the gallery states… “Warren has gained critical acclaim for her expressive unfired clay sculptures that reference the work of such varied artists as Auguste Rodin, Umberto Boccioni, Edgar Degas and Robert Crumb infused with brazen female sexuality. Of her work Warren has said “I’m unafraid of the potential of my work to sometimes veer towards the grotesque. I suppose it is quite old fashioned in a way, as much as it is contemporary.”

“In the main gallery Warren will exhibit three large scale figures. Like an ancient ring of proto-religious deities they project their vulgarity with an air of gratuitous deformation. Lining the walls will be vitrines which hold a collection of found objects, studio detritus, neon fragments and sculptural doodles. In one sense they act as ethnological displays providing an imagined museological context, while in another they are three dimensional studio sketchbooks.”

“Also on view will be two-dimensional collages which, like the vitrines, are derived from everyday materials that are close to hand. Here they are arranged in a familiar two-dimensional plane, which brings to mind the whole history of 20th century collaging. As with the vitrines, with their traces of clay dust, they establish their lineage with the grander sculptural work. Warren was born in London in 1965 and received degrees from Goldsmith’s College at the University of London and the Chelsea College of Art, London. She has had solo exhibitions at Maureen Paley Interim Art and upcoming exhibitions include a solo show at the Kunsthalle Zürich. Her work is included in the Saatchi Gallery collection and was shown in the exhibition New Labour in 2001. Warren currently lives and works in London.”

Since the exhibition, the artist has been nominated for the 2006 Turner Prize, and in 2009 the Serpentine Gallery exhibited a major solo show of her work.