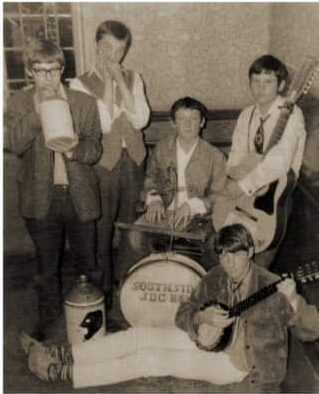 Lew Lewis, a ‘Little Walter-influenced’ Harmonica Player and Vocalist, was born on Canvey Island, and was brought up on the same street as Dr. Feelgood frontman Lee Brilleaux. Indeed, both were members of the ‘Southside Jug Band’ on Canvey, whom also included future Dr Feelgood member John B Sparks (‘Sparko’). Guitarist Dave Higgs joined and they renamed themselves The Fix.

Dave later asked Lew to join an early version of Eddie and The Hot Rods, and Lew appeared on their first two singles, ‘Writing on The Wall’ c/w ‘Crusin’ in The Lincoln’, and ‘Wooly Bully’ c/w ‘Horseplay (Weary of The Schmaltz)’, which were both released on Island Records in 1976. The band’s live performances at the time were said to be amazing, but due to varying differences Lew left the band and released a solo single on Stiff Records in 1977, ‘Boogie on The Street’ c/w ‘Caravan Man’. His most successful single though was the infamous ‘Lucky Seven’ which was again released on Stiff in 1978, and was covered by Dr. Feelgood on their album ‘Sneakin’ Suspicion’. (Discussion of this song can be found in the film ‘Oil City Confidential’).

Under the name of ‘The Lew Lewis Reformer’, Lew recorded the album ‘Save The Wail’ which was released in 1979, on Stiff. The album’s success led to a lot of live work in Europe, especially in France, and also led to an appearance on German TV show ‘Musicladen’. There was also a Lew Lewis fan club set up around this time, whose members were called ‘Lewnatics’. For the next few years Lew’s profile was high, and he guested on several albums including ‘Black and White’ by The Stranglers, Sandinista! by The Clash, and ‘Bottle Up and Go!’ by Wilko Johnson. Indeed Lew made an appearance onstage with The Clash when they played together at The Gaumont (now The Regent), Ipswich on January 14th, 1980.

Following some turbulent years in the late 1980’s/1990’s, including a period of incarceration, the 2000’s saw some CD reissues of Lew’s material, including the 2002 reissue of ‘Save The Wail’. Lew played in a band including Warren Kennedy on Guitar for a gig at The Royal Hotel in Southend in 2005, and in recent years has started playing live more frequently, including a 2011 trip to Japan.