You are here: HomenextAbout CanveynextThe Dutch Connectionnext4 - Dutch to the RescuenextNot Afraid of Wet Feet

Not Afraid of Wet Feet

Streets are named after Meppel and Kollum. 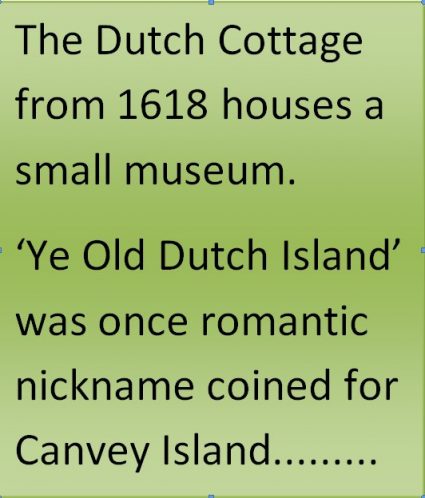 The following article was sent to us recently it was written by a Dutch journalist Bert Wagendorp and published in De Volkskrant, a national newspaper in 1998. The following link will take you to the article. Below is a translation by Agnes van Lowlands who has kindly given us permission to publish it.

“The search for the Dutch history of Canvey Island has a very promising beginning. The bartender at the Lobster Smack Inn taps the pint to the edge and claims that in this very pub, under these same low beams, there have been many evenings when the only spoken language was Dutch. In the seventeenth and eighteenth centuries, fishermen from the Dutch island Texel moored in Hole Haven, on the other side of the dike, and brought eels or came for them. And they of course smuggled; alcohol and tobacco, pretty much the same stuff as today. The man of duty stood by the tap in the Lobster Smack Inn, while they undisturbed, were carrying out the contraband over the dike, so says the barman.

The Lobster Smack at the end of Hole Haven Road is the oldest and most famous building of Canvey Island. A white building is nestling against the new seawall, and parts of it date back to 1510. It was once called Sluice House and Dickens in his Great Expectations called it World’s End. Now, on the other side of the embankment is a large oil depot, so this is no longer the end of the world. When around 1620 the first Dutch set foot here, on this swampy shore, the pub was more than a century old.

There were about three hundred Dutch and they came to reclaim land. A Dutchman, Julius Sludder, already owned parts of the island, but with the rapid growth of London, it seemed promising to invest in fertile soil. Sludder, together with several other landowners came in contact with a rich Dutch merchant, Joas Croppenburg. Croppenburg had to provide capital and labour, in exchange for this he would obtain one third of the reclaimed land. Croppenburg borrowed money in Amsterdam and after the signing the contracts, on February 27, 1623, the work began. ‘The Dutch brought to Canvey Island by Croppenburg were mostly poor wretches” said Geoff Barsby, local amateur historian. “They were slaves of the wealthy Dutch landlords, and came here to work for a pittance. Really rough people.” In the archives of the Dutch Reformed Church in London there is still a letter describing Dutch polder workers as ‘very ferocious and money driven’.

But they DID conquer the sea. They built a seawall, sluices and pumping stations and some of them then settled as farmers in the twelve hundred hectares of new land. Two small buildings remind us of the early days of the Dutch period in Canvey Island, the Dutch Cottages, one in what is still called Dutch Village, near Northwick Corner, and the other one is near a local garden centre. The official story says that the Dutch workers lived in both Cottages. But Geoff Barsby doubts it strongly and has a plausible argument. “Have you ever seen such houses in the Netherlands? No? Me neither.’ According to him, the octagonal shape suggests they were once put down as mill. But when the Dutch were long gone, they were already popularly called “the houses of the Dutch”.

Meanwhile conflict between the Dutch and the English people was brewing. When the English King, Charles I allowed the Dutch to establish their own Dutch Reformed Church, it led to new fighting. The English on the island did not have their own church, and had to make the crossing to South Benfleet every Sunday. On Pentecost Sunday, 1656, the English decided they had had enough of that. They headed to the tiny wooden Dutch Chapel, on the site where St. Katherine’s Church now is, and demanded the key. The Dutch refused, after which, the two groups of Christians began to wrestle and roll down the street. The key stayed for now in Dutch possession. The Dutch Chapel was finally demolished in 1712.

An event of June 1667 destroyed the last bit of sympathy that the English felt for the Dutch. In that month Michiel de Ruyter sailed up the Thames, raided Chatham and burned British war fleet down. His second man, Lieutenant General William Joseph van Gendt, moored on the way back in Hole Haven, at the door of the Lobster Smack Inn, and landed with a group of sailors on Canvey Island. Brutal Dutchmen set several houses and farms on fire, steeling everything that was not nailed down, and terrorizing the British. Then, when the rumours that this raid had taken place at the invitation of its Dutch residents spread – most Hollanders decided it would be healthier to leave, elsewhere in England or back home. Those rumors were never confirmed.

Even during such a short period, the Dutch of Canvey Island did leave traces in the collective memory of the islanders. They were constantly reminded about the rough foreigners by the seawall. That the Dutch were never quite forgotten is evident from the Dutch street names. Meppel Road, Kollum Road, Beveland Road, Sydervelt Road,Linden Road… It would seem that this island has deep Dutch roots, firmly settled in the thick marine clay.

Unfortunately they have little to do with the seventeenth century history: they arose from the wide imagination of Frederick Hester, an entrepreneur from the beginning of the 20th century. Hester was hoping that Canvey Island, thanks to many Londoners gasping for fresh air just around the corner, would develop into an illustrious seaside resort. He bought large tracts of land, especially on the east side of the island, which he broke down into building plots. Not only could the townspeople then build their beach house, they would do it in an area that was renamed by Hester as Ye Olde Dutch Island, the Old Dutch Island. Doesn’t this sound romantic? Nothing would stop this businessman from giving Canvey Island a Dutch image. Through streets with Dutch names paraded his associates dressed in Dutch costumes. In national advertising campaigns was Canvey Island posted as Holland in England. There were even Dutch clogs for sale. Unfortunately, Hester was not rewarded for his promotion of Holland. His megalomania took him under. His plans for the construction of a six square miles large complex of indoor winter gardens, digging canals (with, as was the intention, gondolas) ensured its financial capacity was exceeded. In 1905 he declared bankruptcy.

In February 1953 Canvey Island, now linked to the mainland by a bridge, was hit by the same storm that also claimed many victims in the Dutch province of Zealand. 58 People were killed, ten thousand of the 11 500 residents were made homeless. The Great Tide was the reason for the construction of the new seawall, about a hundred meters behind the Old Dutch dike. And so has the Dutch past of Canvey Island faded.

But, the island never did become truly English; walking on the dike, with the Thames estuary on one side and the lower-lying polders on the other hand, the walker still feels it is a foreign body of the English coast, and it would actually be more in place in the vicinity of the Scheldt. “We are English of course,” says the bartender at the Lobster Smack,”but we are like the Dutch, not afraid of wet feet.” And he claims that in his competitor’s pub in the town centre, the Oysterfleet, the ghost of a seventeenth-century Dutchman is regularly seen, ‘clogs, clothes and all that’…”