You are here: HomenextArtsnextLiteraturenextBooksnextNon-FictionnextMy Holidays on Inland Waterways

My Holidays on Inland Waterways

This is a chapter from Peter Bonthron’s book that was published in 1916, about his boating holidays on his motor boat, Balgonie through the British waterways. The pictures are the actual plates used in the book to illustrate the chapter about Canvey Island.

A Trip To Canvey Island At The Mouth Of The Thames.

WHERE is Canvey Island? Such is the query raised when one is asked concerning this unfrequented old world place, and curiosity led us to pay a visit there.

The man in the street has only a hazy idea of its whereabouts, and anyone who has actually been there is seldom met with: all this notwithstanding that it is within thirty miles of our populous London.

The writer, sailing down the Lower Thames en route to the North by the East Coast steamers, used to conjecture what the conspicuous looking edifice was standing absolutely by itself and showing up so clearly on the coast line. Well, this, as it turns out to be, is the very abode where we find ourselves so comfortably housed on Canvey Island.

The Hotel Kynoch, as it is named, is a pleasant holiday residence, particularly for those who are lovers of the sea and shipping. Facing as it does the River Thames, it commands a veritable panorama of the continuous movements of every description of craft sailing to and from all parts of the world. With good marine glasses, too, one can decipher the names of the different vessels passing up and down the river.

The headquarters of several river yacht clubs are here, and there is no more convenient house of call on the lower estuary. Travelling from London by way of Romford, Brentwood, Billericay, Wickford, Rayleigh, to South Benfleet, we covered a distance of about 41 miles from the Mansion House. At South Benfleet we left the car and ferried across to the island. 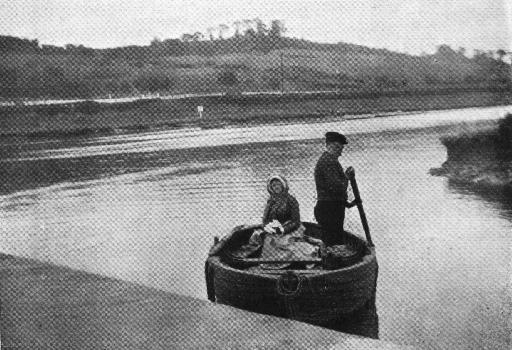 Close to the station we crossed the ferry at full tide in a somewhat crude boat or cobble, to the scene of our explorations.

Canvey Island, situated on the east side of the Essex coast, is thirty-six miles from London Bridge by water, and lies, it might be said, roughly speaking, midway between Gravesend and Southend, and at the last census it had a population of only 300 persons.

The island is some three miles broad by six miles long, and 21 miles round, and is banked up all round by a substantial sea wall, 10ft, to 15ft. above the sea level. This sea wall was constructed by Dutch settlers there in the 16th century, and is a splendid piece of work. Sir Charles Vermuyden was the Dutch engineer, and he was also responsible for the irrigation of the island.

There is also a second wall or breakwater on part of the foreshore on the Thames side a little way from the main dyke, and this is the means of retaining the water, and so avoiding the long stretches of mud so prevalent in other places along the coast. In contrast to these, however, there are several bays close by with fine white sand on the beach.

We traversed the whole circuit of the island on the narrow little pathway on the sea wall, which only just enables one to walk thereon, and although it is somewhat rough at places, we managed fairly comfortably, and so gained an excellent idea of the lie of the land and the surroundings generally. The roadways proper on the island are somewhat primitive, and the motor-car has not found its way there, to stay at least, but the motor boat is becoming more and more in evidence round these shores.

The property, some 4,400 acres in all, is let out for farming purposes, and excellent pasturage and arable land it makes.

The Chapman light, by the way, a well-known sea mark, is situate quite close to the shore on the eastward side where it stands out prominently.

Efforts have been made again and again to develop the island, but, with the exception of some bungalows built for summer residence, everything remains in pretty well its early state.

Some years ago a so-called winter garden, with many small wooden houses attached, and a large building under glass, said to have cost in all some £12,000, was erected close to the Benfleet side, but these structures, with all their attractions, have been doomed to failure, and the place is now a scene of dilapidation and desolation; in fact, it presents a very sorry picture indeed. An electric tram was also built to Leigh Beach, at that time a small fishing village, but this has also shared the misfortune of the larger scheme.

In walking round the island or wall thereof we pass Holehaven, an important coastguard station, where some coastguard officials are stationed on duty to watch the Lower Thames against mythical pirates and smugglers, who have now ceased to exist, although in bygone times, it is said, a profitable clandestine business was carried on. It is an interesting spot, where the men are well housed at their clean and well-appointed station. Kynochtown, where the well-known firm of Messrs. Kynoch carry on an extensive gunpowder business, is just across the water from here on the mainland.

There is an inn I should mention near by – the Lobster Smack – which is near a favourite landing place for yachtsmen and motor boat crews.

Historical information as to the island generally is rather scarce and unreliable, and anything, that is known is more or less of a traditional character. The Danes held sway here, and later on, in the time of Charles II, the Dutch, and there are numerous and distinct traces of the latter still extant.

It is said locally that the Dutch services in the church here were ministered in that language until a few generations back, and there are two peculiar Dutch built cottages now standing, erected in 1621, which give picturesque and interesting evidence of that period. To-day, it may be mentioned, Dutch eel boats come to and moor at Holehaven, this being the only remaining association of the past inhabitants. 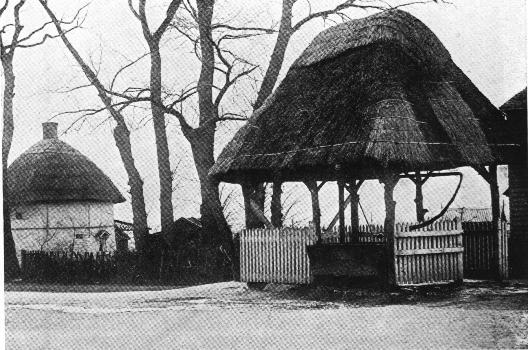 The drinking water on the island is very scarce, but there is in Canvey village an old iron pump which, besides being a landmark, produces exceptionally good water.

It does seem strange that this island, with its easy access and considerable charm of quietude, is so little appreciated – so near Southend and Westcliff, too, with their thousands of visitors – but No! the tourist does not go there, even with all its advantages for the rest cure and health generally. The Englishman prefers to stick to the mainland; he does not brook to recognize the “adjacent isles,” and so Canvey Island in this 20th century is still left severely alone.