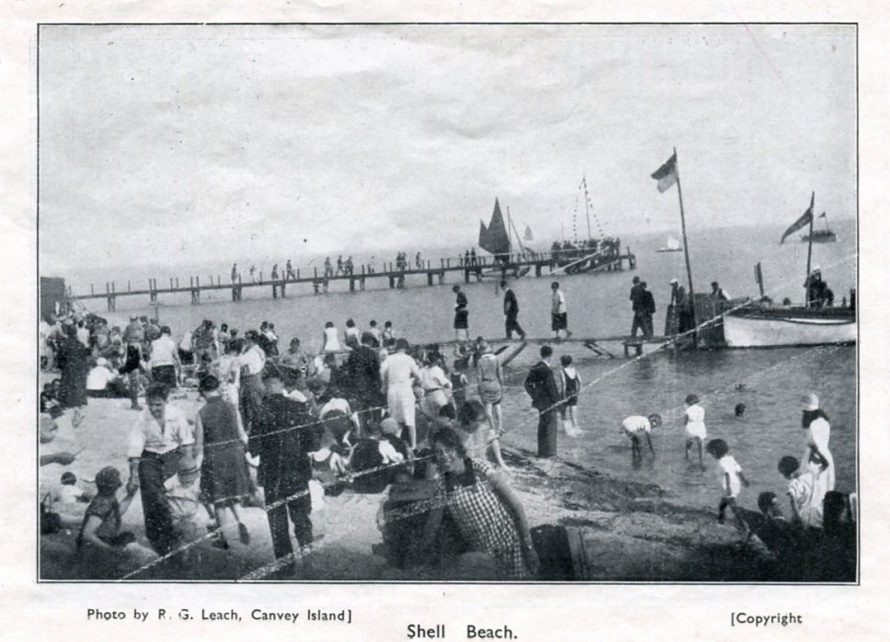 Canvey Island emerges from the trials and troubles of war virtually unscathed, and ready to take its place as one of London’s leading resorts and residential areas. Situated as it is within 50 minutes’ run from London, the Island is in an unparalleled position to provide for the Metropolis a playground, which offers all the natural delights of seaside and country combined with a wide variety of social entertainment.

The reader will find in this Guide a written and pictorial account of all those qualities which have already won wide popularity, and without doubt will, in the years to come, attract many more thousands to this idyllic spot.

Canvey Island, owing to its unique position at the meet­ing place of fresh and salt waters, which continually wash its shores, enjoys a nascent air, which is extraordinarily health-giving and invigorating, and is, indeed, in this respect, possibly above all other places in the kingdom.

Prominent physicians in our leading hospitals pay tribute to the health-giving properties of the Canvey air, by sending patients to this Island in preference to other localities.

Resort of the Future

Twenty years ago a few farms, a few houses scattered in isolation over the Island, and a population of about 500 people, enjoyed the 4,000 and odd acres of Canvey Island, but its wonderful attractiveness and its superlative health-giving air have become widely known, and now it is the site of a strong, flourishing community, and is plainly destined to become one of the most popular health and pleasure resorts in Essex.

In shape an irregular oval, about five miles in length and two-and-a-half miles in greatest breadth, comprising an area of about 4,370 acres of land; 30 of inland and 2,624 of tidal water and 2,031 of foreshore; it is situated in the Thames Estuary and only divided from the Essex mainland on the North by a narrow strip of water called Hadley Ray. This is now spanned by a bridge available for both pedestrian and vehicular traffic.

The bridge is carried on piles, and has its road level at a height that will not be submerged under any known tidal conditions. The free passage of water-borne traffic, up and down the creek, is allowed for by an opening span of the bridge of a clear width of sixty feet, which is negotiated by two movable gangways which meet in the centre, where they are supported by suitable pillars carried on rollers. To open the span, the gangways are moved back by electric power, con­trolled by one man, the rollers travelling horizontally along a prepared bed at the bottom of the creek, whilst the gangways ride over the fixed parts of the bridge. The bridge carries two lines of vehicular traffic to the Ministry of Transport’s stan­dard loading; the width of the carriageway is twenty feet, and of the footway five feet. The total length of the approach is 1,400 feet, and of the bridge itself, 300 feet.

The ceremony of driving in the first pile was performed by the Lord Lieutenant of the County, the late Brigadier-General R. B. Colvin, C.B., on May 21st, 1930, and the bridge was opened to traffic on May 21st, 1931.

Before the opening of the bridge, when the tide was in, the passage of Hadley Ray was made by row boat, ferrymen being on duty at all hours of the day and night to convey passengers across; whilst, when the tide was out, pedestrians could walk across dry-shod, and the bed of the river was sufficiently hard for the heaviest vehicles to cross.

Thus the ” Island” enjoys the unusual distinction of being a ” real ” island twice a day, as with the tide in, it is then undoubtedly a piece of land surrounded by water, whilst, during the remaining hours of each twenty-four, it is a peninsular.

On the Southern side of the Island is the main stream of the Thames, separating Kent from Essex, widening very rapidly here to its mouth, so that the eastern extremity of Canvey (which is Canvey Spit or Point) faces the open sea.

Fifty minutes comfortable run by the London, Midland and Scottish Railway, from Fenchurch Street, lands the visitor at Benfleet Station, where he alights and, in two or three minutes, can be in one of the motor buses which will take him across to the Island, and onward to the Leigh Beck end, nearly 5 miles distant.

Having landed on the Island, the majority of people notice, immediately, that the air is stronger, and with a more marked savour of the sea in it. This statement may seem an exaggeration to one who has not yet visited the Island, but it only requires a visit to experience that it is an actual fact. Even if one comes straight from Southend, or Leigh-on-Sea, directly the Ray is, crossed and one is on the Canvey shore, the difference in the air is noticeable, and it can be observed every time that one arrives on the Island again after even the shortest absence from it

The Secret of Health

The explanation is that Canvey, being surrounded by the sea at each tide, and there being large areas of marsh lands (“saltings,” as they are so descriptively called) which are covered by the sea when the tides are in, the evaporation therefrom, during the time when the tides are out, charges the air with ozone, which is thus constantly being renewed and freshened. This is the grand secret of the wonderful health-giving properties of the Canvey air, and so it can readily be understood why so few other places in the Kingdom can offer such a healthy and invigorating climate.

Sheltered from the North by the hills of Benfleet, Hadleigh and Leigh-on-Sea, with its frontage on the South and East of over three miles to the open river and sea, it escapes much rain that the mainland attracts, and enjoys a very generous share of sunshine. 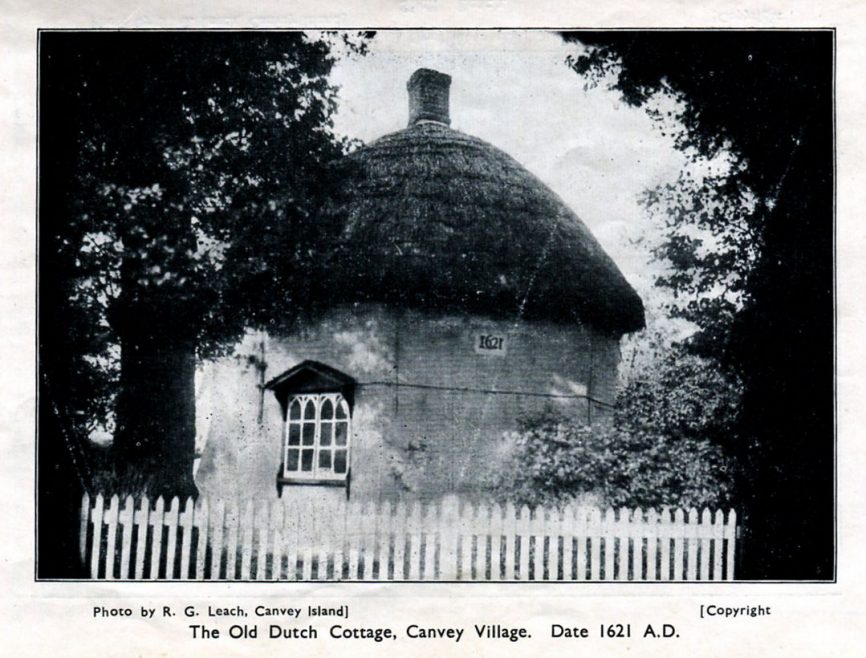 The mud of the creeks and “guts” that abound in the “saltings” surrounding the Island, possesses properties highly beneficial in the treatment of rheumatism, gout and other kin­dred complaints, and the air is extremely healthy, clean and bracing.

The main road traverses the Island from the bridge, and about a mile along this road, on its west side, is one of the two little Dutch houses that still remain as relics of the days when the men from Holland were busy ” inning and recover­ing ” Canvey from the sea. They are octagonal structures, small, but very strong, and compact in appearance, and sur­rounded by their little enclosures of land, they present quaint pictures of the Canvey homes of three hundred years ago. The date on this cottage is 1618, and on the other one, which is in Canvey village, 1621.

A couple of hundred yards further along, the road to the right leads to Northwick, while to the left is the direction for Canvey Village. A walk to Northwick is well worth while on a summer’s day, as this part of the Island is still unbuilt on, and is delightful, quiet country, with one or two farms scattered here and there, and the shores of Hole and East Haven Creeks at the end of the ramble. Until quite recent years, Canvey was noted for its plentiful and varied wild-bird life, but, as human habitations have increased, the feathered songsters have, perforce, deserted some of their old haunts, but there are still many spots on the Island where the song of the lark can be enjoyed, and the habits of many varieties of beautiful birds and field life can be observed.

Taking the main road, just before entering the village, there is, on the left, the Parish Church of St. Katharine, and, opposite, the old village school which served the requirements of the Island until 1924, when the new school was built on Long Road.

Following the road to the right through the village, passing the old Dutch Cottage dated 1621, and, a little further, on the opposite side of the road, the Vicarage, after about another half-mile, is seen, on the left, the former Kynoch’s Hotel, boldly standing up above the sea-wall, while clustered round are the more modern shapes of oil storage tanks. At this spot the sea-wall is at its strongest part, being some sixty feet wide at its base with a promenade along the top about fifteen feet in width. This is Hole Haven, still a well patron­ised yachting centre, with deep water.

East side of the Island it provides a promenade of three miles by the shore, and this is at all times an interesting walk, with extensive views of Island on the one hand and on the other, of the mouth of the river, bordered in the distance by the wooded hills of the Kent shore.

The Chapman Light, in the fairway of the river, is 800 yards from the shore, due South-East. It was opened in 1851.

The traffic on the face of the water is always far more interesting than at most sea-side resorts. Whilst at the majority of places by the sea ships pass at a distance almost beyond the ken of the naked eye, from the beach and sea­wall of Canvey there is never a moment of the day when ships and boats are not comfortably visible, ploughing their lonely furrows through the waters, as all the vessels homeward or outward bound to and from the large ports on the Thames, must pass by Canvey, and thus a constant procession of vessels of all sizes can be watched with interest and pleasure. Monster ocean-going liners bound for the other side of the world (fascinating spectacles at night as they majestically glide past with their tiers of lights streaming out and giving them the appearance of floating towns); sailing vessels with their full rig of canvas spread, and, as the sun catches the sails, delight­ing the eye with one of the most haunting sights to be imagined; red and brown sailed barges ” tacking ” to catch the breeze; fishing boats and pleasure yachts—the Estuary teems with interest at all times. Here one can also realise that despite the progress of motor and steam in water travel there still remain a few ocean-going vessels under sail only.