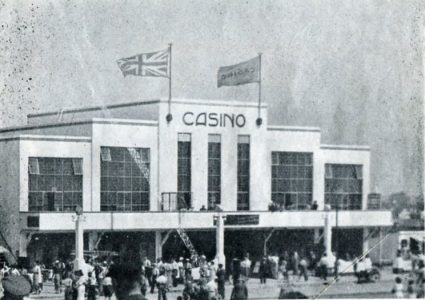 Whether visiting or a permanent resident on the Island, Canvey can provide for most interests and tastes, and no one need ever be at a loss for something interesting and absorbing to do.

The bathing is excellent. There is a long clean stretch of beach composed of natural powdered shell, which, as it slopes gradually, is perfectly safe, and a paradise for children and adults alike.

For the less energetic, a deck chair on Shell Beach or a seat on the sea wall, puts one in an ideal position for lazy sunbathing, whilst watching the ever-changing panorama of the ships going by.

Good angling sport can be obtained in the creeks, and the more ambitious are within easy reach of excellent fishing grounds out at sea.

Shrimping is an interesting and healthy pastime which can be indulged in with every prospect of a good haul. And when the tide is out, a clamber over the rocks in some parts produces a rich harvest of mussels and winkles.

There are two centres of yachting on the Island. In the south is Hole Haven, an anchorage known to most Thames yachting enthusiasts, while on the North side of the Island the Benfleet Yacht Club have their headquarters on the Ray. close to Benfleet Station.

For the gardening enthusiast, a walk round the residential areas of the Island will give him many a delightful hour, admiring the trim, well-kept gardens, gay with bright flowers and luxurious growths. The heavy clay soil of the Island, while requiring much heavy work in its initial cultivation, brings a rich reward in the magnificent horticultural specimens that are produced.

Within easy distance of Canvey Island are a number of interesting places, both from the historic and scenic points of view, and many a fine ramble can be enjoyed in country which in contrast to Canvey offers many a fine view and hilly landscape.

Taking a ‘bus to Benfleet one can saunter through that quaint old village to the ancient Parish Church of St. Mary the Virgin, and, proceeding through the Churchyard and emerging into the road, turn to the left and follow the road a couple of hundred yards, there turning off to the right up Vicarage Hill.

When nearing the tall brick tower on his right (Hadleigh Water Tower), let him direct his gaze more often to his right than his left, and he will, every now and again, obtain glimpses of the Estuary, until, arriving at a point just before reaching the Water Tower, his eyes will dwell upon such a splendid panoramic view of Canvey Island as will linger in his memory for many a year.

The bold, broad expanse of green hillside sweeping down­wards, then the narrow silvery band of water between the Essex mainland and Canvey, the flat, almost oval shaped Island, plentifully besprinkled with bungalows yet still dis­closing many a broad acre of farm and grazing land, the sea­wall standing out boldly encircling the Island with its strong protecting clasp; beyond that, the now rapidly widening mouth of the Thames, the outstanding, spider-legged Chap­man Light, looking to be within arm’s reach of the sea-wall, although, in reality, a half-mile from it; the fairway of the river bearing its perpetual traffic of inward and outward bound ships; on the farther side the Kentish shore, seemingly culti­vated to the water’s edge, and rising gently to tree topped ridges—this is the magnificent prospect which is unfolded on a fine day to the admiring gaze.

There are many places of interest on the mainland within easy reach, and a few particulars of some are given in the follow­ing list: —

Canewdon. An historical old village four miles from Rochford. Commands fine views over the River Crouch and the site of the battle of Ashingon, where Canute the Great and Edmund Ironside fought in 1016. Site of a Danish entrenchment. The ancient Church of St. Nicholas with the quartered arms of France and England, and the shields of Bohun, Mowbray and Warren.

Hadleigh. 21 miles from S. Benfleet station. Stone church of St. James the Less dates from the time of King Stephen (1135-1154). Remains of Hadleigh Castle, first built by Hubert de Burgh, Earl of Kent, in the reign of Henry III. The Salvation Army Colony is now at Hadleigh.

Rayleigh. 41 miles from S. Benfleet station. A very old church. Holy Trinity. Remains of a castle built in the 11th century by Sweyne. the founder of the Dc Essex family.

Rochford. 4 miles north of Southend. Beautiful avenue, over a mile long of elm and oak trees. Old Church of St. Andrew. The Lawless or Whispering Court” was in olden times held in this district. It was a tribunal established in pursuance of a singular manorial tenure, and was held in the open air on King’s Hill, on the midnight of the first Wednesday after Old Michaelmas Day, between midnight and cockcrowing. The whole business was conducted in whispers, and the minutes made with a piece of charcoal instead of pen and ink. A market for the sale of general produce is held at Rochford each Thursday.

S. Benfleet. Old parish church of St. Mary the Virgin. West Doorway is a good specimen of Norman architecture. Has a peal of five bells; the tenor weighs nearly 20 cwt. and was cast in 1636. and the treble is dated 1664. Register dates from 1573.

Stanford-le-Hope. The Church of St. Margaret is very ancient and interesting. Shows examples of various styles of archi­tecture—Early English. Norman. Perpendicular and Decorated, and some excellent oak screen work.

Wickford. A village existed here of the same name in the time of Edward the Confessor.   A market is held once a week for the sale of general produce.