Canvey Island as a Residential Centre

From the 1931 Canvey Island Guide

Canvey may boast of a unique combination of attractions such as, possibly, no other district is favoured with, and which endows it with every feature of a desirable residential locality.

Its accessibility from London; its enviable geographical situation in the mouth of the Thames, so easily reached from the Essex mainland and with such splendid open views of the sea at the South-Eastern end of the Island; its quaint character of scenery, unlike almost any other English landscape and with a  charm peculiarly its own, which soon begins to exercise that undoubted fascination which has inspired the title of this guide as it really does captivate the majority of visitors and instils into then the desire to make an enduring acquaintance with the Island; and, above all, the wonderful, health-giving and invigorating sea air, richly laden with ozone, recuperating the weak and refreshing the town-wearied,  these are only some of the many qualities which destine Canvey to develop into a favourite residential spot. 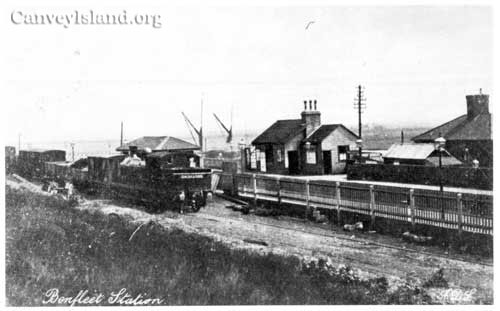 Only 29 miles from the heart of the City of London, Canvey is London’s, nearest seaside. The railway station is Benfleet on the London, Midland and Scottish Railway, and an excellent and frequent service of trains gives convenient connection with all parts of the Metropolis. Indeed, Canvey can be reached from the City in as short a time as many of the outer suburbs of London and at very little more cost of travelling, whilst after leaving Barking the traveller has emerged from the bricks and mortar of the largest city in the world and his journey is through the fair fields and countryside of Essex, in itself a daily tonic to the worker who has been “cribb’d, cabin’d and confined” within the artificial surroundings of the great town all the day. Thus the tired city worker is offered the immense opportunity of settling his family by the seaside; of himself, sleeping each night in an air that is second to none other in the kingdom for invigorating and health-renewing properties, and of spending his week-ends in a delightful and bracing spot by the sea.

In the following pages is given some useful, practical in­formation to assist would-be residents to choose their land, and building.

Although the Island has developed with most remarkable ra­pidity during the last few years, as may be appreciated from, the records of population and of buildings which are quoted further on in this article, there is still plenty of room for far greater increase, and most desirable building sites can be obtained at prices to suit all purses, and in all parts of the Island. To start with, a careful perusal of the local land agents’ and builders’ announcements in this guide will give interested readers a useful idea of whom to apply to for fuller particulars and from these announcements alone a very compreh­ensive selection of sites, bungalows and houses can be-obtained which will provide the data for a pleasant visit to Canvey to look round for one’s self. 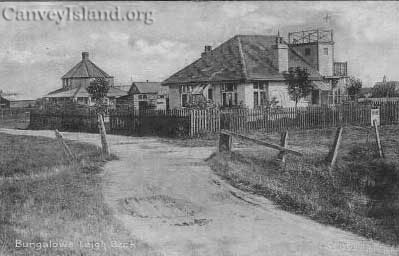 On first acquaintance the visitor will at once be attract­ed by the great variety of designs shown by the buildings. The explanation of this diversity is that for the first few years of the Island’s more rapid development, the restrictions upon types and values of bungalows and houses, which are usually observed in developing districts, were entirely absent, and the consequence was that large and small bungalows, the designs of qualified architects and those of amateurs fired with the ambition of designing (and even building) their own houses, were scattered over the Island without any controlling superv­ision or planning as a whole. Whilst the unconventionality and unusual freedom of such methods will commend themselves to many, and there are still large areas where the same-free choice of styles can be continued without let or hindrance, it may also be pointed out that the Island has now reached a stage where more regularity is observed on some estates and a more substantial class of structure is offered to those desiring it.  In fact there is practically no limit to choice; those who wa­nt commodious residences with sufficient land for gardens, tenn­is courts and garages, and who also desire the feeling of security of value by knowing that their properties will not be depreciated through smaller houses being erected next to them, have a wide choice of estates where such restrictions are observed while those to whom such considerations do not appeal have Plenty of sites to select from on estates where no restr­ictions whatever of this nature apply.

The area of the usual plot of land on Canvey is 900 square feet (15 feet by 60 feet), and, thus, the smallest piece of land on which a habitation can be built to conform with the local Building Bye-laws and Regulations, is a site equal to four Canvey plots. A copy of the local Building Bye-Laws and Regulations can be obtained from the Clerk to the Canvey Island Urban District Council at the Council Offices, Canvey Island and it may here be remarked that it should be to the decided advantage of the intending settler to have his building work carried out by one of the local builders, who will be well ac­quainted with the Council’s requirements and thus able to save the time and trouble which might easily be wasted by contract­ors from outside the locality who may not be conversant with the particular routine relevant to the place. Moreover, it is only reasonable to suppose that a builder with considerable practical experience of erecting bungalows on the Island, should be able to give more satisfaction in price and quality than one without this special local experience and organisation. 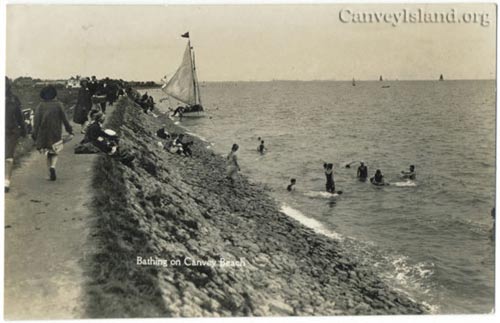 The price of land, of course, varies according to position In some parts of the Island land can still be obtained at as low as £6 a plot, while, in the best parts, the prices are considerably higher, but it can be safely asserted that, if the population of the Island only continues to grow as steadily as it has done during the past few years, the present prices will certainly appreciate year by year, while, with the scheme of development which the Urban District Council have in view there is great possibility of the increase in value of land proceeding far more rapidly even than the public envisage at the present day.

The two chief factors which are calculated to accelerate the already tepid pane of development of Canvey Island are, a bridge to connect the island with the mainland, and a good road across the Island.

The first Urban District Council very quickly took in hand the formidable task of reconstructing and widening the exist­ing road over the whole of its length, and providing a good, durable carriage-way with side walks for pedestrians, so that we now have a twenty-foot concrete carriage-way, built in the latest methods of road construction, and a six-foot path on each side.