End Of A Wall 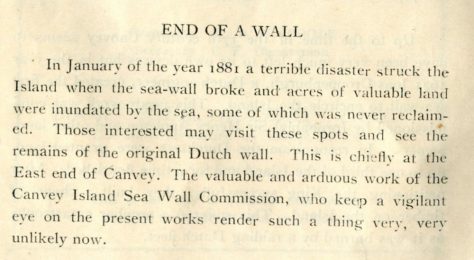 In January of the year 1881 a terrible disaster struck the Island when the sea-wall broke and acres of valuable land were inundated by the sea, some of which was never reclaimed. Those interested may visit these spots and see the remains of the original Dutch wall. This is chiefly at the East end of Canvey. The valuable and arduous work of the Canvey Island Sea Wall Commission, who keep a vigilant eye on the present works render such a thing very, very unlikely now.