The Church, Barefist fighting and smuggling 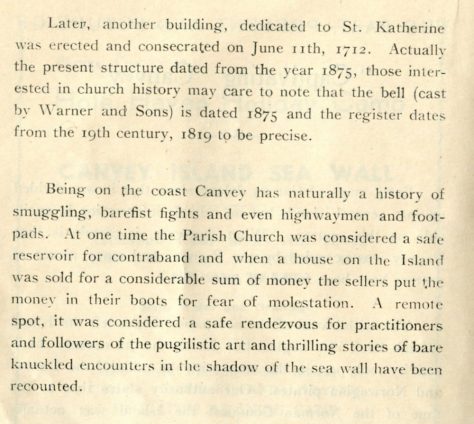 Later, another building, dedicated to St. Catherine was erected and consecrated on June 11th, 1712. Actually the present structure dated from the year 1875, those inter­ested in church history may care to note that the bell (cast by Warner and Sons) is dated 1875 and the register dates from the 19th century, 1819 to be precise.

Being on the coast Canvey has naturally a history of smuggling, barefist fights and even highwaymen and foot­pads. At one time the Parish Church was considered a safe reservoir for contraband and when a house on the Island was sold for a considerable sum of money the sellers put the money in their boots for fear of molestation. A remote spot, it was considered a safe rendezvous for practitioners and followers of the pugilistic art and thrilling stories of bare knuckled encounters in the shadow of the sea wall have been recounted.