A Concise Guide To Canvey Island 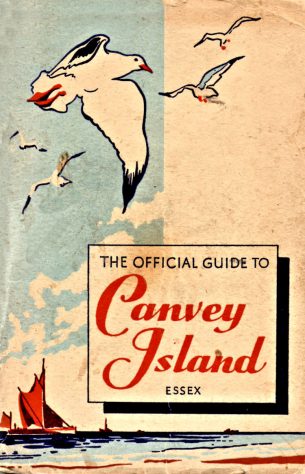 The first post-War holiday year at Canvey proved that the Island had not lost its popularity with Londoners, especially those who, after bearing the brunt of various blitzes, at last had an opportunity of seeking quiet and a serene and invigorating air.

Happily the damage wrought by enemy action on the Island itself was comparatively slight, but the most optimistic could not hope that after years of frustration, irritating restrictions and soaring prices, things could be quite the same as they were before.

Somewhat painful reminders of changed conditions are the increase in railway fares and rates.

This Guide, however, appears at a time when, in many directions, conditions have returned to normal, and there is little doubt that the area is growing in attractiveness, both from the holiday maker’s and the resident’s point of view.

A Glance At The Past.

Away to the south and west of Leigh used to stretch great marshes, flat and tree less, with a maze of creeks winding in and out among the islets.

A few miles of this wild wind-swept marshland were reclaimed in the reign of James l. by the famous Dutch engineer Sir Cornelius Vermuyden, the tract he encircled by his sea-wall being known as Carney Island, which retains a Dutch atmosphere to this day.

The links of friendship between the British and Dutch peoples have been welded closer than ever, as witness the frequent interchange of visits by sporting and other deputations.

Even thirty years ago it was true to say that the Dutch seemed to feel at home on Canvey Island, for the little harbour of Holehaven at the south-west corner was the anchorage of many Dutch eel-boats plying in the Thames Estuary.

Long before that, the Thames Mouth had its own race of smugglers who found the winding creeks and deep gullies extremely convenient.

On Canvey. behind and below the Dyke on the south, stands an historic Inn, its chimneys just peering over as if to see if the Protective men are about. Well it might in the “bad old days,” for it was once a favourite place of call for smugglers and desperate river thieves. Close by is the Coastguard Station, placed there for the very purpose of keeping this Inn “under observation.”

But contraband, in these days, is merely a name, and if wizened watermen are heard talking of “crops” and “runs” you may gather that they are yarning of their youthful memories.

Anyway, this is just a hint that if you get on the right side of Canvey’s “oldest inhabitants” you will acquire some out-of-the-way information about times and customs long since passed away. 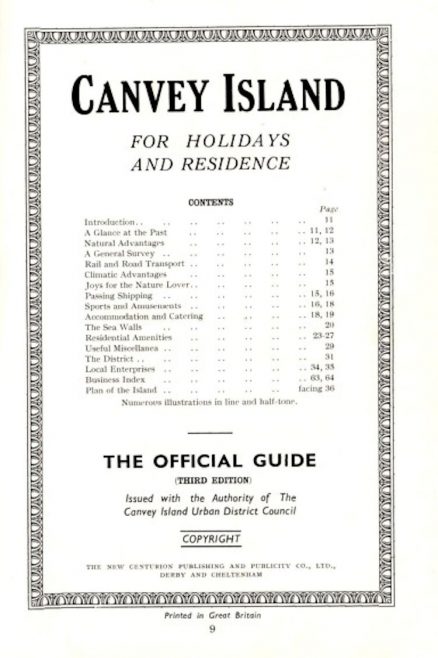 Although developments have taken place at this resort in recent years, it is still in the “growing” stage, and there is ample scope for further development.

The greatest asset of Canvey Island is its invigorating air, the secret of which has been explained as follows:

“Canvey being surrounded by the sea at each tide and there being large areas of marsh-lands (“ saltings ” is the correct word for these) which are covered when the tides are in, the evaporation therefrom during the ebb charges the air with ozone, which is thus constantly being renewed.”

Furthermore, it has been remarked that the mud of the creeks that abound in the “saltings” possesses properties highly beneficial in the treatment of gout, rheumatism and kindred ailments.

Anyway, what we want to emphasise is that our attractions are chiefly of the “natural” variety.

In the following pages we shall tell you of various amenities and amusements, but, when booking for Canvey Island, bear in mind you are going to visit a resort that, in many respects, is quite unique.

In short, do not expect a Brighton or a Blackpool, but simply a resort quite unconventional, very friendly, and very anxious that you should benefit both in mind, body and estate.

We will now come down to essentials, and tell you all you really want to know about this wonderful Island.

Canvev Island, in the Thames Estuary, and separated from the Essex mainland by a narrow strip of water called Hadleigh Ray. which is crossed by a substantial Bridge, is about five miles in length by two and a half miles in width. Its total area of over 4,000 acres has been broken up into various building estates, and main roads have been and are being constructed.

On the north is Benfleet Creek; on the south, between Canvey Point and the Lobster Smack Inn are the various roads and houses of Leigh Beck ; Shell Beach, looking towards the Chapman Lighthouse, Thorny Creek, and Deadman’s Point.

On the south-west are Hole Haven, the Islands curiously named Lower Horse and Upper Horse, Holehaven Creek and Easthaven Creek. On the east, between Canvey Point and the Benfleet Creek Saltings, are Small Gains Creek. New Lands, and a sunken Marsh. Nearly in the centre of the Island is the original Canvey Village.

How To Reach Us.

The nearest Station to Canvey Island is Benfleet, which is 29 miles from London on the L.M.S.R. main line to Southend through Barking Dagenham, Hornchurch, Upminster, East Horndon, Laindon and Pitsea. From Fenchurch Street Station the distance is covered within an hour. The services both ways are good, and business men in particular appreciate the numerous evening trains, from London.

Cheap tickets (single fare for return journey) are obtainable daily from Benfleet to London and Southend, and Season Tickets (first and third class) are issued between Benfleet and London: consult Railway Officials. 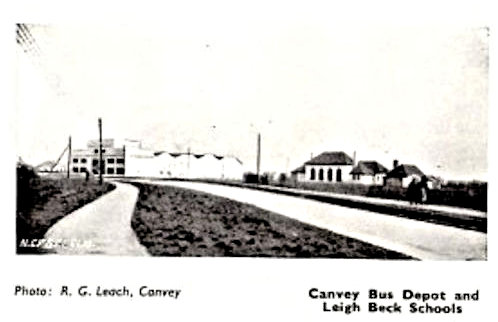 Saloon Buses belonging to the Canvey and District Motor Transport Company Ltd. meet all the principal trains arriving at or departing from Benfleet Station.

The Company’s Services are maintained throughout the day from as early as 5.40 a.m. The run from Leigh Beck Farm at the eastern end of the Island to Benfleet takes about eighteen minutes, there being ample con­venient stopping places en route.

Three minute services in the Summer, twenty minutes in the Winter.