You are here: HomenextArtsnextLiteraturenextDirectories and GazetteersnextGazetteersnextA Topographical Dictionary of England. 4 Volumes

A Topographical Dictionary of England. 4 Volumes

by Samuel Lewis originally published in 1831 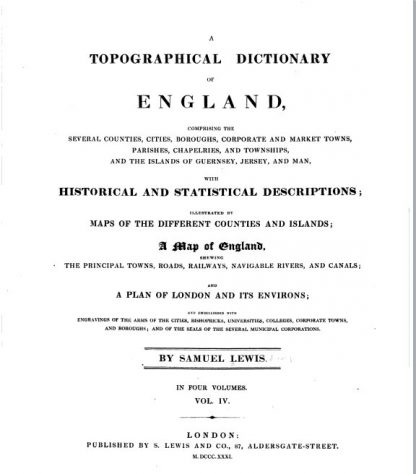 Samuel Lewis (1782/3-1865) was a publisher with a business in Aldersgate Street, Hatton Garden in London.  He is the publisher of series of British topographical dictionaries and atlases.  The first in the series was ‘A Topographical Dictionary of England with Maps and a Plan of London’ which consisted of 4 volumes plus the atlas and was published in 1831.  The series continued with similar dictionaries for Wales, Ireland and Scotland.  Samuel and later is son also called Samuel made contributions to some of the later series.

Not a lot is known of Lewis’s private life except he was married and had at least one son, Samuel, and one daughter, Eliza. Samuel Lewis died at his home, 19 Compton Terrace, Islington, London, on 28 February 1865, aged eighty-two.

Canvey is mentioned four times, including the actual entry for Canvey and I have included all of them here because they will be of interest. 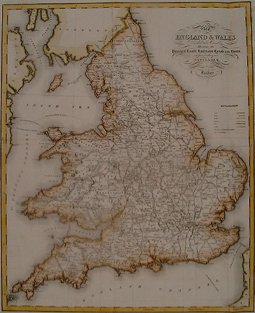 Map of England and Wales Divided Into Counties Showing the Principal Roads, Railways, Canals & the Rivers as far as they are navigable

Volume 3 page 59
LEIGH, a parish and sea-port in the hundred of ROCHFORD, county of ESSEX, 17½ miles (S.E. by S.) from Chelmsford, containing 905 inhabitants. The living is a rectory, in the archdeaconry of Essex, and diocese of London, rated in the king’s books at £15, and in the patronage of the Bishop of London. The church is dedicated to St. Clement.

There is a place of worship for Wesleyan Methodists. This parish borders upon the Thames, and includes an island called Leigh [p.59] Marsh, with the east end of Canvey island, and the famous oyster creek there. In a hollow near the Thames is a small custom-house. About the year 1765, a quantity of Roman coins was discovered, on the fall of a cliff after heavy rain.

Several small islands in the German ocean and the æstuary of the Thames are included within the limits of this county: the first and most valuable, to the southeast, is the island of Mersea, eight or ten miles south of Colchester, between the mouths of the rivers Colne and Blackwater, a rich and fertile spot, about five miles from east to west, and two from north to south. 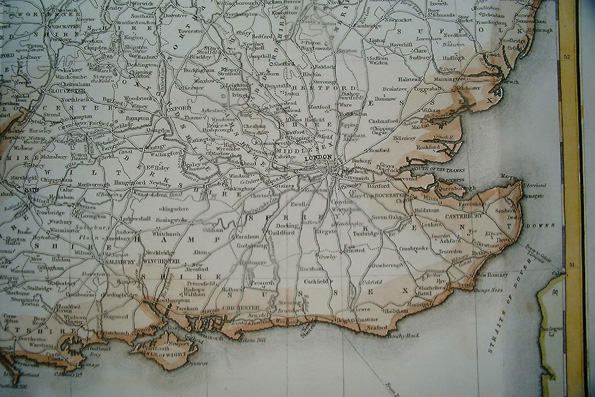 The islands towards the south, in the hundred of Rochford, are, Foulness, Wallasea, Potten, Havengore, and New England, lying contiguous to each other, and bounded to the north by the Crouch river; to the east and south-east by the German ocean; and to the west by the continental part of the hundred of Rochford; being about four or five miles from the town of Rochford. The remaining island, towards the south-west, is Canvey Isle, which is in nine several parishes; it is surrounded by branches of the river Thames, and situated nearly at its mouth. The most beautiful part of Essex, without the addition of a river, is in the liberty of Havering-atte-Bower. From Romford to Brentwood is a fine country; but the more striking scenes are not within view of the road. From Thorndon to Epping is all nearly of the same description, exhibiting a perpetual variety of hill and dale, thickly wooded, with gentlemen’s houses interspersed in every direction. Between Hockley and Rayleigh there is a beautiful view of a richly cultivated and well wooded vale, terminated by high grounds in the distance. Langdon Hills command the most extensive and the finest prospect in the county: the Thames is distinctly seen for several miles, and the distant hills of Kent bound the view with an interesting outline. Danbury is the highest ground in the county, and commands a striking view, but not equal to that from Langdon Hills. The high lands at Purfleet, formed by a chalk cliff projecting toward the Thames, without the intervention of marsh, present an animating scene not common on the Essex side of that river, the bustle of the shipping being agreeably relieved by the rural features of the landscape. The vale on the northern verge of the county, through which the river Stour flows, has great variety in breadth and features; and the bounding hills offer in all directions rich scenes of cultivation. The climate is generally mild; but part of the eastern and southern limits of the county, for ten or twelve miles from the sea and the river Thames, in the hundreds of Thurstable, Dengie, Rochford, Barstable, and Chafford, are subject, during the autumnal months, to thick and noisome fogs, which are often productive of quartan agues. The draining of marshes and the highly improved cultivation of the lands, however, have greatly abated this evil.

Map of Essex from Lewis’ Atlas

CORRINGHAM, a parish in the hundred of BARSTABLE, county of ESSEX, 3 miles (E.) from Horndon on the Hill, containing 235 inhabitants. The living is a rectory, in the archdeaconry of Essex, and diocese of London, rated in the king’s books at £22. 13. 4. The Rev. W. R. Stephenson was patron in 1822. The church, dedicated to St. Mary, has a tower apparently Norman, with two tiers of plain round arches; at the upper end are some pierced windows, and a low wooden spire. This parish is situated between Tilbury Fort and Canvey Island, and is bounded on the south by the Thames.

CANVEY – ISLAND, a chapelry, partly in the parishes of NORTH and SOUTH BENFLEET, BOWERS, GIFFORD, LAINDON, PITSEA, and VANGE, in the hundred of BARSTABLE, and partly in the parishes of LEIGH, PRETTLEWELL, and SOUTHCHURCH, in the hundred of ROCHFORD, county of ESSEX, 6¼ miles (E.N.E.) from Leigh. The living is a perpetual curacy, in the archdeaconry of Essex, and diocese of London, endowed with £800 royal bounty, and in the patronage of the Rector of Laindon. The chapel is dedicated to St. Catherine. This island, situated near the mouth of the Thames, is about five miles in length and two in breadth, and contains three thousand six hundred acres: it is encompassed by branches of that river, but there is a passage over the strand at low water, the river being on the south side two miles wide. Numerous flocks of sheep feed here, though the low grounds are subject to inundations, one of which spread so suddenly, in 1735, that many of the sheep and other animals were drowned before they could be driven to the high grounds. Several of the inhabitants are engaged in the fishery. A fair is held on the 25th of June.