A Modern Holiday Centre with A Historic Background

Written by Fred McCave before the floods of 1953 and published in the Essex Countryside Magazine in Spring of that year gives some indication of life on post-war Canvey Island before the place was changed forever. 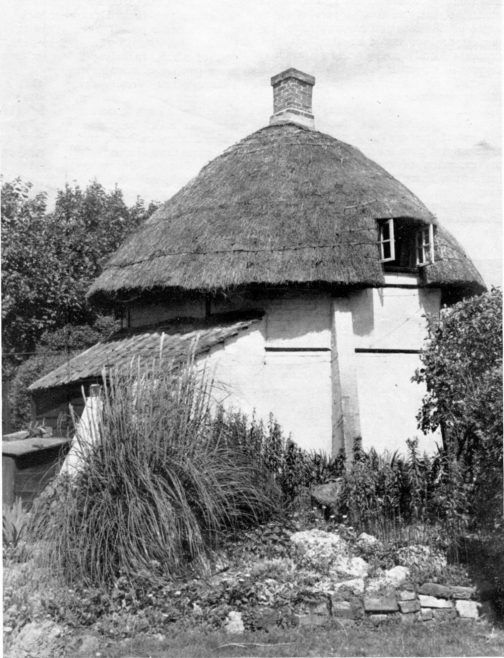 One of the old Dutch cottages at Canvey Island. Built in the seventeenth century, it is octagonal in shape and with its thatched roof attracts the eye of the holiday maker and resident. It is still lived in.

“London’s playground” used to be the title of Canvey Island, 30 miles from Fenchurch Street station. Now a new name has been coined for it by 46-year-old Lieut.-Col. H. P. Fielder, T.D., a member of the Urban District Council. Col. Fielder, who started Thorney Bay Beach Camp, said the other day: Canvey is becoming known in London as the ‘Working Man’s Riviera.’ To prove it, between 7,000 and 8,000 people stayed at the camp over the August holidays.

How this new resort came into being is an interesting story. Back in the seven­teenth century Dutch pioneers came to Canvey and, by building the original sea­wall, reclaimed the island from the maraud­ing waters of the Thames which used to flood it. Traces of Dutch occupation still remain, for there are two thatched, oc­tagonal cottages, one dated 1618 and the other 1621, still standing. A third cottage was burnt down. One of the remaining cot­tages has been given to Canvey Council. It has been suggested that it might be used as a local museum. Dutch place-names— Tilberg Road, Haarlem Road, Van Diemans Pass—abound. The island’s parish church has Dutch connections. Dutch workers asked the King to allow them to worship in their own language in 1628. A wooden chapel was built and when it became unfit another followed. In 1745 a church was built and consecrated accord­ing to the rites of the Church of England.

Houses were plundered and small boats taken from Canvey during the second Dutch war when a party from Dutch ves­sels landed against Admiral de Ruyter’s orders. After an inquiry they were pun­ished. 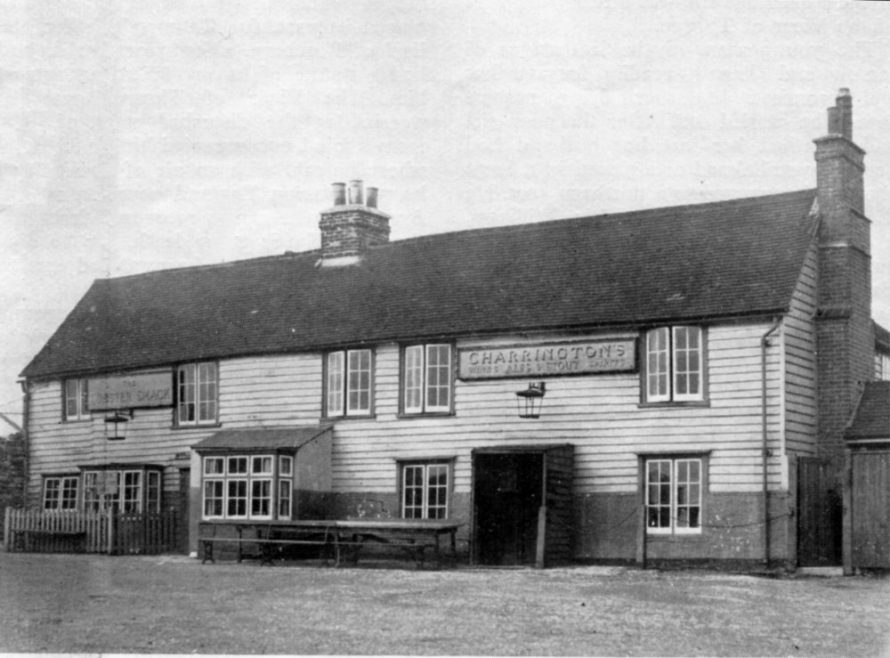 A permanent reminder of the “good old days” at Canvey Island is The Lobster Smack, licensed in 1563, at Hole Haven. A favourite rendezvous for yachtsmen, it has an air of romance. Those visiting it can savour, nostalgically, the memories of “good runs” by smugglers, the days of bare-knuckle bruising and the fast ” clipperty-clop” of a hard-pressed highwayman’s horse.

The parish church was once used for hiding contraband. More peacefully, Canvey was a centre for cheese making. Originally there were eight dairies for this industry. An annual fair used to be another attraction.

Mention must be made of the island’s haunted house, said to have been inhabited at one time by two old men. One was “a true believer in the Christian faith” and the other an “unbeliever.” The Christian said that if he died first he would return to his friend and convince him of life after death. He did die first, and one stormy night a peculiar noise aroused the survivor, who went to the door and opened it but could see nothing. A cat who had followed him gave a sign of recognition and started purring and rubbing itself against—no­thing ! When the building was pulled down a secret chamber, containing the rusted remains of horse pistols and a few old but­tons, was discovered.

At the beginning of the twentieth cen­tury large-scale development took place for a short time. A mono-rail, a vast glass house and seaside amenities made their appearance, but only for a short time, and at the outbreak of World War I Canvey was still rural.

After the war houses were built on a large scale. Some indication is given by these population figures : 1851, 111 ; 1911, 583; 1921, 1,795; 1924, 3,000; 1938, 6,579; 1951, 11,215. On April 1, 1926, Canvey became an urban district and in 1931 a bridge joining the island to the mainland was opened. Prior to this a ferry and step­ping stones (now erected in front of the council offices) were in use. Housing estates, shops, main drainage and other facilities were provided and Canvey was progressing well until World War II. Can­vey took its place in the front line, and even before London was attacked Hole Haven (where oil storage tanks are) was bombed in May 1940. Fifty-four men from Canvey gave their lives in the war and a memorial hall is being built to their memory. The hall is now under construc­tion in the High Street.

Well, what of Canvey of the future? A housing estate of council houses providing much-needed accommodation. This year a seat was obtained on the Essex County Council, and Canvey is well represented by Councillor A. C. Mason, who is also a member of the Urban District Council.

Four industrial sites are being used. Industries include the manufacture of electrical components, wireless sets, sheet metal and wire components, an oil storage depot, a wharf company, sea-fern products and boat building. Two men (Mr. R. Prout and Mr. F. Prout) from Canvey took part in the Olympic Games as canoeists and upheld local and national honour. There is a strong corps of members of the Civil Defence and an active road safety com­mittee.

Community life is strong on this town-cum-industrial-cum-seaside resort. Two ratepayers’ associations, a thriving cham­ber of trade, youth organizations, rifle and archery clubs, a women’s institute, a horti­cultural society, a canoe club, old-age pensioners’ associations, political bodies, sports clubs (including a yacht club), religious bodies, pre-service and Territorial Army units, Toc H and many others just touch the fringe of them. 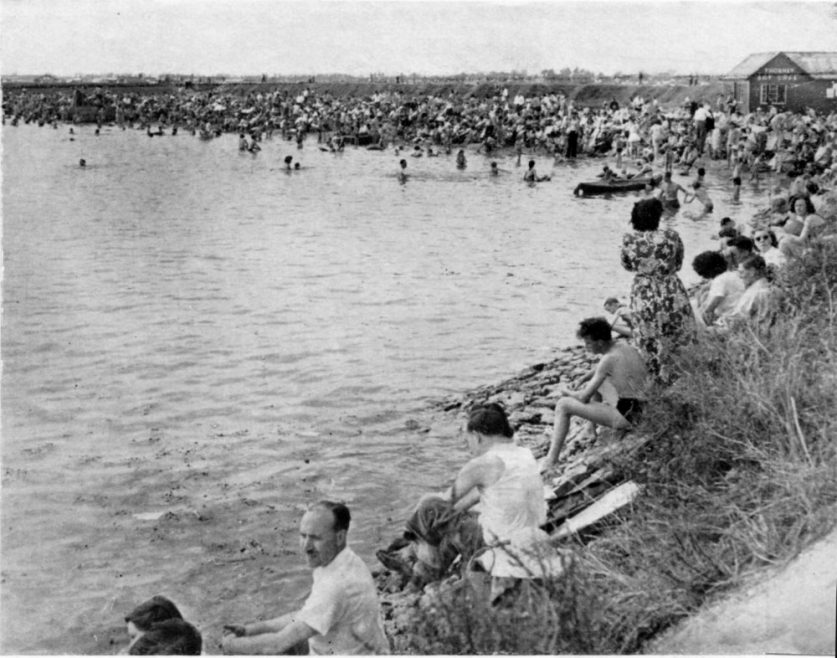 Thorney Bay, Canvey Island, is crowded during the summer months by holiday makes. Here are canoeists, swimmers, paddlers and – well – just everyone having a good time. At the back of the sea-wall and to the left can be seen part of Thorney Bay Beach Camp.

Perhaps the most significant piece of development, and one which shows holi­day resort development at its best during these difficult post-war years, is that of Thorney Bay Beach Camp. Situated very near to one of the chief beauty spots on the Island (Thorney Bay), the camp is divided into three parts—caravans, tents, chalets. The aim of the camp is aptly sum­marized by its founder, Col. Fielder, who says: “The aim is to make the camp a working man’s family holiday camp, where the cost of amusing the children is nil.” Among facilities at the camp are shops, a restaurant-cafe, a golf course and an open-air theatre-cinema accommodating 3,000.

Canvey, situated so near to London and with some of the finest air on the coast, is today providing living room, recreation and industry, a combination which it would be hard to equal in many other counties. Combined with the fact that it is sur­rounded by water (at high tide) and there­fore an island it probably ranks after the Isle of Wight and the Isle of Man in the story of the islands.

Places of interest are : two Dutch cot­tages, the Lobster Smack Inn (dating from 1563), Canvey Village (parish church and old church school are nearby), The Point (where many examples of wild life may be seen), the Chapman Lighthouse (opened 1851), the Winter Gardens (where early development took place about 1900, now residential) and local churches.