The most curious bridge in Essex

This article by Frank Whitnall was first published in the Essex Countryside in September 1966. It is reproduced here with his permission.

Since the day when the official opening of Canvey bridge took place in 1931 countless cars, coaches and processions of vehicles of all kinds have crossed the narrow waters of Benfleet Creek.

Canvey bridge. The opening of the bridge in 1931 provided a permanent link with the mainland and marked the beginning of large scale developement on Canvey Island

For centuries this murky channel had effectively separated Canvey from the mainland and it proved a serious obstacle to any plans for large-scale development. Consequently, comparatively few people were attracted to settle down and work in this somewhat remote and inaccessible spot. Regarded by most as a hindrance, this quiet creek, however, had helped considerably to preserve the atmosphere of rural calm and openness which for so long had characterized these wide and wind-swept marshes bordering the Thames.

Long before the arrival of the Norman conquerers Essex men had known the value of these riverside marshes that provided such good grazing for their herds of cattle and the large flocks of sheep. The day was not far off when Britain’s wealth was to become reckoned in wool, and wool from the Essex marshes at that. Farmers hereabouts certainly knew the real value of these pastures, and until the end of the nineteenth century Canvey was divided among a number of mainland parishes, each of which jealously guarded its important grazing rights on the island.

For generations men strove to make a safer crossing place on to the island, and year after year one reads of cartloads of gravel and larger stones being dumped on to the soft bed of the creek to create a firm crossing place at low tide. Eventually this object was achieved and “Benfleet hard” became the accepted crossing place for pedestrians and vehicles alike. 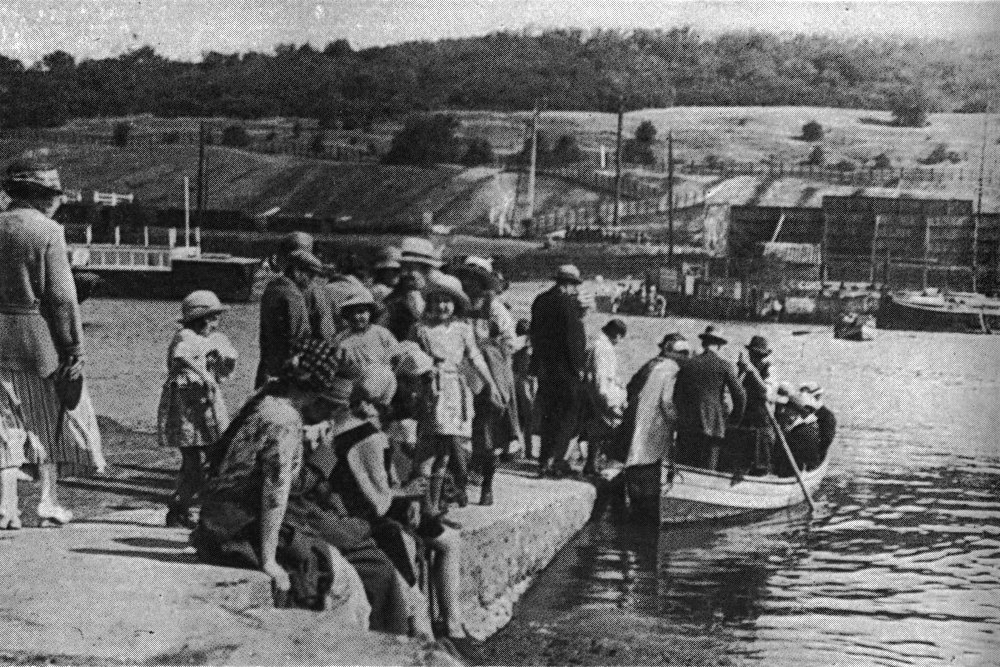 An old photograph of the ferryboat ready to cross the creek at Canvey Island. The passengers were possibly going either to the station or to a picnic on Hadleigh Downs. At holiday seasons the ferrymen were kept very busy by the numerous visitors to the island

The vagaries of the sea, with its unending threat of inundating the precious acres, had made this small community particularly sensitive to the task of maintaining the island’s roads and sea defences. Contemporary records refer constantly to work being carried out on the paths, footbridges, dykes, sluices and sea walls on which the islanders depended. Following the successful reclamation work carried out by Dutch engineers and workmen in the early seventeenth century local landowners had complained that neighbouring parishes were attempting to levy additional rates on them for the maintenance of certain roads. Their complaints were heard at the Chelmsford quarter sessions in 1694 and the court upheld the order made originally by Charles I in 1642 which exempted them “from paying towards the repair of highways of any parish or parishes without the said island.” The order also permitted the local ratepayers to convene a meeting to appoint a yearly “surveyor of highways,” and during the eighteenth century this was known as the annual “cassey [or causeway] meeting,” which took place round about Easter-time. After what was a traditionally lavish official dinner the business took place: the yearly accounts were read, the new surveyor was appointed (a voluntary duty not always willingly undertaken) and the new rate for the forthcoming year was decided.

An interesting reference in the surveyor’s accounts for May 13, 1742, refers to a payment for “a frait of gravel, 5s. 0d,” and another for erecting “a new footbridge over the creek into the island.” Cartloads and sometimes bargeloads of stones, chalk and brushwood were regularly brought on to the island for carrying out repairs to the roads and sea walls, such as they were, and in 1761 an unpopular increase in the rate was recorded to meet the extra cost of the work. In 1785 reference was made to paying a man named Rawlings the sum of 11/4 for “stubbing 136 rods of the road from Russells Farm leading to the Causeway Head”—this involved clearing the surface of weeds, and Mr. Dodds’s bill in respect of ” gravel for the Island Road ” was also settled.
The wooden footbridge referred to was probably little more than a few heavy planks lashed together and raised slightly off the bed of the creek, and in any event it must have soon been carried away by the constant buffeting of the tides. The idea of providing such a bridge soon petered out, and instead slabs of masonry and large boulders were laid on to the hard and remained in place to act as stepping stones over the mud for those not wishing to get their feet wet. 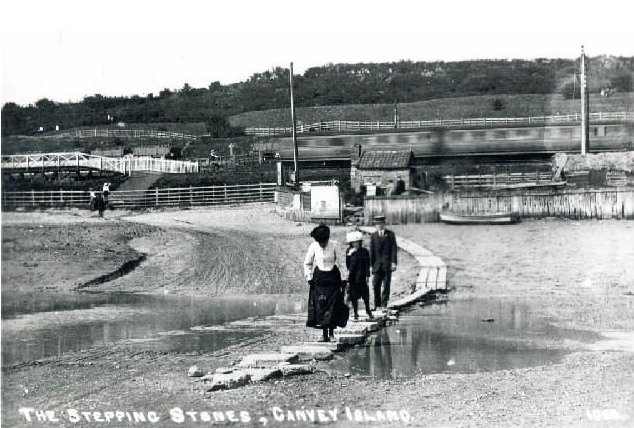 An old photograph of the stepping stones at Canvey Island. At low tide these stones were the only means of crossing the creek and keeping one’s feet dry. The ferryman’s cottage is seen in the background and to the left is the simple wood platform of Benfleet Station. The stepping stones were removed with the opening of canvey bridge in 1931

Several suggestions were made towards the turn of this century for the provision of a proper bridge on to the island, but nothing came of them. Such a small community hardly warranted the expense of a bridge, so for many years the stepping stones and the hard remained the only ways of getting on or off the island at low tide. Once the tide had turned, however, these routes were cut off and the only way to cross the creek then was by means of the small ferryboat that operated throughout the year. One of the last ferrymen was a Mr. Fred Edwards, who lived in South Benfleet, and there was a small ferryman’s cottage built on the side of the creek close to the spot where the present bridge stands. For the convenience of travellers Ye Olde Ferry Tea Rooms were opened and continued in business until quite recently, when local bus services were extended to include through journeys from Canvey to Southend and Shoeburyness. Alas, the tea rooms are now closed and the small bus station is no longer the scene of queues of passengers waiting in the chilling winds for a bus on to the island. Crossing on the ferryboat was a matter of a couple of coppers, bicycles extra of course, and in all weathers visitors and residents alike were rowed across the narrow waters, which have been known to freeze on more than one occasion within living memory. 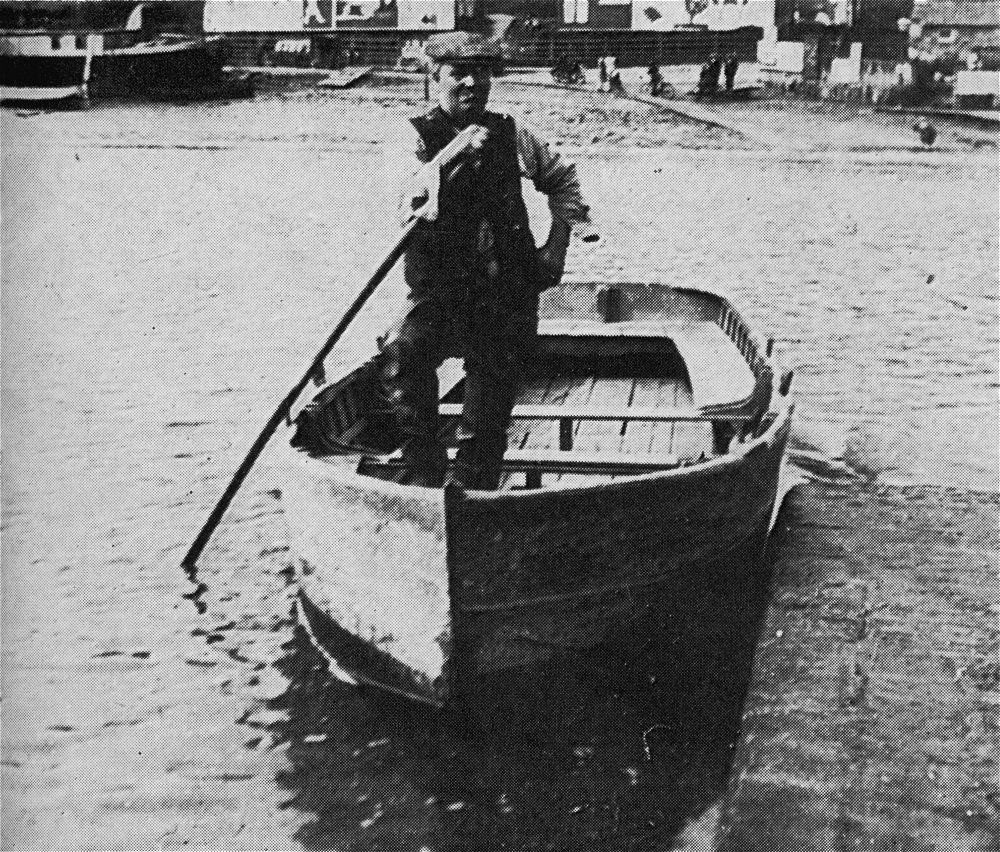 Taken in 1920’s, this photograph shows one of the last of the ferrymen operating his small boat across the waters of Benfleet Creek

With the opening of the railway and the eastward expansion of London and its suburbs the island’s population increased steadily over the years, and in the 1920s it was realized that something more permanent was needed for the convenience of people living on the island or visiting it. More and more people were choosing the peace and quiet of an inexpensive home by the sea, and in the late 1920s the local authority began negotiating for the construction of a bridge across the creek. After lengthy discussions with local land-owners, the proprietors of the ferry and the various public bodies affected by the scheme it was finally agreed to commence work on the building of a bridge, costing in the region of £15,000.

The first pile was driven into the ooze of the river bed at a special ceremony performed by the then Lord-Lieutenant of the county in 1930. The new bridge was designed so that its 300-foot span would adequately carry a twenty-foot carriageway and a single footpath across the creek. The entire structure, supported on a number of wood and metal piles, was engineered so that twin thirty-foot centre sections would retract on rollers over the fixed portion of the bridge. When opened this left a sixty-foot gap through which all but the largest pleasure craft using the creek could pass. Electrically operated, this centre section could be opened or closed in a few minutes and in theory there was only a brief traffic delay, but if the nearby level-crossing gates were closed to allow passing trains through a queue of traffic would sometimes stretch literally for miles at bank holiday weekends. For those trying to leave the island after a pleasant time by the sea it was hardly the end of a perfect day! 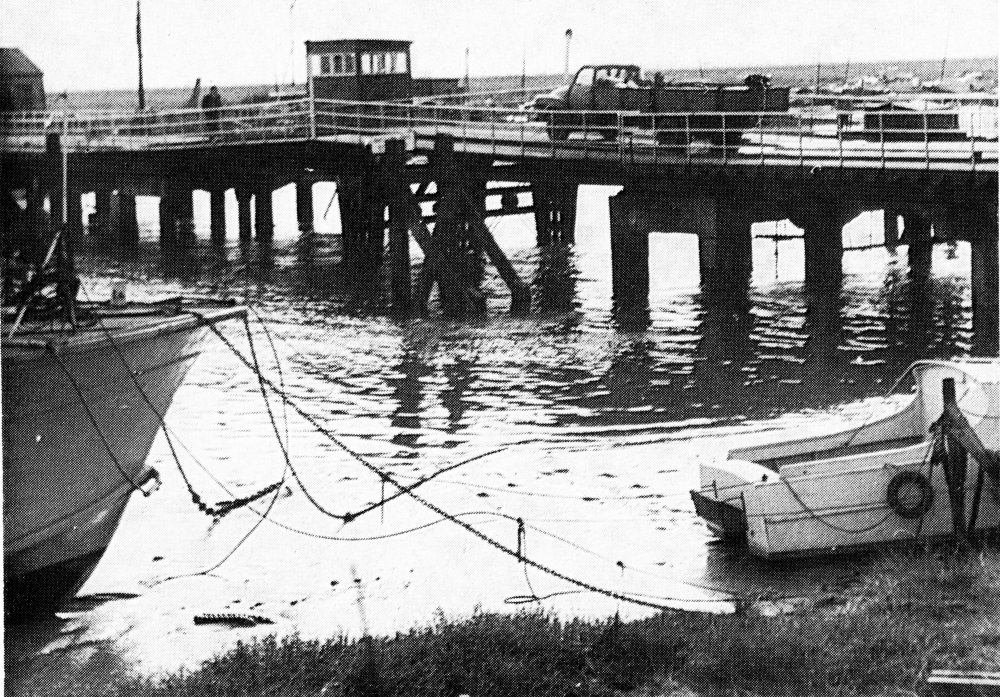 A closer view of the bridge. The photograph shows the centre section which retracts to allow passage of the numerous sailing craft using this stretch of tidal water

With the recent construction of the under-pass road, which now avoids delays at the level crossing gates, now closed, traffic today moves reasonably smoothly from Canvey on to the mainland and vice versa, although drivers of some of the larger vehicles still have to exercise great care in negotiating the steep and narrow High Street leading up from the waterside to the small village of South Benfleet. In recent months traffic surveys have been made with a view to improving the island’s “life-line,” and the subject of a new bridge has been the topic of local gossip and serious discussion for a long time. Doubtless with the continued rise in population and a perceptible expansion of light industries on the island something will have to be done in the future to meet the new demands on this most curious bridge in Essex.