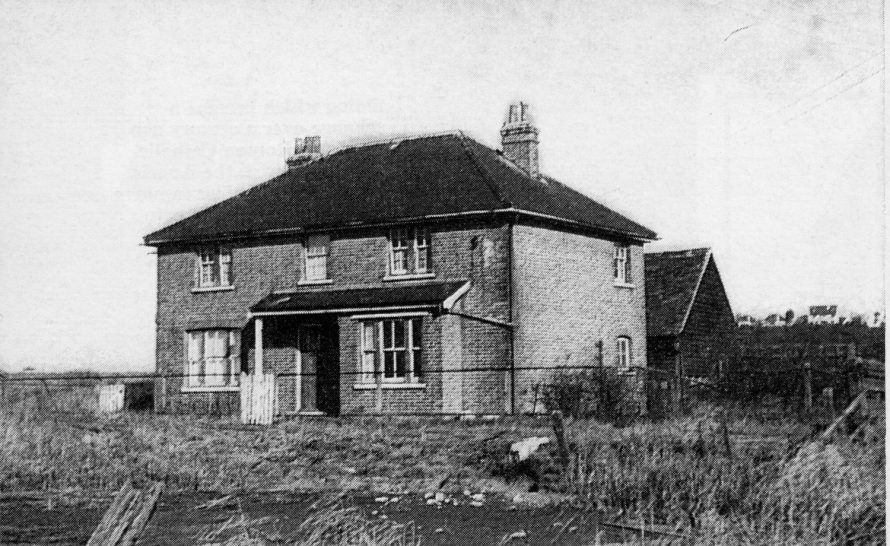 This building at Waterside Farm stands empty now, for the first time in its long and eventful history.

Canvey Island in Essex, like Land’s End in Cornwall, claims a first and last house. However, Waterside Farm makes no attempt to rival its Cornish counterpart. Tourists do not visit it and few artists, photographers or writers would give it their serious attention. The farmhouse stands close to the bridge that connects the island’s only approach road to the nearby mainland. The house and its assorted outbuildings huddle in the lee of ancient sea defences, very unlike the granite bastion protecting its opposite number in the duchy, and in prospect Waterside Farm has only the windswept marshes to contemplate within a stone’s throw of the tidal Thames. It lacks grandeur, but the farmstead’s long history is itself a testimony to the fortitude of generations of men determined to wrest the land from the ravages of the encroaching sea.

Waterside Farm, distinct from the present farmhouse, is probably the oldest on the island, and until very recently remained one of the few to be extensively worked. In Norman times nearby landowners prized the island’s fine sheep pastures, and prior to 1881, when the island was officially constituted a civil parish, the lands were divided and shared by a number of mainland parishes. Considerable numbers of sheep were kept for their wool and meat, and from ewes’ milk large, strong cheeses were made. In the thirteenth century mention is made of a marsh called Westwicke (“wick” referred to a shed for cheese-making), and even today many names on the island remind its inhabitants and visitors of this early husbandry. Essex cheeses acquired an unenviable reputation. Written in the fourteenth century, William Langland’s Piers Plowman makes an aspersion against “a wey of Essex cheese” and a couple of centuries later a Surrey ale-wife complained “. . . of Essex cheese . . . well a foot thicke full of magots quicke …” Strong or otherwise, these Essex marshes supplied their cheeses to ships victualling in Thames-side and east coast ports: the cheeses were renowned for their keeping quality, and up till the early eighteenth century blue-water voyagers learnt to stomach this unpalatable product.

Realizing the island’s agricultural potential, several landowners and businessmen commissioned Dutch engineers to drain and embank a large expanse of marshes. With the work complete, some of these Dutchmen decided to remain and settled down with their families. In time this community grew strong enough to seek permission from the king to hold religious services in their own language and power to appoint a minister of their own choosing. During his tour of the eastern counties in 1722 Daniel Defoe noted that “not one half of the [island’s] inhabitants are natives of the place, but such as from other countries . . . settle here for the advantages of good farms, for which I appeal to any  impartial inquiry.” Remembering the absence of roads on the island at the time it was inevitable that Waterside Farm came under Defoe’s close scrutiny. Seventy years later an Act of Parliament to improve Canvey’s sea defences mentioned that “the produce of the land is considerable and many families are maintained in the cultivation thereof.” By the middle of the nineteenth century the greater part of the reclaimed lands were under the plough, and in his description of the area in 1867 Philip Benton wrote “The soil of the island is heavy, but good corn land, and the arable portion is laid up in beds from three to four rods in width.” The use of this particular method of ploughing and tilling helped to improve drainage of the clayey soil.

Within a few years of this description the effects of agricultural depression changed the face of Canvey Island and brought hardship and ruin to many farmers throughout Essex. Some of the farms on Canvey Island were seriously neglected, and others were left derelict by owners or tenants who could no longer make the land their livelihood. Fortunately, Waterside Farm did not suffer this fate. Remarkably, it survived the depression and its 340-odd acres have been skilfully tended for 300 years or more. Others were less fortunate. Small Gains, Lovens, Kit-Katt, Southwick, Northwick and Monkswick are some that have long since disappeared. Their lands today bear the myriad bungalows and chalets for which Canvey Island is well known. Shops, factories and service stations stand on tidy acres which once yielded good crops of oats and barley. Sheep and cattle are no longer commonplace and with the recent sale of Waterside Farm and the completion of a nearby oil refinery it will be difficult to recall or imagine those scenes of rustic charm so evident at the turn of the century.

For the first time in its long and eventful history the first and last house stands empty. The passing of Mr. Fred Leach, the last of the Waterside farmers, marks the end of an era. Its destiny and that of the surrounding farmland are in the hands of the local council, which recently purchased this “valuable arable and dairy farm.” Its future is a matter of speculation, but one thing is certain: Canvey Island has lost a farm whose fields of ripening corn gave pleasure to its many inhabitants and summer visitors.

For the Essex countryside lover there is one consolation. The first and last house will remain, not as ” a substantial and commodious farmhouse” perhaps, but certainly as a living link with the island’s long and chequered history.

Today the building is used by the council refuse dept. and the area nearby is the local refuse/recycling centre. The farm itself is now a golf course and Waterside Leisure centre.