You are here: HomenextArtsnextLiteraturenextMagazinesnextEssex CountrysidenextSome Canvey Islanders can still remember when......

Some Canvey Islanders can still remember when......

They Drew Their Water From The Village Pump

First published in Essex Countryside May 1971 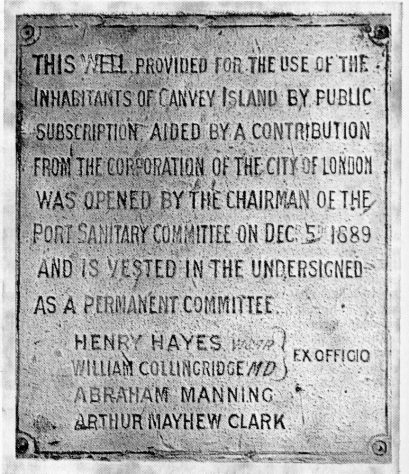 The founders’ plaque. For many years this metal plaque was fixed to the village pump, reminding Canvey people of their benefactors. The plaque is now preserved in the Canvey Island Dutch Cottage Museum

The old iron signpost, leaning a little now with age, points resolutely still to Hole Haven and the sea. Hole Haven, a remote, inhospitable place on the Canvey marshes which in the old days was of no particular interest to anybody except the prize-fighters and the revenue officers, today supports one of the largest oil-storage depots on Thames-side. Standing on the pavement now, close to the old Dutch cottage, watching the huge, noisy road tankers swinging in and out of Hole Haven Road with their bulk consignments of oil from distant wells in the Middle East, it is worth recalling those times not so far distant when the people living on Canvey Island came to this very spot to a very different kind of well: to collect water from the only source that offered free pumped supplies of this precious commodity to the scattered community. Since time began people living on the island had learnt to live with water. Very often for months during autumn and winter there was too much of it when the tides swept in over the low-lying sea walls to inundate the land. In the summer there was insufficient water for the livestock as well as the people. Many an anxious farmer must have gazed at his drought-parched land and mused like Coleridge in his “Rime of the Ancient Mariner “:

“Water, water everywhere Nor any drop to drink.”

The Canvey village pump became a regular meeting place for the exchange of news and views. It was warm work filling the water wagons from the farm and the lad in the centre of the picture (taken before the outbreak of World War I) has removed his jacket and hung it on the rough wooden paling that surrounds the pump.

Not everybody approved the methods employed by the Dutch workmen who drained and embanked the island in the early seventeenth century. The natives were used to handling cattle and sheep, whereas the Dutch who settled here had their hearts set on arable farming. English feelings were notably expressed in a popular ballad of the period which ran:

“Our smaller rivers are now dry land,
The eels are turned to serpents there,
And if old Father Thames play not the man
Then farewell to all good English beer.

Why should we stay and perish with thirst?
To the New World in the moon then away let us go,
For if the Dutch colony get thither first
‘Tis a thousand to one that they’ll drain that too.”

However successful and beneficial the reclamation of the land the problem of providing an adequate water supply persisted. It was to remain a problem for the next 270 years or thereabouts. The few hardy families who chose to live on Canvey Island had to learn to share their drinking water with their animals, and indeed sometimes with their crops. As Charles Vancouver reported of the people in his study of agriculture in the county published during 1795, “They can afford no springs of water. . . . The only supply for drinking or for fencing is to be obtained from the rain, or from the melted snows.” And he continued: “This forms but a precarious and scanty dependence, which in the summer season is frequently dried up, or by putrefaction rendered extremely injurious to the health of the inhabitants, and too frequently also to that of the horses and cattle.” He regarded the lack of “a constant supply of wholesome water in the marsh islands” as one of the “incurable evils” preventing any kind of agricultural improvement in the county. Following Vancouver’s report a century elapsed before Canvey became a separate civil and ecclesiastical parish. The community had been fortunate in having had as their curate-in-charge the Rev. Henry Haynes, who from the moment of his arrival on the island in 1872 set about providing his parishioners with some of the amenities he recognized as basic to their health and welfare. During his incumbency the new parish gained a new church and its first school, but perhaps more important at that time was the provision of a proper water supply for the steadily growing population. The village pump, as it came to be called, stood in the middle of the road at the junction of Long Road and Hole Haven Road, opposite Ye Olde Red Cow public-house.

The village pump on Canvey Island as it was at the turn of the century. The pump was erected in 1889 by public subscription and provided Canvey with its first regular water supply. An original ‘Dutch’ cottage built in 1621 is seen on the left of the picture.

The cost of providing the well was largely met by voluntary public subscription, aided by a grant from the Corporation of the City of London. Sinking the well was entrusted to a Mr. Furlong, who had the unenviable task of boring through 300 feet of mixed beds of sand and thick London clay. It was a great day when the well was officially opened on December 5, 1889. Crowds gathered at the spot to witness the event, and as the first bucket to be drawn emerged from the depths up went the cry “Water! Water! ” Excitement was intense, especially among the older inhabitants, who saw the new amenity as ” a veritable oasis in the desert.” For the next thirty-three years the pump remained in constant use and during this period retained its reputation for providing water regarded as “the best supply in the parish.” A thatched roof covered the iron pump and around the eaves a painted wooden board bore the inscription “whosoever drinketh of this water shall thirst again, but whosoever drinketh of the water that I shall give him shall never thirst.” As a focal point the village pump soon became a regular meeting place for the exchange of news and views, and the island’s smith, who worked in the small forge adjacent to the inn, was doubtless grateful for the large horse and cattle trough placed nearby. Apart from a number of private wells elsewhere and the watermill at Leigh Beck Farm, for the supply from which customers paid 2/6 a quarter, most islanders got their water from the village pump. There are people still on Canvey who remember collecting water from it. Some, fortunate to possess a horse-drawn water-wagon or wagonette, did so in comfort, but many more recall a mile or so walk across open fields and along dusty roads with a cumbersome water-barrow, or perhaps a couple of pails hitched to a shoulder yoke. 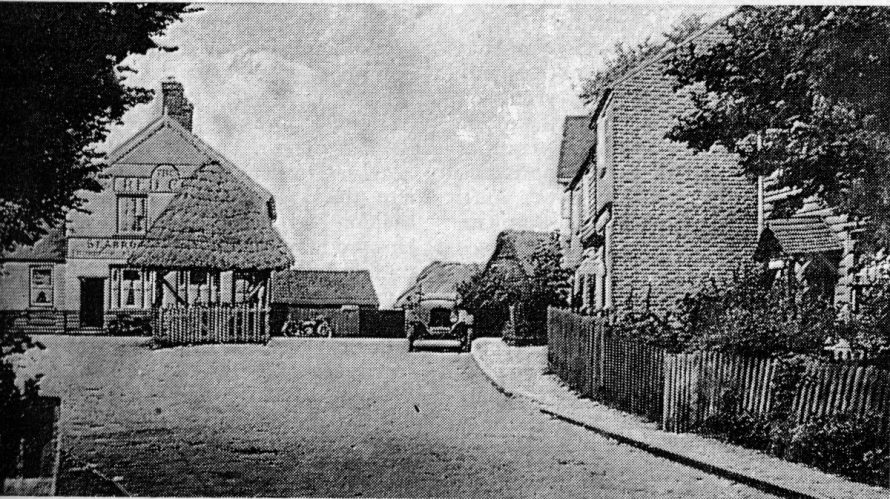 Another old photograph of Canvey showing the village pump

In 1913 the Southend Water Company assumed responsibility for supplying water to Canvey Island. Even so, every householder took the precaution of keeping a large water-butt in the garden and it was not until 1922, when Canvey was finally connected to the main, that the community enjoyed at long last a completely safe and reliable water supply. Today Canvey consumes well over 1,000,000 gallons of water daily-a far cry from those days fifty years ago when it was measured by the bucketful.