Canvey's transition is an object lesson

Published in the Essex Countryside June 1969

A few years ago the old village of Canvey lost another of its rapidly disappearing links with the past. Deciding that necessary road works were hindered by the existence of a former horse trough the local council decided to remove it. 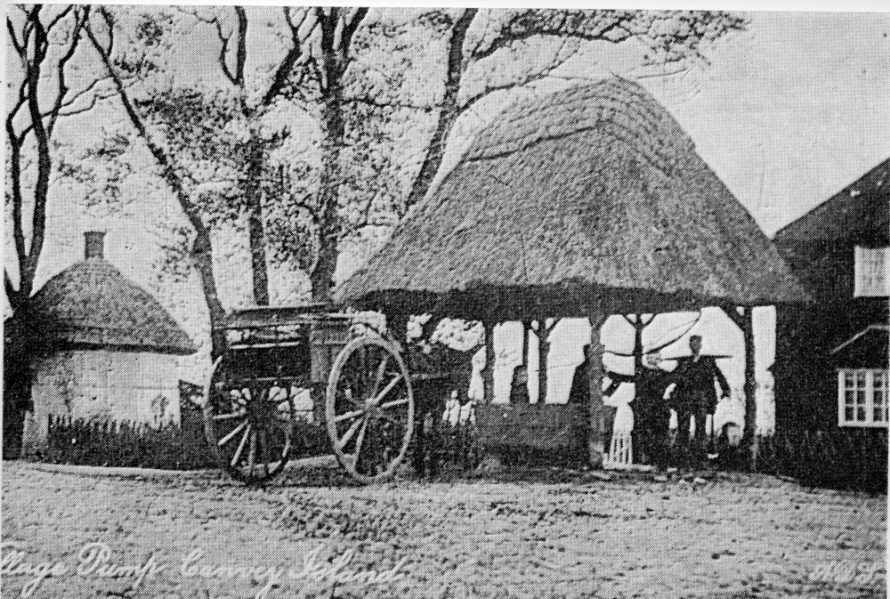 Erected in 1889 by public subscription, this well stood in the centre of Haven Road for many years. Note the man bearing the yoke. In the background is the Dutch cottage built in 1621

This useful acquisition stood for many years close to the old village pump, where it was used by the many farm-horses and carriers working on the island. It was placed there by the Metropolitan Cattle Trough and Horse Drinking Association, in conjunction with other donors, following the closure of the pump when piped water became available to the villagers in the early 1920s. Luckily the trough has not been lost, for it was taken to the grounds of the Dutch cottage museum. The only reminder of the old village pump is a metal plaque in the road marking its former site and bearing the inscription:

“This well provided for the use of the inhabitants of Canvey Island by public subscription aided by a contribution from the Corporation of the City of London was opened by the chairman of the Port Sanitary Committee on December 5, 1889, and is vested in the under-signed as a permanent committee.
HENRY HAYES, and WILLIAM G. COLLINGRIDGE, M.D. Ex-officio, ABRAHAM MANNING, ARTHUR MAYHEW CLARK” 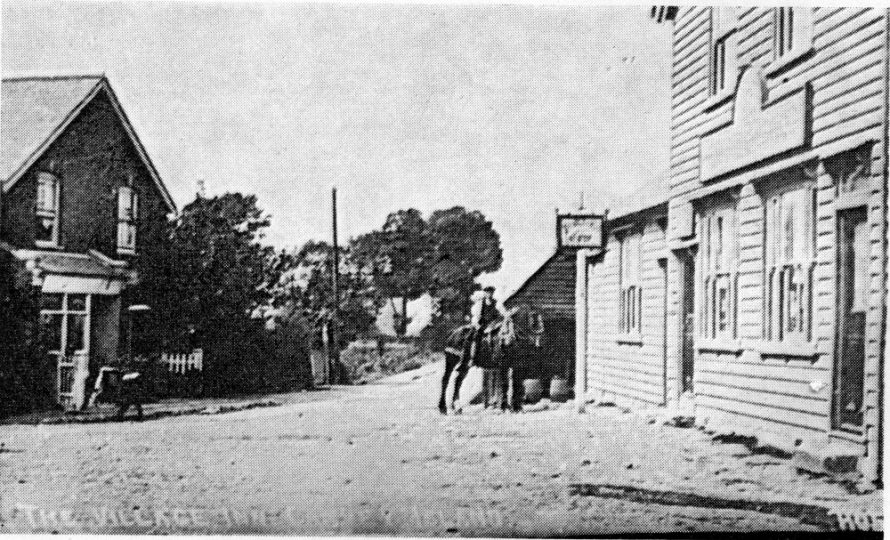 The Long Road, leading to Northwick Corner, was much narrower than it is today. The village inn is Ye Olde Red Cow, and close by is the blacksmith’s forge.

In passing it is interesting to note that the Rev. Henry Hayes was a tireless worker on behalf of the material as well as the spiritual comforts of his parishioners, and Arthur Mayhew Clark, a considerable landowner, was well known for his benevolence besides his business interests. The removal of the old horse trough serves as a timely reminder of the many landmarks and Essex oddities that no longer remain, or perhaps are currently overshadowed by the threat of destruction. For the modern visitor who recollects Canvey village of fifty or more years ago a visit today is an object lesson in a study of our changing countryside; in many ways the village has changed almost beyond recognition.

Approaching Canvey village today a large number of modern homes and an expanding factory estate occupy the fields where oats and hay were once harvested. Part of the lands close to the former Charfleets Farm, first mentioned as Chafflete in the calendar rolls of 1387, now accommodates, among other things, an unimpressive filling station. Close by stands the former parish church of St. Katherine, rebuilt in 1874 and the scene of many a controversy between the early English and Dutch communities who had settled on the island at the time of the extensive land reclamation schemes. The church is now simply a chapel of rest, leaving the more important and often hectic business of a growing parish to the new church of St. Nicholas a mile away up the road. Together with the recently opened church hall these highly functional buildings would possibly have struck our Victorian predecessors as improbable, if not unnecessary, extravagances, but a new community often has new ideas and demands up-to-date facilities. The new church buildings have been created to meet the special needs of a rapidly growing population. 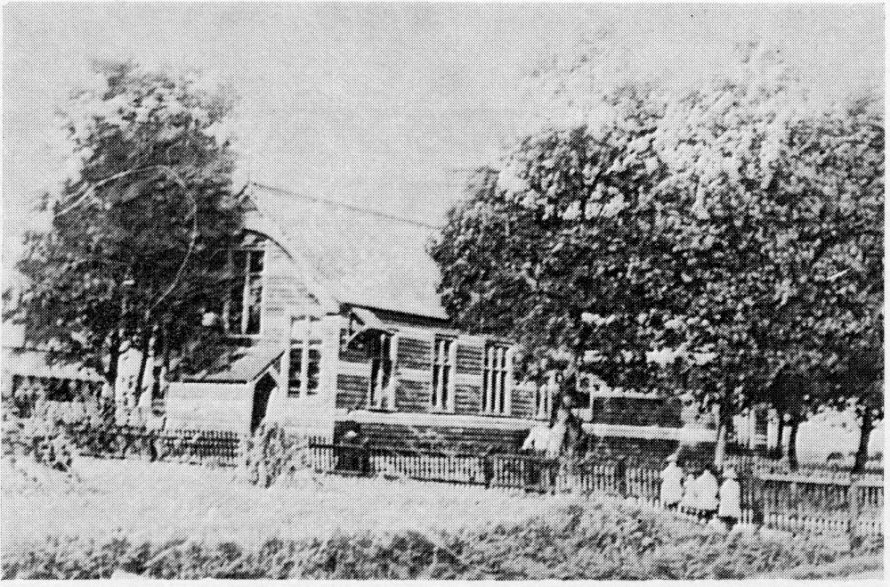 The village school – phtograph taken at the turn of the century. A number of pupils can be seen outside the wooden structure

In 1911 the local parish council administered an area whose population numbered approximately 600; fifty years later, following the creation of an urban district, the population is estimated at 20,000 or thereabouts, and it is still increasing. One still meets folk on the island who remember the village church school, with its wooden walls, the open privies at the rear, the all-age classes and the modest bell over the entrance which the teacher rang each morning. The school, which later served as the village hall, has long since vanished and is now the site of a modern chalet and a cluster of semis. Next to the Red Cow public-house stood the important blacksmith’s forge, which in the course of time has disappeared to make way for the age of the horseless carriage, and the public-house, renamed the King Canute after the disastrous floods of 1953, has been entirely rebuilt and given a new look by the present owners, who took over from the old Essex brewers Seabrooke and Son, famed for their strong Thurrock ales. 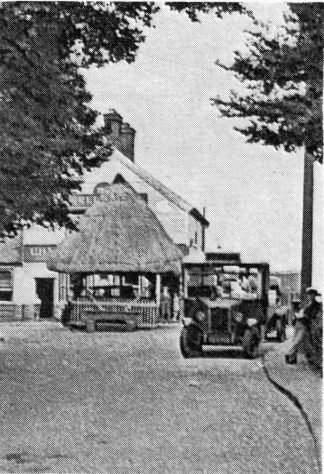 This picture, taken in the late 1920’s, shows a single-deck bus operating on the island. Its destination was the Lobster Smack less than a mile away.

Several of the weather boarded cottages defy the march of time and are still to be seen in the village, typical of numerous marshland dwellings in this stone less land. The curiously shaped Dutch cottage dated 1621, which is one of the oldest surviving buildings on the island, is still inhabited. Looking at the tiny thatched cottage nowadays one wonders if many of the present houses will be standing in 350 years’ time. Numerous property owners in this day and age take the trouble to give names to their houses, but few bother to date them. The rambling vicarage, so typical of its kind in days gone by, has recently been demolished to make room for several more homes, but the few shops facing the aptly named Long Road firmly keep their place in the village. Maybe the businesses have changed. The village general stores and post office no longer handles groceries, mail and insurance matters, and the land lord of the local has long since ceased handling the occasional funeral arrangements, but the shops themselves remain largely as they were.

Sweeping through the village today are the large, lumbering oil tankers in place of the single-deck buses that carried passengers to the old-world Lobster Smack inn at Hole Haven in days gone by. Doubtless many a good yarn has been told in the warm cosiness of this secluded inn, which boasts time-honoured associations with smugglers and prize fighters. Gone are the buses, and on the site of the prize ring stand the cars of the numerous visitors who enjoy this isolated spot on the marshes with wide views of the river. 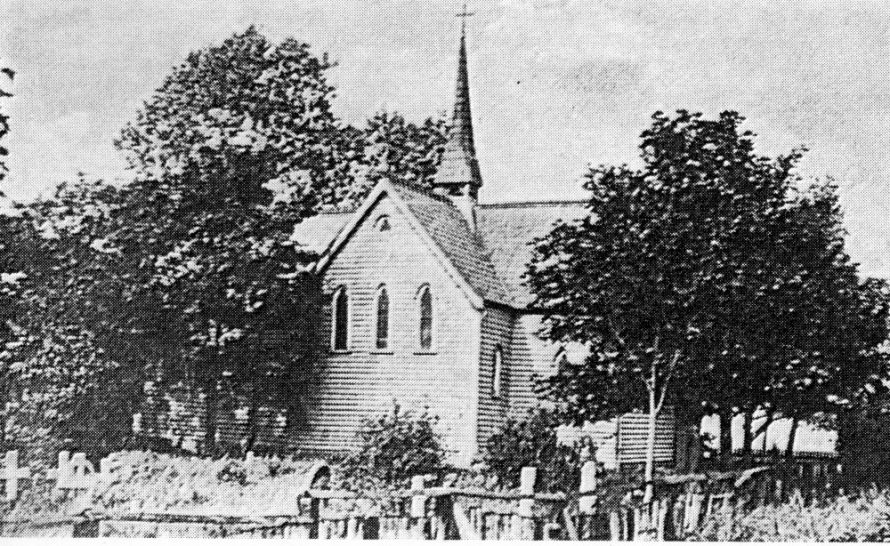 Ever since the first Dutch settlers arrived on the island the village has had a regular place of worship on the site of St Katherine’s. The present church, no longer the parish church, was built in 1874 and was dedicated by the Bishop of Rochester the following year.

Close to the village where sheep and cattle grazed in large numbers now stand tall, gaunt oil-storage tanks, which pioneered an industry in the 1930s. Occasionally animals are still seen quietly grazing on the remaining land, but they graze in the shadow of these unattractive monoliths which have since mushroomed over quite a wide area, overshadowing fields that were recently gazed upon by the farmer.

This brief story of change in a small Thames-side village can be observed and retold again and again throughout the Essex countryside.