Frank Whitnall’s article was first published in the Essex Countryside in 1966. Reproduced here with his permission. 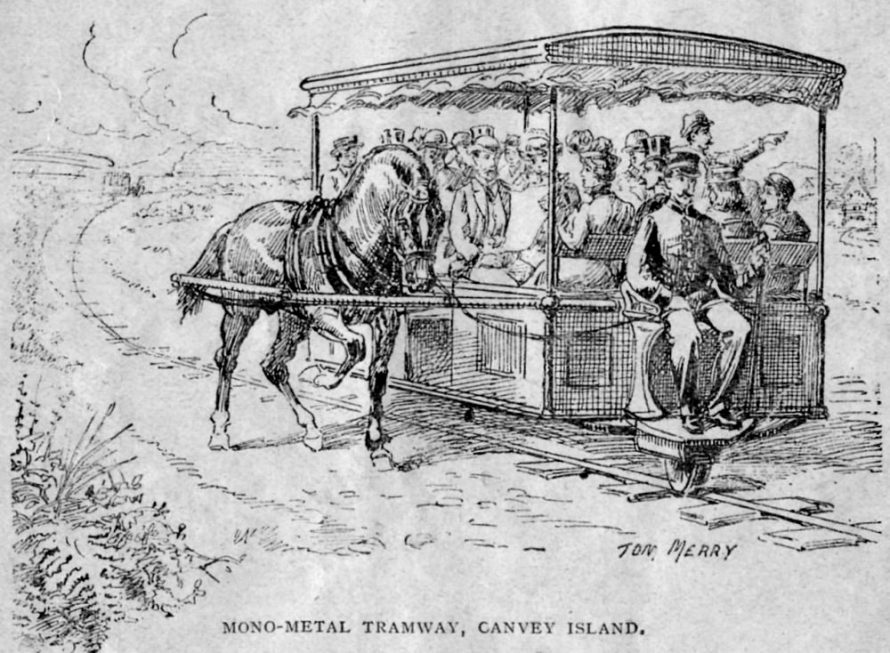 The frst Essex Monorail as it appeared in The History of Canvey Island, published in 1902. The plan was to provide cheap and comfortable transport for the holidaymakers enjoying a brief spell away from ‘murky London.’

The completion of the main-line railway between London and Shoeburyness virtually marked the beginning of the “overspill age” in the south-east corner of the county. The new line encouraged businesses and work-people to escape from the sprawl that was fast becoming London and helped in an in- expensive way to bring the city into easier and closer contact with the countryside and the sea.

At the turn of the century many enterprising speculators were investing in the numerous new developments taking shape in this part of Essex. One of these was a gentleman by the name of Frederick Hester. Conscious of “London’s teeming and toiling millions” who had been awakened to the possibility of “a holiday by the sea,” he envisaged supplying “murky London with yet another lung.” In brief, he proposed transforming Canvey Island into a premier holiday resort.

This Victorian merchant adventurer realized that the ultimate success of the scheme depended largely on a plan to provide this remote Thames-side marshland with better internal communications, and soon after his arrival on the island he decided to build his own railway.  Various factors prevented the construction of any normal type of rail service, and Mr. Hester, determined to realize his ambition, conceived the idea of providing a monorail tramway—which at the time proved to be quite a revolutionary concept in any public transport undertaking. As the second edition of Daly’s History of Convey Island, published in 1902, proudly states, “With regard to the mono-metal tramway, it will always redound to the credit of Canvey Island that it inaugurated this novel and rapid system of locomotion in England.” It was certainly a bold and far-sighted plan for a community that at the time numbered less than 500 people.

Mr. Hester’s plan was to link the ferry landing stage at Benfleet Creek, which also served the main-line station nearby, to the new pier and esplanade then under construction on the south side of the island facing the Thames. As an added attraction the monorail would run close to the  exotic Winter Garden Palace, also under construction, which was designed to be one of the largest and most unusual of its kind in the south-east—or indeed anywhere.

Work on the monorail system began in earnest during 1901-2, and a single steel track, including a number of lay-by loops which allowed cars to pass each other en route, was laid over a distance covering about three miles. An early development plan prepared by Mr. Hester shows the  monorail running close to the old Dutch counter sea wall through the Winter Gardens area to Lakeside, where it ran due east alongside the present High Street to Small Gains Corner. Here it continued along Point Road to the spot where a sharp turn led to the terminus close to the projected pier and the Marlborough House hotel. At Small Gains a branch line was planned to serve the water-side jetty which then existed in the creek to accommodate barges that brought large supplies of timber and ballast to the island. Close to the farmhouse at Small Gains, in which the Hester family had lived for a short time, this pioneer developer planned to extend his tramway over the waters of the creek so that it would connect with the mainline railway, providing quicker access to and from Southend. This branch line never materialized, but in due course part of the main section of the monorail from the Winter Gardens to the sea front was laid down.

Passengers were to be accommodated in a grandiose tramcar which was designed to balance simply on two wheels, one at the front and the other at the rear, and which ran along the slender track supported by the weight and forward thrust of the thoroughbred horse that was harnessed to a wooden frame so that it could help propel this un-usual vehicle. Each tramcar was open-sided and built to carry sixteen passengers or thereabouts, who sat on upholstered benches under a canopy-type roof. The driver-cum-conductor, dressed like some Ruritanian prince, sat on a small open platform from which he was to control the carriage and give a running commentary on the journey to the delighted passengers! 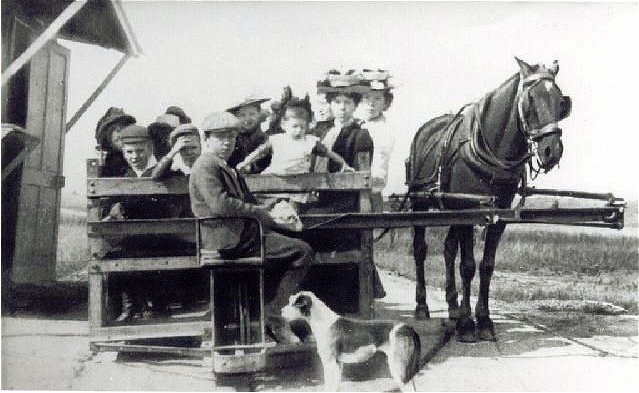 The first Essex monorail as it finally appeared for a brief season during the summer of 1902. It was a rather dismal contraption compared with the one originally envisaged by Mr. Fred Hester, the pioneer developer of Convey Island.

Alas, an untimely lack of funds prevented the completion of most of these enterprising plans and his scheme to electrify the tramway had to be abandoned. However, the monorail did run for a short time and there are those who still recall paying a few coppers for a short ride on this novel conveyance “through fields of waving corn,” and in 1902 Daly noted that “it is now possible to travel by mono-metal tram- way, under cover, through a delightful vista of floriculture.” The actual tramcar brought into service on the monorail was very unlike that originally envisaged by Canvey’s pioneer developer. As the accompanying photograph suggests, it was little more than a wooden crate on wheels pulled by a nag more ready for retirement than for work on the railway. The conductor appears to be a somewhat indifferent youth dressed in the typical working togs of the day, waiting with his unperturbed mongrel for a few more passengers who were prepared to risk a journey on this bizarre contraption.

The first Essex monorail enjoyed but a brief life, and with Mr. Hester’s departure from Canvey Island the plan to give the community its own internal railway collapsed entirely. Today only the local name of Station Road remains to remind passers-by of those far-off days when the monorail terminus at the seaward end of the island prepared to meet the hordes of happy-go-lucky holidaymakers anticipated by the early speculators. Nothing remains of “the only one-rail tram of its kind in England,” and with the measures taken under the present Beeching plan it seems unlikely now that Canvey Island will ever again have its own internal railway, let alone any permanent rail link with the nearby mainland.