You are here: HomenextArtsnextLiteraturenextMagazinesnextEssex CountrysidenextThe Land God gave to Canvey

The Land God gave to Canvey

The 4,000 acres of Canvey Island have seen many changes in fortune since men began settling down on these riverside marshes.

Land has always been fair game for the enterprising developer, and nowhere in Essex can this be more clearly seen than on Canvey Island, whose 4,000-odd acres have continually been a matter for optimistic speculation since men began settling down on these riverside marshes. The salt-loving Romans extracted what they could and in the Middle Ages much of the land is known to have been in the hands of the Church. During the early 1600s a group of influential landowners commissioned Dutch engineers to drain and embank the island. In the course of time this new land was carved up among nine neighbouring main-land parishes, which for the next 200 years jealously protected the valuable grazing that these windswept marshes afforded. 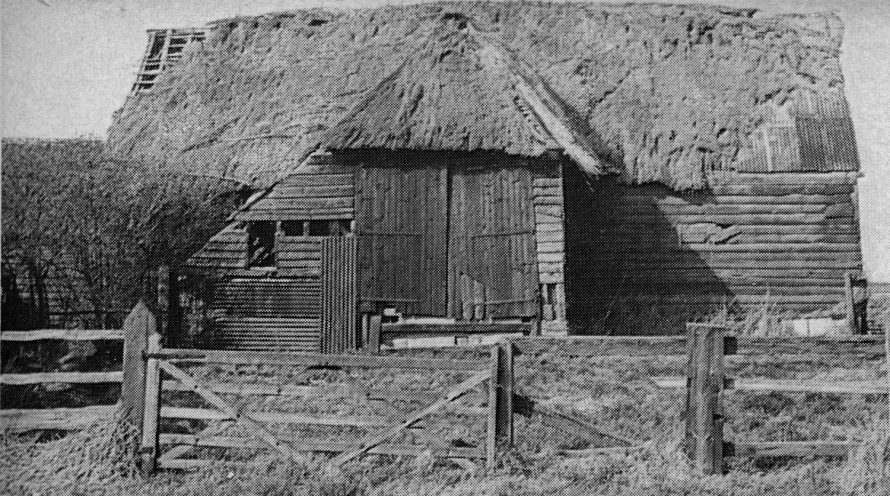 The end of an era. Much hardship was suffered during the agricultural depression of the 1880s and many farms like this one on Canvey Island never fully recovered from the blow

The agricultural depression of the 1880s, however, brought a startling change to this Thames-side community. Suddenly centuries of painstaking husbandry and back- breaking effort were cast aside as Essex farmers discovered that they could not compete with the prices of imported wheat, meat and wool. In parts of the county- and in this respect Canvey was no exception-farms were abandoned and a landowner lucky enough to find a buyer was frequently glad to be rid of a millstone. In no time at all good farming land reverted to rough pasture and untended marsh,  farm buildings were left unoccupied and fell into disuse and decay, and fewer and fewer sons of the soil remained to tend the land. There must have been many farmers who viewed the empire on which the sun never set with very mixed feelings, and many an Essex village waved goodbye to the families of agricultural workers who decided to emigrate and seek fame and fortune overseas. For a time the outlook on Canvey was bleak, and it really did seem that the island would never regain any of its former prosperity; but land is land all the world over and there are men who are irresistibly drawn to it: some exploit its mineral wealth, some see riches in agriculture, and there are others who recognize its industrial or residential possibilities. It was in the last-mentioned that Canvey had a chance for a fresh start. 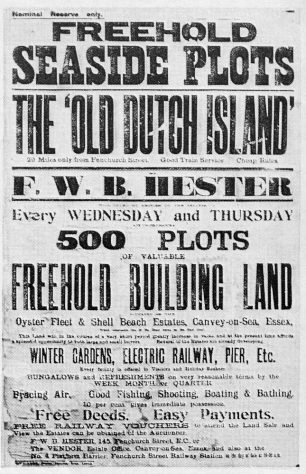 Land for sale. A poster designed to attract clients to the land sales held regularly on the island in 1902, when a freehold plot could be bought for as little as £5.

In the early 1900s a resourceful speculator began advertising plots of building; land on “the old-world island of Canvey . . . the coming watering place of the east coast.” The grand plan for the development of Canvey Island was master-minded by a Mr. F. Hester, who had visions of the place being among “the most popular and thriving health and pleasure resorts.” A London auctioneer was taken on to conduct the land sales, and besides being offered free transport from Fenchurch Street to Canvey prospective purchasers were frequently wined and dined right royally by the local agent. The sales took place in a large marquee close to the creek- side ferry and within convenient reach of Benfleet station. Anyone interested could buy a freehold plot for as little as £5. Within a short time small estates of bungalows started appearing in fields not long since under the plough, and a bizarre assortment of holiday retreats sprang up as people cashed in on the chance to own a country seat. Railway coaches, road wagons, caravans and shiplap huts were hastily erected, to be modified later into “cosy nooks” by their do-it-yourself owners. For half-a-crown one could join the Canvey-on-Sea Land Owners’ Association, whose members in 1906 sought to protect their interests ” and secure rights and privileges” (they do not say how), and in that same year a plot of land could be bought for as little as £3. 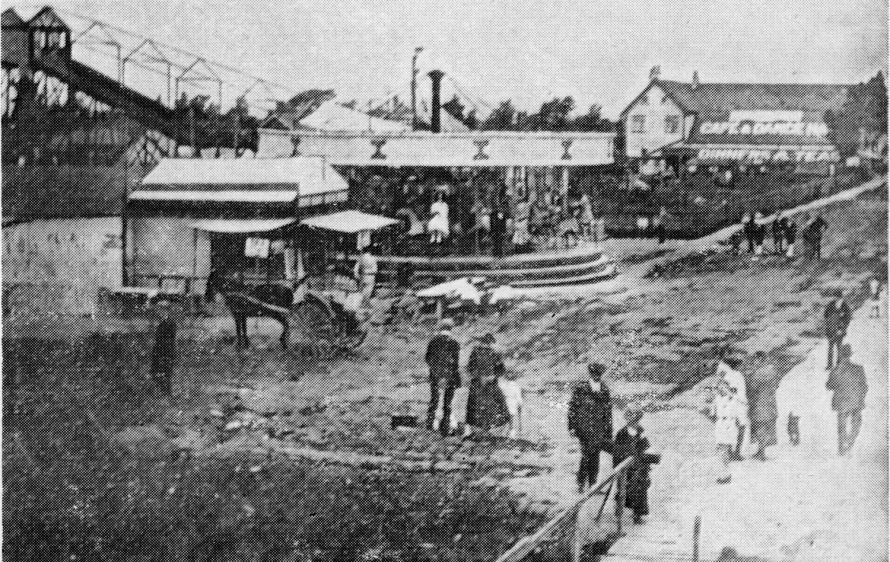 All the fun of the fair at Silver City at Canvey for those lucky enough to have a holiday on the island in the 1920s.

The new occupiers of Dunromin, Takiteze, Restawyle and countless others were on to a good thing. For those wanting to live it up, twelve shillings paid for a weekend at the Hotel Kynoch, while at the opposite end of the island at Marlbro’ House, ” facing the sea,” a week’s board residence cost only a guinea. Camping was popular at the time and it was not unknown for a family’s camp site to become their permanent home after “squatting” on it for a number of years! The 1920s and 1930s saw a revival in farming on the island. The number of homes increased, an oil-storage plant was, constructed, and all the thrills and spills of the fair at Silver City amused the steadily increasing number of holiday-makers. By the time war was declared in 1939 bed and breakfast still cost only 4/6 a head at Ozonia, and anybody with a spare £400 or who could manage easy terms could secure a property with all services “near to the sea and main road.” Rates were fixed at 8/- in the pound and intending residents were encouraged to note that the clay soil was “extraordinarily prolific.” Six years of war prevented large-scale development or indiscriminate land- grabbing. A base camp was set up for those men who manned the gun sites and the riverside fort. The fort is empty now, its derelict gun-bays overlooking the grey river and the wide skies of Essex and Kent a reminder still of those days in the early stages of the war when young men fought desperate duels for mastery of the air. The war brought about a price spiral, and in 1946, when the weekly season ticket by rail from Benfleet to London cost 17/4, the cost of a holiday at Sunnyside had risen to four and a half guineas. 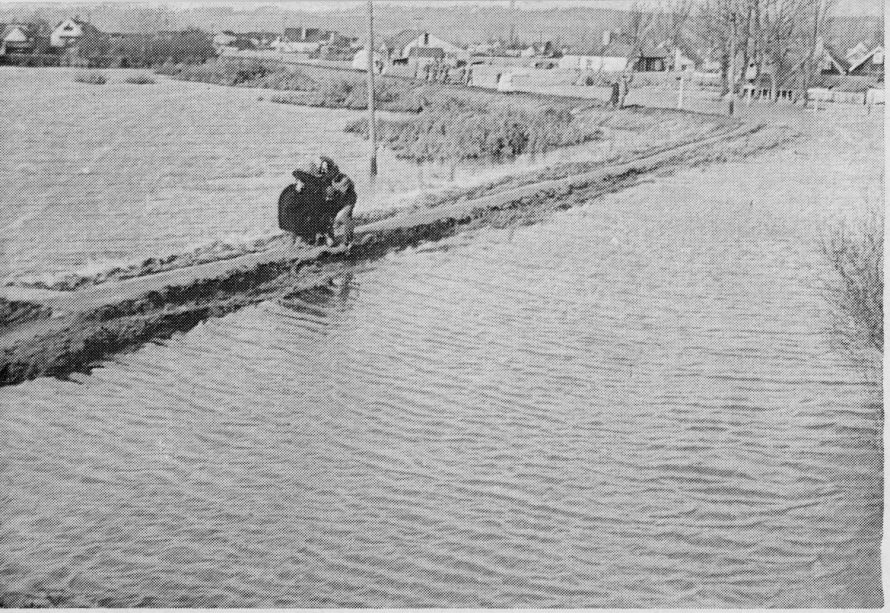 Nearly sixty people perished in the disasterous floods of 1953 and many were made homeless. Servicemen are seen here lending a helping hand to the stricken community on Canvey Island

Many thought that the island was finished after the disastrous east coast floods in 1953, but support for the stricken inhabitants was nationwide and within days of the massive clearing-up operation the local paper predicted that Canvey would rise again-and rise again it did. With the building of a £1,250,000 sea wall people’s confidence was restored and in the past fifteen years the island’s population has nearly doubled. Many of the old hotchpotch homes have been demolished to make way for today’s “architecturally designed residences.” Plots of land that were once bought for £5 can now fetch anything up to £1,000, but still on occasions the appearance of an overnight fence announces somebody’s intention to become a man of property. As a friend remarked recently, “It’s still pioneer country.”   With so much building going on nowadays one is left wondering when the development will stop. Many of the fields and dykes of yesteryear have gone, and if the proposed plans for a massive new oil refinery materialize Canvey will have lost yet another area of unspoilt marshland.

But for some the grey-green saltings that stretch beyond the sea wall towards Canvey Point will always be a place to walk, to have an uninterrupted view of the river and to feel the fresh sea breezes blowing in from the estuary. Among the sea-lavender and the scurvy-grass a visitor will still hear the shrill song of skylarks and watch great flocks of gulls gliding effortlessly over the water. It is unbelievably quiet. The only thing to do here is to stand and stare: to savour the smell and take in the sights and sounds of a land deeply rooted in the past, a land which thankfully will remain for the most part free from the so called progressive ideas or downright greed of urban developers. Here, in spite of the tides, a little bit of old Canvey will be preserved for all to see and enjoy:

The land God, and the Dutch, gave to Canvey.