Aubrey and a 'Treasure Island' 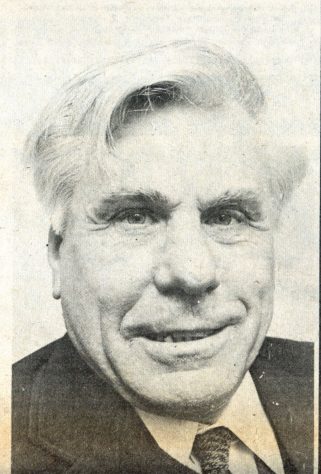 There were no roads on Canvey when Aubrey Stevens and his family made their home there, nearly 60 years ago. The Stevens family, with true pioneering spirit, have stayed loyal to the changing face of Canvey. They have watched it grow, family by family, brick by brick. And to them, and hundreds like them, the Island has the at­mosphere, the intangible feel of “home”.

Mr. Stevens, 61, of Gafzelle Drive moved to the Island from Eastbourne when he was a toddler. He has married on Canvey and raised four children. And his affection for the Island overflows in his modern detached home, which overlooks the bakery his father built in the High Street more than 50 years ago. The walls are covered in paintings and pictures of the Island. And his study contains possibly the best historical record of life on Canvey since the turn of the century. Mr. Stevens has hundreds of post-cards which make a fascinating collage of the Island’s past.

The face of Canvey has changed — perhaps more than anywhere else in Essex. Many of the old landmarks have gone forever. The lighthouse has disappeared — so has the seafront hotel, the Kynoch, built in 1900. The hotel, of bizarre design, but a proud memorial to the independence of architectural standards on the Island, has been bulldozed. London and Coastal Oil Wharves have put offices on the site of the old hotel. Mr. Stevens explains: “The hotel had to go — it is a shame, it should have been saved — but the land was needed for another purpose”. He remembers that the last manager of the Kynoch was George Pickett. George, 81, of Delfzul Drive, is the present chairman of Castle Point Council.

“We have no hotel on the Island now”, says Mr. Stevens. “Plenty of visitors fill the holiday camps in summer but that’s about all.” He watched the holiday trade grow on the Island from when the first hardy holiday makers brought tents and camped in the open. Others bought cheap holiday bungalows which they visited every now and then. Over the years a lot of these have become permanent homes for families.

At one time there was a fairground at the top of May Avenue. The Casino has survived more than 40 years but other holiday attractions have disappeared. The narrow canal-styled boating pool has been filled in and Cox’s Emporium has been bulldozed to make way for a block of council flats.

The first meeting of non-conformists on Canvey was held in a conservatory behind Cox’s Mr. Stevens recalls. One of the most extraordinary postcards in his collection shows the horse-drawn monorail of 75 years ago. This ran on tramlines and carried passengers between Waterside Farm and the seafront.

Ferry boats and horse-drawn ferries provided the only access to the Island when the tide was high at Benfleet Creek. At other times people walked across the stepping stones. Hay barges were regular callers at the Creek in the 1920s and collected hay grown on Canvey, 60 years ago the main industry in the area.

Haven Road, the heart of old Canvey, housed the old water pump, the Dutch Cottage and the Red Cow pub. The pump with its thatched roof has gone. Mr. Stevens remembers staff from the bakery shop at Haven Road drawing water from the well to mix the dough. The Dutch Cottage still stands —just — in ruinous con­dition. And the Red Cow was renamed the King Canute after the 1953 floods and survives.

Mr. Stevens delivered bread from his father’s bakery by horse-drawn cart until the last war. He and his family lived through the nightmare floods which claimed 58 lives. They were in a bungalow within yards of their present home. About 18 inches of water swept through their home and they were forced to leave the Island. But they were back within 24 hours helping flood victims. The family lost a dear old friend in the worst night of Canvey’s history. Mrs. Hindie, a pensioner who served bread at their May Avenue shop, was drowned when the wall of water engulfed her home at Gills Avenue. “It was a tragic time — the worst event in our history”, Mr. Stevens recalls. “But Canvey people are tough. They mopped up, rebuilt and stayed put”.

Mr. Stevens is a member of Benfleet and District Historical Society. He has a map, about 100 years old, which marks out the position of dynamite hulks, which were moored off the Island to replenish gunpowder boats. The dynamite caves at South Benfleet were on the site of the present day sewage works. The underground stores were built of bricks made at the Hadleigh Salvation Army colony.

Mr. Stevens is immersed in the history of the Island. He is ready to roll up his sleeves and fight to save the derelict Dutch Cottage. And he hopes St. Katherine’s Church, the Lobster Smack and Coastguard Cottages will be preserved forever.

But he has a practical side, a lack of sentimentality for some of the old buildings which have disappeared. “Of course buildings have been pulled down and others put in their place — without development there would be no history.” He filmed the changing face of the town centre when developers moved in about three years ago to begin work on a multi-million pound complex. Old shops were demolished. But plans for the centre are now in limbo because of cash problems. Mr. Stevens said: “One day we will have a modern shopping centre, and this is exactly what we want. I welcome the big increase in population and efforts to modernise the Island.”

He feels Canvey lost out in the local government reorganisation two years ago when they joined Benfleet and formed Castle Point. But he says: “We must accept it. Trying to break awy now is about as useless as trying to unscramble eggs. It’s up to us to get the best deal we can.” He is keenly interested in the workings of the council but has never stood for election. “I have considered trying to be a councillor but I have come to the conclusion it is just rat-race. I am connected with welfare bodies and this keeps me busy.”

Mr. Stevens and his wife, Catherine, have four children. Only one, Trevor, 25, has left the Island. He spent some time in a Kibbutz in Israel and is now teaching at a special school. Their other son, Graham, now runs the family bakery in the High Street. And he has plans to build a new bakery.

Mr. Stevens says: “I suppose you could say we have put down our roots here. People may make fun of Canvey but when you’ve watched it grow like we have, from a community with no roads and no services to a thriving centre, you can’t help feeling proud.”