Approach Road Opens with a Demo

Some of the police officers at the refinery demonstration

The demo, had been called by Cllr. Brian Beasley, Tory leader of Canvey Council, against the latest oil refinery which had received planning permission from Mr. Geoff­rey Rippon, Secretary of State for the Environment. A crowd assembled and marched towards the cere­mony. They were held at a distance by police officers, who linked their arms. Both Cllr. Beasley and the Police urged a peaceful demonstra­tion but, at times, there were scuffles. 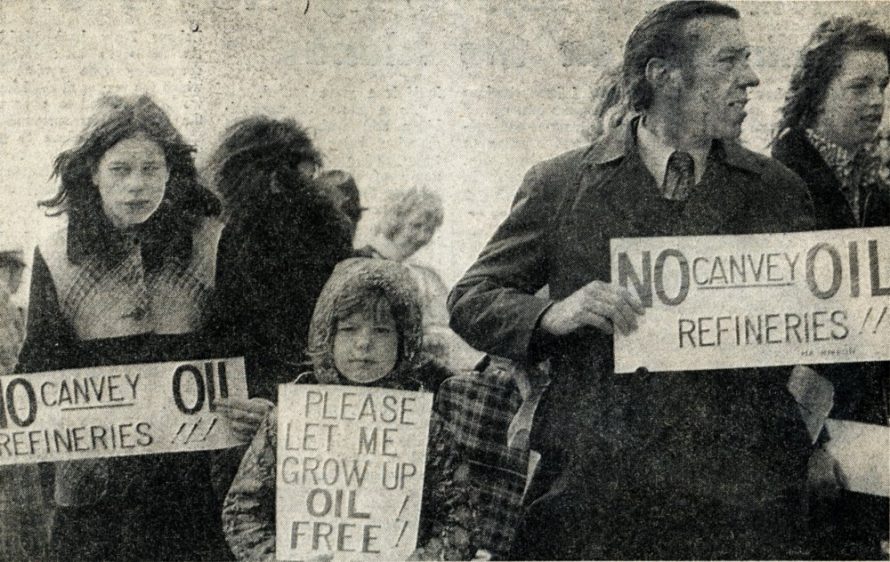 Council leaders invited for the occasion and other guests experienced difficulty in getting through the crowd, some of whom carried banners and notices against the refinery. Cllr. Don Allen, chairman of Canvey Council, against the noise of the crowd, at­tempted to make an introduc­tion.

He said: “On behalf of my Council I extend a very hearty welcome to our District on this very important occasion.Many of you will know that the opening of this road will realise the hopes and ambitions of Canvey Urban District Council, not only since the East Coast floods of 1953 but even farther back. I am informed that ‘far sighted’ people in the ’30s recognised the need for a better communication system and had planned a high level bridge link between Benfleet and Canvey Island.This was eventually abandoned for the present proposal, which I personally regard as altogether more satisfactory.

For a decade or more Canvey has been one of the fastest growing urban areas in the County and the new Approach Road is essential for our traffic needs. But it has a more important function for it will provide an additional and more effective link with the mainland in the event of tidal flooding. Although such a risk is remote it is comforting to know that emer­gency traffic will be able to move more freely should the need ever arise.Indeed, it was the recog­nition of this need, I am informed, that eventually made the provision of the Approach Road a very high priority.

I intend to be brief. But before I formally introduce Alderman Daniels it is my wish to convey the thanks of my Council to everyone in­volved in making the road, possible, either for their part in the past or in more recent

In thanking you all I have a very special word of praise for the Contractors and their men. They have overcome not only a number of engineering problems but also the physical discomfort of working in extreme weather conditions.

It is my pleasure now to introduce County Alderman R. G. R. Daniels, Chairman of the Essex County Coun­cil’s Highways Committee, who will formally open the new Approach Road. Alder­man Daniels’ contribution to public life is well-known to everybody and it is enough for me to say that he is Chairman of one of the bus­iest Highways Committees in this land.

Sir, you have never been reluctant to come down to Canvey and discuss our prob­lems. Your understanding and help has always been apprec­iated by my Members and it is our special pleasure that you have agreed to open the new Approach Road this morning and I now invite you so to do.”

The official opening cere­mony was carried out by Alderman R. G. R. Daniels, chairman of the Essex County Highways Committee. He did so against a verbal barrage. He emphasised that the County Council had op­posed and still did oppose the refinery and he said that the demonstrators would not make any headway. The only way was round a table with the Minister. The County Council were going to fight it but the demonstrators were just ‘blowing their top’. The County Council were going to do it the democratic way. Alderman Daniels gave de­tails of the cost of the pro­ject and thanked people con­nected with it. He then cut the white ribbon. A response to his speech was not given officially.

A cavalcade of cars then traversed the road. On their return Alderman Daniels, Cllr. Allen and Cllr. Ray Howard (Canvey Council’s Highways and Works Chairman) got out of the cars and briefly joined some of the demonstrators, after an appeal to show that they were with them. A private luncheon followed {unreadable………………….}. 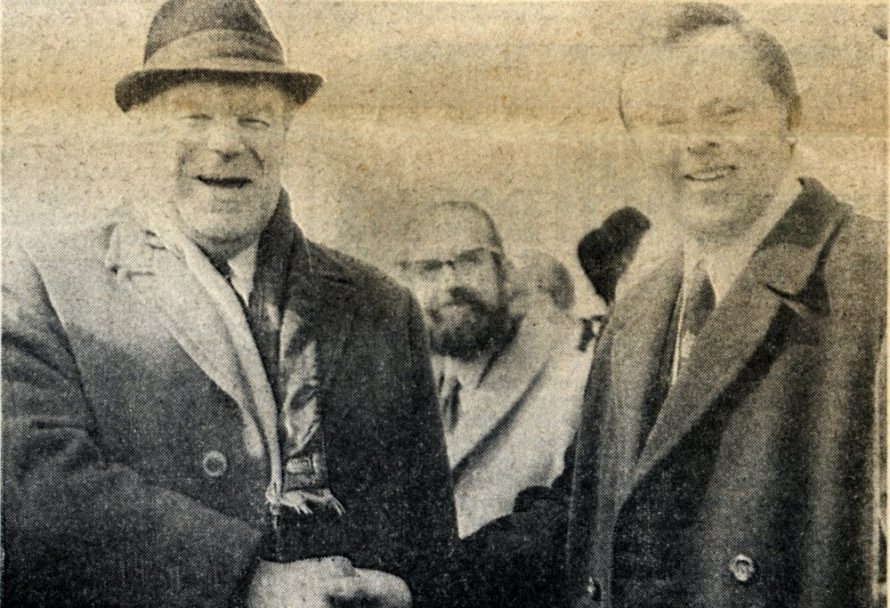 The inadequacy of road ac­cess to Canvey via the old opening bridge near South Benfleet Station and the B.1014 road had been apparent for many years. Mr. R. Bradley, County Surveyor, laid down the line of the Approach Road as early as 1952. Development of the proposal was stimulated by the East Coast floods of 1953 which affected Canvey. Since then population and traffic growth and the granting of planning permission for an oil refinery have exacerbated the position regarding road access to the Island.

Police officers linked arms to hold back demonstrators, estimated by the organiser as about 200, at the refinery demonstration

Detailed consideration of alternative means of access to the Island led to the con­clusion that a separate Approach Road from A.13 near Tarpots to the B.1014 on Canvey, involving a new crossing of East Haven Creek was re­quired, together with the re­placement of the old Canvey opening bridge, which was in­adequate for present-day con­ditions.

Because a crossing of tidal water is involved, Parliament­ary procedure had to be fol­lowed. Royal Assent to the Essex County Council (Canvey Island Approaches, etc.) Bill was received in 1967. The Act provided for the works, in­cluding the replacement of the old opening bridge to be com­pleted in a five-year period. 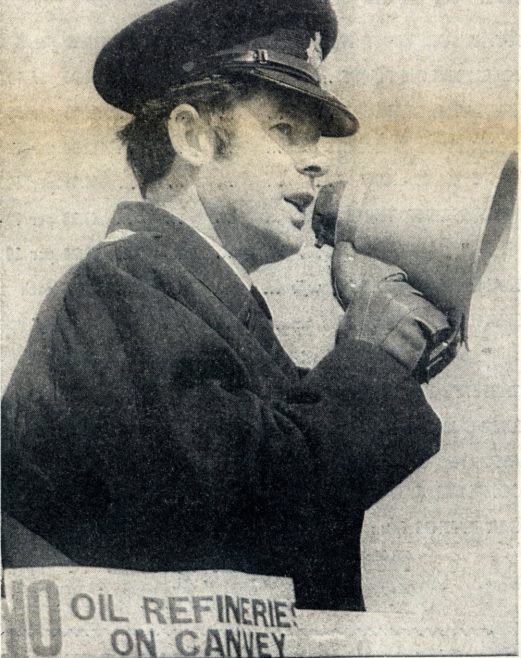 A police appeal for order is made

It was accepted by the then Minister of Transport in 1966 that the new Approach Road should be a principal road at­tracting 75% grant. The prep­aration of the overall design and roadworks details was carried out by Essex High­ways Department, the three structures involved being de­signed by Messrs. Rendel, Pal­mer and Tritton, Consulting Engineers, Southwark Bridge House. 61 Southwark Street. London, S.E.I.

Tenders for the construction of the Approach Road were invited in early summer 1970 from a selected list of contractors. A tender by Kier Limited, Tempsford Hall, Sandy, Beds., in the sum of £2,I71,833 (not including contingencies) was accepted and the contract commenced on October 13th 1970. The total estimated cost of the Approach Road is £2,550,000, including land.

Roadworks consist of a new road with a single 24ft. wide carriageway in flexible con­struction, from the London Road (A.13) at a point im­mediately west of the bound­ary between the Basildon and Benfleet Urban Districts, to the Canvey Road (B.1014) on Canvey, at a point a short distance south of Benfleet Creek, and new roundabouts at the connections of the new road with the aforementioned roads A.13 and B.1014. The length of new road between roundabouts is approximately two-and-a-half miles.

Earthworks on the mainland included the excavation of a cutting in London clay up to a depth of 35ft., the forma­tion of embankments up to some 11ft. depth, under part of proposed embankment. On Canvey an embankment has been formed in pulverised fuel ash over alluvial deposits.

Structural work comprised the construction of three bridges, all on piled founda­tions, details of which are given below:—

At East Haven Creek both sea walls have been raised and realigned for short lengths. The Creek low water channel has been realigned and a sur­face water outfall constructed through a sea wall. 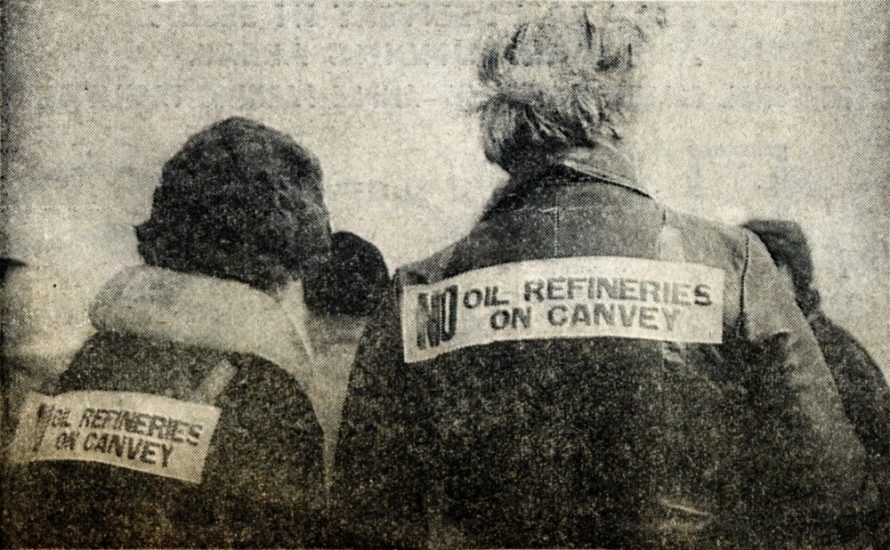 Unusual poster ‘hordings’ at the demonstration

The contract involved a number of unusual or difficult features, as follows:—

The embankment had to be built on very soft alluvial soil up to 40 feet deep, overlying clay. There was considerable danger that the weight of an embankment would displace the soft mud causing danger­ous slips. The problem was overcome (a) by using light­weight filling material known as pulverised fly ash (P.F.A.) and (b) by controlling the rate at which P.F.A. was placed by using instruments known as piezometers to measure pressures under the embankment to ensure that dangerous conditions were not set up. These measures were successful.

{unreadable} supported on groups of piles which carry the loads down to firmer clay 60 feet or more below ground. The piles mainly consisted of steel tubes which were driven to the re­quired depth and then filled with concrete. Difficulty arose when piles which had appar­ently been firmly driven set­tled more than the permiss­ible amount under test load­ing. Work was delayed for about eight weeks whilst de­sign assumptions were checked and the lengthening of some-piles was carried out.

East Haven Viaduct is con­structed as a continuous deck over 2,000 ft. long. Provision had had to be made for the structure to expand and con­tract over a range of 15 inches. The Maurer expansion joint is at the Canvey abutment, the deck being fixed at the mainland end. Sliding bearings are provided at each pier to allow the deck to move during temperature changes. The setting of each bearing was calculated by computer, having regard to temperature and shrinkage at the time of fixing.

‘Go slow’ and total stop­page of work occurred during selective industrial action by civil engineering operatives during July, August and Sep­tember 1972. Eight weeks ex­tension of contract was granted on this account.

An error in the detailing of steel reinforcement on the recently concreted span 31 was discovered late in November {unreadable……………..}{unreadable…..} tensile steel bars have been concreted beneath the original slab. 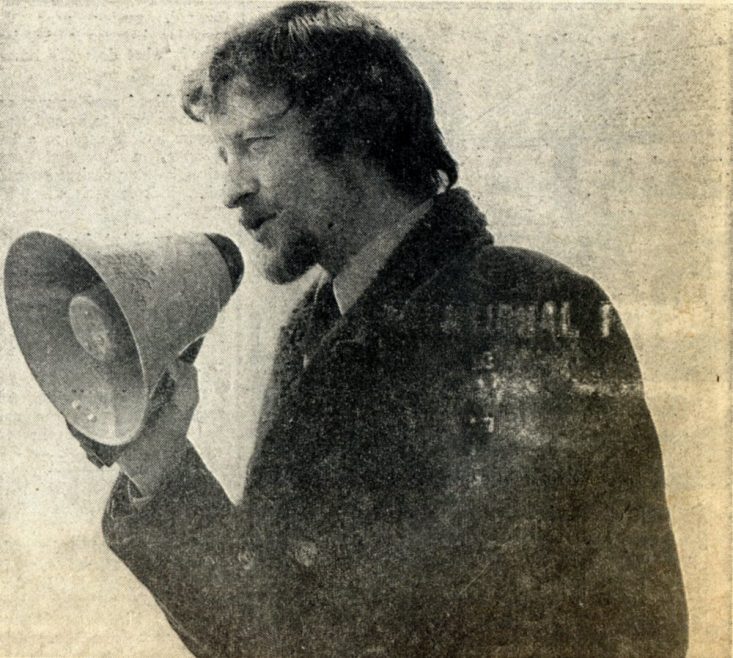 In a letter to this newspaper Councillor Brian Beasley said: “May I through the medium, of your paper express my per­sonal thanks to those 200 or so people who braved very icy winds to demonstrate against the E.N.I. Oil Refin­ery on Monday.

“If this is an example of the spirit of the people of Canvey and Benfleet, then all is not lost, and we can look forward to further demon­strations of our desire to rid ourselves of such monstrous industrial developments.

“I would also like to thank Ald. Daniels who, if rather belated, did eventually join with us which is more than can be said for Canvey’s two County Councillors, and the numerous local Councillors who were present.”