From the Canvey News and Benfleet Recorder September 1971. 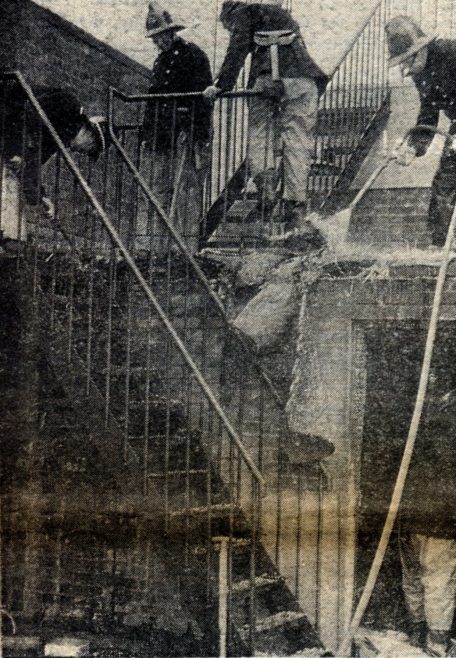 A split-second turnout by Canvey firemen prevented a fire getting a hold on a Tesco supermarket in Furtherwick Road on Saturday morning. A fire broke out in an out­side store-room and threatened the shop.At once the store’s fire drill went into smooth action. Staff shepherded customers out of the building as the alarm, re­inforced with a message over the internal loud-speaker sys­tem, was sounded. The staff were the last to leave the smoke-filled store.

Canvey firemen under Lead­ing Fireman Geof. Barsby, tackled the blaze. They were reinforced by mainland men and firemen, wearing breathing apparatus, searched to make completely sure no one was trapped. The effect of the fire inside the store was smoke. The brigade prevented flames from breaking through. Fire fighters had to fight their way through thick holi­day traffic which was control­led by police officers.

The outbreak was brought under control and later the store was re-opened. Smoke-tainted cakes and other food were withdrawn and destroyed. Manager Mr. Michael J. Bowman, who expressed satis­faction at the brigade’s prompt response said “There was no panic. All left the building quietly.”

FIRST AID NOTE: Firemen found time to give first-aid — to a youngster who got a wasp sting.

Canvey and Hadleigh fire­men were called there again on Sunday when a fire broke out near the same place as the previous day.