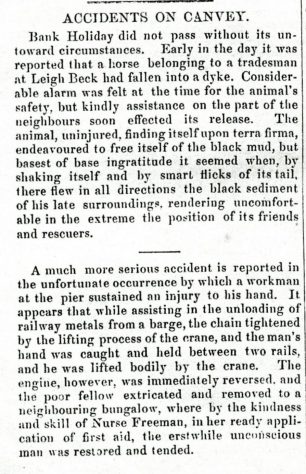 Bank Holiday did not pass without its un­toward circumstances. Early in the day it was reported that a horse belonging to a tradesman at Leigh Beck had fallen into a dyke. Consider­able alarm was felt at the time for the animal’s safety, but kindly assistance on the part of the neighbours soon effected its release. The animal, uninjured, finding itself upon terra firma, endeavoured to free itself of the black mud, but basest of base ingratitude it seemed when, by shaking itself and by smart flicks of its tail, there flew in all directions the black sediment of his late surroundings, rendering uncomfort­able in the extreme the position of its friends and rescuers.

A much more serious accident, is reported in the unfortunate occurrence by which a workman at the pier sustained an injury to his hand. It appears that while assisting in the unloading of railway metals from a barge, the chain tightened by the lifting process of the crane, and the man’s hand was caught and held between two rails, and he was lifted bodily by the crane. The engine, however, was immediately reversed, and the poor fellow extricated and removed to a neighbouring bungalow, where by the kindness and skill of Nurse Freeman, in her ready appli­cation of first aid, the erstwhile unconscious man was restored and tended.