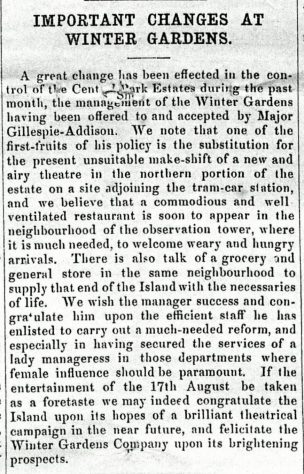 A great change has been effected in the con­trol of the Central Park Estates during the past month, the management of the Winter Gardens having been offered to and accepted by Major Gillespie-Addison. We note that one of the first-fruits of his policy is the substitution for the present unsuitable make-shift of a new and airy theatre in the northern portion of the estate on a site adjoining the tram-car station, and we believe that a commodious and well ventilated restaurant is soon to appear in the neighbourhood of the observation tower, where it is much needed, to welcome weary and hungry arrivals. There is also talk of a grocery and general store in the same neighbourhood to supply that end of the Island with the necessaries of life. We wish the manager success and congratulate him upon the efficient staff he has enlisted to carry out a much-needed reform, and especially in having secured the services of a lady manageress in those departments where female influence should be paramount. If the entertainment of the 17th August be taken as a foretaste we may indeed congratulate the Island upon its hopes of a brilliant theatrical campaign in the near future, and felicitate the Winter Gardens Company upon its brightening prospects.