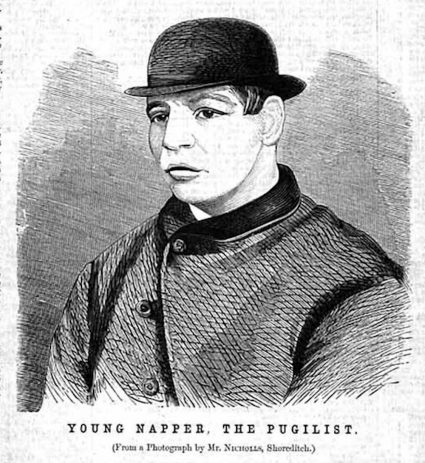 Another “pugilistic exhibition” took place on Tuesday, and terminated in a scene of riot, hubbub, and confusion that baffles anything like an adequate description. The belligerents on this occasion were two men, cockney born, of the respective names of Napper and Baldock, who were “pitted” to contend for £250, £150 of which being laid by Baldock’s backers against £100 deposited by those of Napper. The heroes of the day were more “pets” of the “fraternity” than of the patrons of the ring. They were young men who had acquitted themselves with great doggedness, and some science within the ropes, and were consequently admitted to be by their associates “thoroughbred *uns” who would ensure their audience good sport. And, certainly, if sport is to be found in two bull-headed beings, who enrage each other by the exchange of blows till they kick, bite, and try to gouge each other’s eyes out, and that, too, amid the deafening and blasphemous shouts of the partisans, why, then, these men acquitted themselves to the letter.

A great delay took place before every one succeeded in getting on board the boat; but this being once accomplished, she steamed down the river. Arriving off Thames Haven the party were landed in boats on the Essex shore, at a place called Canvey Island, near Booth Bemfleet. The men who had charge of the ropes and stakes were among the first to land. On gaining terra firma they selected a suitable spot, and the ring was pitched without loss of time. The usual 5s. was charged for admission to the outer ring, and 5s. for a seat, but the audience in this special part was very limited indeed. Napper was the first to enter the arena, greeted loudly by his partisans; Baldock next stepped in, and was, like his antagonist, very loudly cheered. Baldock won the toes for choice of ground, and then they retired to their corners for the purpose of “stripping.” Simultaneously with this proceeding, however, a gentleman attached to a London sporting paper, who upon previous occasions had stood referee, stepped into the ring, and produced a letter from his editor, who objected to his fulfilling that office on the occasion. This announcement gave rise to expressions of the greatest indignation on the part of the seconds, who swore that if the above-mentioned gentleman persisted in his resolve not to stand referee there would be an end of the fight, and that he and his editor would have to abide by the consequences.

A long and continued controversy ensued, and finally the said gentleman consented to stand. Both men then advanced, and having shaken hands, the fight commenced, £30 to £10 being offered on Baldock. They fought the first four rounds with great determination, exchanging heavy blows, and in each round falling across the ropes, and being extricated from their position by their seconds. In the fifth round they exchanged some terrific blows, and finally closing, Napper again threw his man across the ropes and there kept him. The seconds on both at once rushed to tbe rescue, and after a great deal of struggling they succeeded in pulling the men inside; they fall heavily to the ground, Baldock uppermost, and one of the seconds on him. This gave rise to shouts and hisses, and cries of “foul, foul,” and “shame.” An appeal was made to the referee, who decided that the fight should proceed. Both men were up to time in the sixth round; and after the exchange of heavy blows Rapper threw his man, and, falling on him, tried to force his fingers into his antagonist’s eyes. They were, however, carried to their corners, and were up in the seventh round to time. Some most terrific blows were again exchanged, and again they closed and fell on the ropes, and had to be separated by their seconds. The same thing also occurred in the eighth round, with the exception that both men grew more desperate, and sought to gouge, bite, and kick each other. In the ninth round the men closed and fell, and were literally pulled apart by their seconds, between two of whom a most violent dispute arose. They both, to the astonishment of the lookers on, pulled life-preservers out of their pockets and would have exchanged some serious  blows, had it not been for the timely interference of the other two seconds.

A kind of tenth round was commenced, but one of the seconds, arguing and shouting wildly in the cause of his man, struck or pushed the referee from his seat; whereupon that official instantly rose, and declared his intention to leave the ring, and refused to give a decision with regard to the result of the fight. This declaration caused the wildest protestations of Baldock’s seconds, who threatened almost the annihilation of the referee. Still the referee stick to his resolve; and, after some considerable time, succeeded in extricating himself from the bullying crowds that surrounded him, and walked away.