The Dutch Clog Bike - 18in high

Will Have a Place in Canvey Carnival 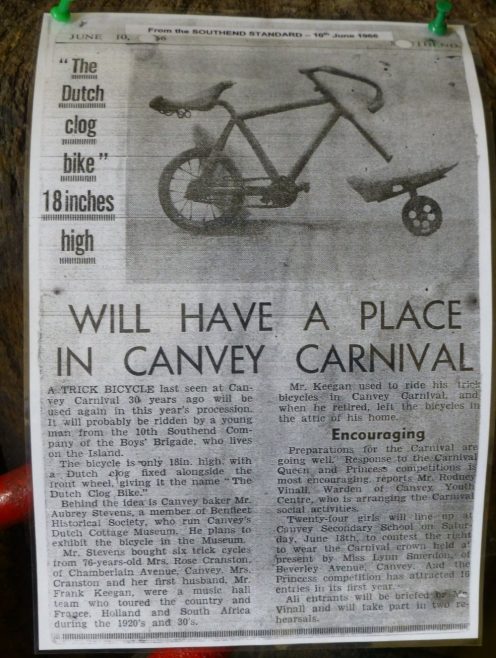 
A trick bicycle last seen at Canvey Carnival 30 years ago will be used again in this year’s procession. It will probably be ridden by a young man from the 10th Southend Company of the Boy’s Brigade, who lives on the Island.

The bicycle is only 18 in high, with a Dutch clog fixed alongside the front wheel, giving it the name “The Dutch Clog Bike”.

Behind the idea is Canvey baker Mr Aubrey Stevens, a member of Benfleet Historical Society, who run Canvey’s Dutch Cottage Museum. He plans to exhibit the bicycle in the Museum.

Mr Keegan used to ride his trick bicycles in Canvey Carnival, and when he retired, left the bicycles in the attic of his home.

Preparations for the Carnival are going well. Response to the Carnival Queen and Princess competitions is most encouraging, reports Mr Rodney Vinall, Warden of Canvey Youth Centre, who is arranging the Carnival social activities.

Twenty-four girls will line-up at Canvey Secondary School on Saturday, June 18th, to contest the right to wear the Carnival crown held at present by Miss Lynn Smerdon, of Beverley Avenue, Canvey. And the Princess competition has attracted 16 entries in its first year.

All entries will be briefed by Mrs Vinall and will take part in two rehearsals.