A very interesting article show the owner of The Canvey News before the McCave family came on the scene. Henry McPherson Clark was born in 1878. Henry and his wife resided at ‘Bona Venture’, Lakeside Path according to the 1929 electoral register. 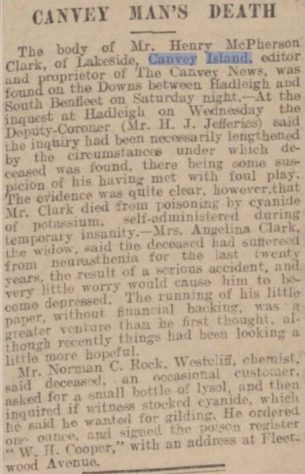 The body of Mr Henry McPherson Clark, of Lakeside, Canvey Island, editor and proprietor of The Canvey News was found on the Downs between Hadleigh und South Benfleet on Saturday night.- At the inquest at Hadleigh on Wednesday the Deputy-Coroner (Mr. H. J. Jefferies) said the inquiry had been necessarily lengthened by the circumstances under which de­ceased was found, there being some suspicion of his baring met with foal play.

The evidence was quite clear, however, that Mr. Clark died from poisoning by cyanide of   potassium, self-administered during temporary insanity.– Mrs. Angelina Clark, the widow, said the deceased had suffered from neurasthenia for the last twenty years, the result of a serious accident, and very little worry would cause him to become depressed. The running of his little paper, without financial backing was a great venture than he first thought, although recently things had been looking a little more hopeful.

Mr Norman C. Rook, Westcliff, chemist said deceased, and occasional customer, asked for a small bottle of Lysol, and then inquired if witness stocked cyanide, which he said he wanted for gilding. He ordered one ounce, and signed the poison register “W.H.Cooper,” with an address at Fleetwood Avenue.