The formal inauguration of the scheme for a bridge over the Thames from Benfleet to Canvey Island took place on Wednesday, when, at the foot of the Causeway on the Canvey side, the Lord-Lieutenant of Essex (Brig.-Gen. R. Colvin, C.B.) drove the first pile. The bridge has been made possible by the help of the Ministry of Transport, fol­lowing on the completion of the recon­struction of Long Road across the Island, a 50 per cent, grant from the Road Fund being given towards the estimated cost of £18,525.

The Archdeacon of Southend offered prayer “that the building of this bridge, begun, continued, and ended in Thee, may promote the glory of God and Thy kingdom.” The Lord-lieutenant pulled the lever that released the dummy to the appointed pile, and as it fell and sent home the heavy log some six to eight inches there were cheers, and the Union Jack was unfurled.

Baby Fisk, niece of the Reception Com­mittee Chairman, presented Lady Gwen­doline with a bouquet of carnations, and Baby Hawkins handed a similar one to Lady Fane.

At luncheon in the sports pavilion Mr. G. H. J. Chambers in the chair, the Lord-Lieutenant proposed the health of the chairman and members of the Urban Council. He congratulated all men who gave their time and ability to doing all they could do to assist their neighbours and the community generally. He congratulated Canvey on that red-letter day, and on the success, of their efforts in overcoming the many obstacles that were always in the way of any under­taking like that—he included, of course, the Essex County Council. (Laughter). The history of Canvey Island almost be­gan from that day. (Hear, hear).

The Chairman, in reply, said there were many who had gone across the sea who owed their lives to that district. He himself had been given up by the doctors, but since he came to Canvey he had been spared to torment a few more of them a little more. (Laughter). They had the lowest rainfall of any place in England, and, on the authority of their Vicar, there was only one place which had more sunshine. In honour of that day the bridge could not be known henceforth otherwise than as the Colvin bridge. (Applause).

Ald. H. E. Brooks, in proposing the health of the Lord-Lieutenant, said there was the history of the Danish invasion associated with Benfleet Creek. Essex seemed to be regarded as a centralised county, but to those who knew and loved the county there were histori­cal associations that equalled other parts.

The Lord – Lieutenant, in reply, said he was indeed honoured by the suggestion that the bridge should have his name associated with it. He hoped to be spared to witness its completion and its opening.

Mr H. J. A. Bensley proposed “The Engineer” (Mr.Deane)and Mr. F.J. Leach proposed “The Contractor’ (Mr Farr), and Mr.A. C. Crane presented the Lord-Lieutenant with a model of a pile-driver in silver. 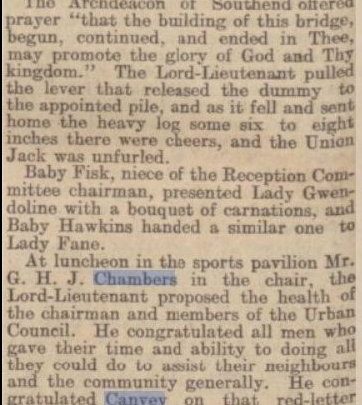