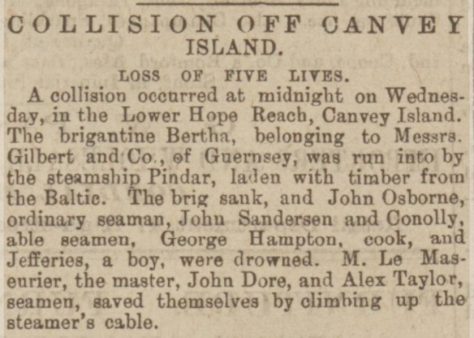 A collision occurred at midnight on Wednes­day, in the Lower Hope Reach, Canvey Island. The brigantine Bertha, belonging to Messrs. Gilbert and Co , of Guernsey, was run into by the steamship Pindar, laden with timber from the Baltic. The brig sank, and John Osborne, ordinary seaman, John Sanderson and Conolly, able seamen, George Hampton, cook, and Jefferies, a boy, were drowned. M. Le Maseurier, the master, John Dore, and Alex Taylor, seamen, saved themselves by climbing up the steamer’s cable.