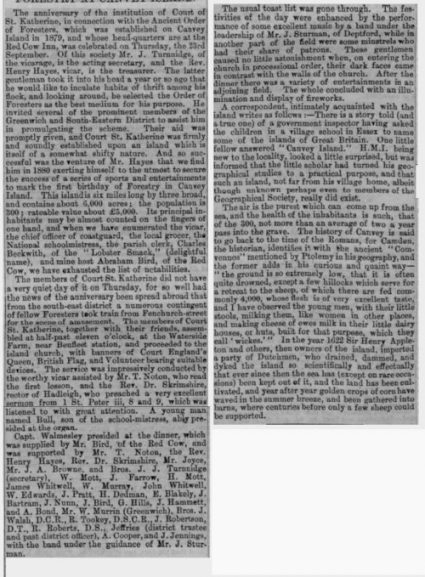 Newscutting from the Essex Newsman 1880

The anniversary of the institution of Court of St. Katherine, in connection with the Ancient Order of Foresters, which was established on Canvey Inland in 1879, and whose headquarters are at the Red Cow Inn, was celebrated on Thursday, the 23rd September. Of this society Mr. J. Turnnidge, of the vicarage, is the acting secretary, and the Rev. Henry Hayes, vicar, is the treasurer. The latter gentleman took it into his head a year or so ago that he would like to inculate habits of thrift among his flock, and looking around, he selected the Order of Foresters as the best medium for his purpose. He invited several of the prominent members of the Greenwich and South Eastern District to assist him in promulgating the scheme. Their aid was promptly given, and Court St. Katherine was firmly and soundly established upon an island which is itself of a somewhat shifty nature. And so suc­cessful was the venture of Mr. Hayes that we find him in 1880 exerting himself to the utmost to secure the success of a series of sports and entertainments to mark the first birthday of Forestry in Canvey Island. This island is six miles long by three broad, and contains about 6,000 acres; the population is 300; rateable value about £5,000. Its principal in­habitants may be almost counted on the fingers of one hand, and when we have enumerated the vicar, the chief officer of coastguard, the local grocer, the National schoolmistress, the parish clerk, Charles Beckwith, of the “Lobster Smack,’ (delightful name), and mine host Abraham Bird, of the Red Cow, we have exhausted the list of notabilities.

The members of Court St. Katherine did not have a very quiet day of it on Thursday, for so well had the news of the anniversary been spread abroad that from the south-east district a numerous contingent of fellow Foresters took train from Fenchurch-street for the scene of amusement. The members of Court St. Katherine, together with their friends, assem­bled at half-past eleven o’clock, at the Waterside Farm, near Benfleet station, and proceeded to the inland church, with banners of Court England’s Queen, British Flag, and Volunteer bearing suitable devices. The service was impressively conducted by the worthy vicar assisted by Mr. T. Noton, who read the first lesson, and the Rev. Dr. Skrimshire, rector of Hadleigh, who preached a very excellent sermon from 1 St. Peter iii, 8 and 9, which was listened to with great attention.  A young man named Bull, son of the school-mistress, ably presided at the organ. 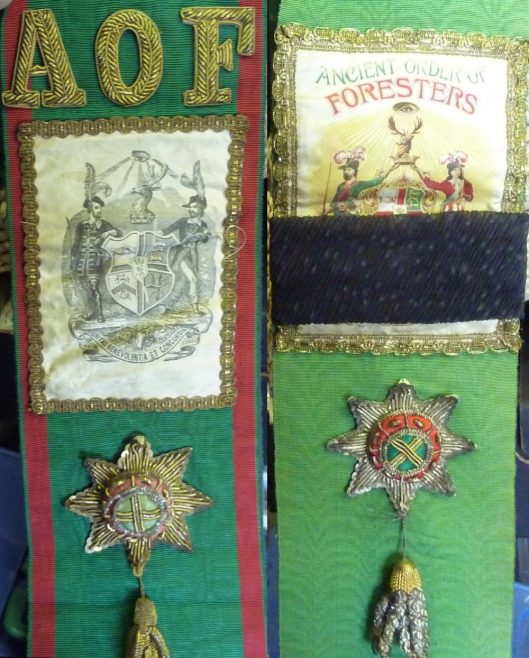 The usual toast list was gone through. The fes­tivities of the day were enhanced by the perfor­mance of some excellent music by a band under the leadership of Mr. J. Sturman, of Deptford, while in another part of the field were some minstrels who had their share of patrons. These gentlemen caused no little astonishment when, on entering the church in processional order, their dark faces came in contrast with the walls of the church. After the dinner there was a variety of entertainments in an adjoining field. The whole concluded with an illu­mination and display of fireworks.

A correspondent, intimately acquainted with the island writes as follows:—There is a story told (and a true one) of a government inspector having asked the children in a village school in Essex to name some of the islands of Great Britain.   One little fellow answered “Canvey Island.”   H.M.I, being new to the locality, looked a little surprised, but was informed that the little scholar had turned his graphical Studies to a practical purpose, and that such an island, not far from his village home, albeit though unknown perhaps even to members of Geographical Society, really did exist.

The air is the purest which can come up from sea, and the health of the inhabitants is such, of the 300, not more than an average of two a year pass into the grave. The history of Canvey is said to go back to the time of the Romans, for Camden, the historian, identifies it. with the ancient “Comvennos” mentioned by Ptolemy in his geography, and the former adds in his curious and quaint way— “ the ground is so extremely low, that it is often quite drowned, except a few hillocks which serve for a retreat to the sheep, of which there are fed com­monly 4,000, whose flesh is of very excellent taste, and I have observed the young men, with  little stools, milking them, like women in other places, and making cheese of ewes milk in their little dairy houses, or huts, built for that purpose, which they call ‘wickes.’ “

In the year 1622 Sir Henry Appleton and others, then owners of the island, imported a party of Dutchmen, who drained, dammed, and dyked the island so scientifically and effectually that ever since then the sea has (except on rare occa­sions) been kept out of it, and the land has been cultivated, and year after year golden crops of corn have waved in the summer breeze, and been gathered into barns, where centuries before only a few sheep could be supported.