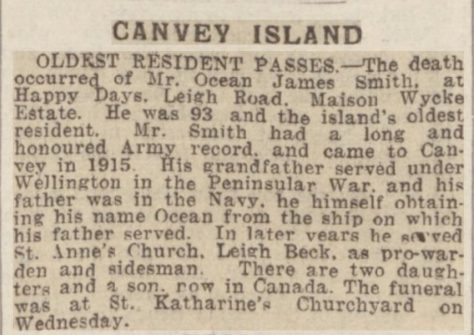 Oldest Resident Passes .-The death occurred of Mr Ocean James Smith, at Happy Days, Leigh Beck. Maison Wycke Estate. He was 93 and the Island’s oldest resident. Mr Smith had a long and honoured Army record and came to Canvey in 1915. His grandfather served under Wellington in the Peninsular War and his father was in the Navy he himself obtaining his name Ocean from the ship on which his father served. In later years he served St Anne’s Church, Leigh Beck, as Pro-warden and sidesman. There are two daughters and a son now in Canada. The funeral was at St Katherine’s Churchyard on Wednesday.

If anyone can tell us any more about Ocean James Smith please comment below.