From an article in the Southend Telegraph, Leigh and Shoeburyness Recorder 1902. We had the pictures we now know the story. Thanks to Martin Lepley for sending us the clipping.

When the old festivals come round year by year the newspapers of this country invariably come out with articles telling us how they used to be kept in the ‘good old days,’ and then deploring the fact that nobody worth mentioning troubles to keep them now. It is with a feeling of pleasure, therefore, we take up the pen, not with the purpose of dilating on either of these fast becoming timeworn themes, but to chronicle within our own district a right royal celebration of the exploit of that villain, Guy Fawkes.

At mid-day on the never-to-be-forgotten fifth the Emperor of Benfleet (he of the house of Georgeland) set out to pay a state visit to His Highness the King of Canvey Island (of the Clarke dynasty). The Lord Mayor of Benfleet (Mr George A Greig) formed a procession at the sign of the ‘Anchor,’ and it marched to the accompaniment of the full bands of the Benfleet Highlanders, Horse Guards, and Light Infantry. As became the mirthful occasion, these well-known bands for once threw aside their beautifully toned instruments and reams of classical compositions, and made melodious music on pipes, drums, tim whistles, mouth organs, and concertinas – a change whereat the revellers were much delighted. On reaching the ‘Hoy’ a halt was made to receive the Mayoress, Lady Greig, who had arrayed herself as Britannia. 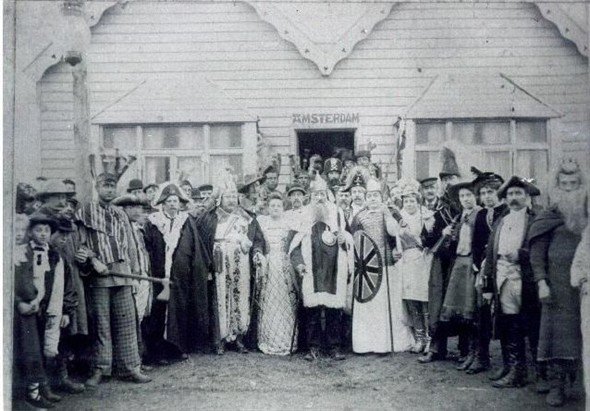 Canvey Creek was crossed in the Imperial State Barge; His Highness being personally attended by his Viceroy, Postmaster General, and Lord High Chambermaid. On the other side, the two monarchs met, and their royal and affectionate greetings were such as mere municipal potentates may envy but never realised. The King was accompanied by the Lord Mayor, the Archbishop of Canvey, and all the nobility; they made a gallant spectacle as they foregathered on the beautiful slopes of the north side of the island, and contemplated the passage of their imperial guests across the Rhine of Essex, as the historian has called Canvey Creek.

The Canvey tribe of Wild West Indians were graciously permitted to participate in the welcome, their brown skins and barbaric attire contrasting strangely with the old English costumes of the royal parties. The procession made its way to the King’s bungalow, where speeches of welcome were made, and the Aborigines gave a grand war dance. Towards the evening a huge bonfire was lit, which greatly pleased the many merry makers assembled on the island and that much burnt individual Guy Fawkes was conveyed from the King’s house and consumed by the fire thereon. 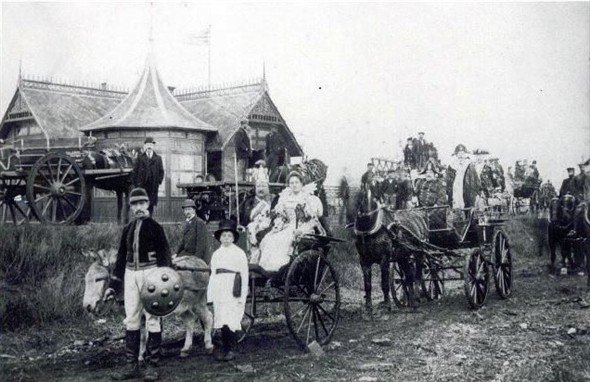 In the afternoon a somewhat more modern attraction was provided in the shape of a horse and cart parade, in which the following were the winners:-

On Thursday morning Southend was invaded by a band of Indians, clowns, jockeys, and other carnival characters, and quite a number accompanied them to their island home by the 2-25 train to Benfleet. Their bugler blew a mighty blast before the train left, and a motley crew they looked as they entrained with their murderous looking guns, pistols and tomahawks. Arriving at Benfleet they lined up on the little piece of land which serves as a pier for the ferry boat. A party of soldiers were crossing at the time and the foremost Indian levelled his pistol at the boat, putting as he did so the finishing touch to a picture which might well have illustrated a Fenimore Cooper novel.

A long muddy walk and the winter gardens were reached. After several yards of leafy beauty, a group of men are approached bidding for plots – combining business and pleasure evidently. Passing a nigger band, we sought Mr Rayner. An Indian was approached, but conveyed to us in some strange guttural sounds that he did not know English. He managed to however, “Can you trust yourself with me?” We assured him of our conviction that he belonged to a friendly tribe, and after traversing the leafy jungle for some distance we came upon Mr Rayner trying to induce some young ladies to try their prowess at nail driving, for which feat prizes were offered in the comic race programme.

We proceeded to Mr Raynor’s office, which was crammed with entrants for the various events. The comic races came on shortly after four in a large arcade. The state dignitaries of the island made their way down the course at the opening, followed by Ally Sloper, whom the officials declined to enter for the boys’ race because he was not under six. Sack, wheelbarrow, and other amusing races were held, to the accompaniment of the nigger band.

In the evening a greasy pole competition was held. 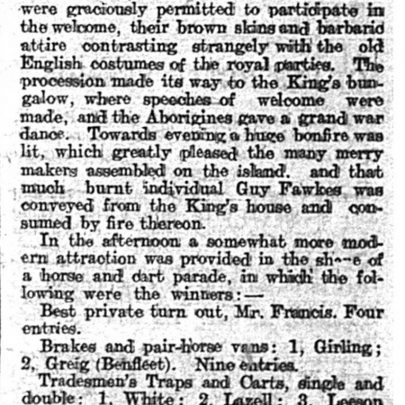